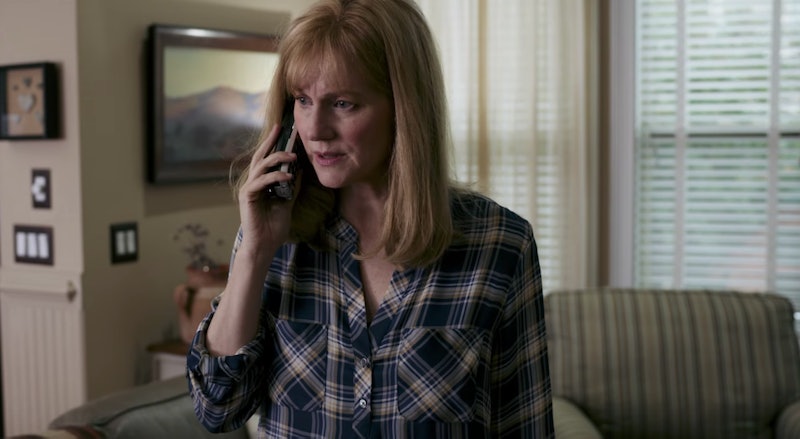 When Sully hit theaters on Sept. 9, it officially kicked off the 2017 Oscar season. The ripped-from-the-headlines true story of the "Miracle on the Hudson", directed by Clint Eastwood and starring Tom Hanks as the famous Captain Chesley Sullenberger (aka Captain Sully), has Oscar bait written all over it. It's got all traditional awards boxes checked: Eastwood, Hanks, a true story of American heroism, and a pretty traditionally constructed narrative — including, sadly, a female character relegated to playing the supportive wife to the lead, male hero. Sully features Laura Linney in the thankless, one-dimensional "wife" role of Lorraine Sullenberger, a character who primarily appears in the background in order to dramatize Sully's own internal conflicts, not any of her own. And unfortunately, this cliched female role is not specific to Sully, but just the latest example of a frustrating trend in Hollywood films.

The type of "wife" role seen in Sully and so many films is one that seems insistent on taking female actors for granted, on reducing their characters to only be defined by their identity as wives. This woman is solely defined by her relationship to the (male) protagonist, doesn't exist beyond her relation to him, and rarely, if ever, has scenes separate from her husband, ensuring that the audience only recognizes her in relation to the hero. It's a tired, frustrating stereotype, and one too often used in movies, particularly those deemed Oscar-bait. Far too many prestigious Hollywood films that use the "wife" role as a plot device cast Academy-Award nominated female actors in those roles, ignoring their talents and reducing them to cliches. In Sully, it's Linney, a three-time Oscar nominee, who falls into this trope.

Introduced to the audience as the woman Sully calls immediately after being rescued from the Hudson, Linney's character never evolves past being Sully's wife. In the film, Lorraine has no reason to exist other than to support Sully and offer him her concerned support. The only person audiences see her interacting with is her husband, and even then, it's always by phone. That's right, Linney and Hanks never actually share the screen in Sully, and their phone scenes, due to their focus on Sully, force the audience to identify more heavily with Hanks' character. We, as an audience, are with Sully, but are only visiting Lorraine, making her the outsider. She's the very definition of an expendable character, appearing in only a handful of scenes. Furthermore, she appears as one of only two women of real consequence in Sully.

It'd be disappointing regardless to see this type of part exist in such a high-profile film, but it's even more aggravating seeing Linney in the role. By casting such a high profile, recognizable, and respected name in this part, Hollywood is seemingly sending the message that, despite female actors achieving huge success, they still can be relegated to meaningless supporting parts. The best actors like Linney can hope for, it seems, is to play wives of powerful men in Oscar-bait films, instead of leading awards-worthy movies of their own. Linney's last few roles on the big screen, for example, were supporting parts in Teenage Mutant Ninja Turtles: Out of the Shadows, the little-seen Mr. Holmes and The Fifth Estate — not exactly major leading roles.

It's understandable why she'd take the part in Sully; Lorraine Sullenberger may not be a great character, but the chance to work with Hanks and Eastwood would seem to make it a great job. And make no mistake, Linney is superb in Sully, just as Marisa Tomei was in her one scene in The Big Short as Steve Carrell's wife and Amy Ryan was in Bridge of Spies as Hanks' spouse. But the quality of Linney's performance does not mean that the role of Lorraine — as it is written in the script — is worthy of her talent or her time.

What makes Linney's character, and the overall "wife" trend, so frustrating isn't just the overwhelming sense that only men can be heroes in award-winning films, or that women at the top of their game can't lead prestigious movies of their own. What's worse is the message these "wife" roles send to female audiences. Most of the Oscar-bait films with these parts feature predominantly male casts, with only one or two female roles total. As a result, women are not given the opportunity to see themselves on-screen being represented as anything other than someone's wife. If men must be the heroes of these Oscar-worthy films, then the least filmmakers can do is create fully-formed female characters to support them, instead of these flaky, one-dimensional wives.

And history shows us this is possible — there have been several good "wife" roles in recent prestigious movies. Two years ago in The Theory of Everything, Felicity Jones played Stephen Hawking's wife Jane, and was nominated for an Oscar for Best Actress in a Leading Role. Jones played a wife, but she wasn't relegated to the background — she was a lead. In 2011, Amy Adams was nominated for Best Supporting Actress for her role in The Fighter, that of the girlfriend to Mark Wahlberg's hero. Yet the character is given enough screen time and space to become a person separate from her relationship to the protagonist. She feels, to the audience, like she would exist with or without Wahlberg's hero. As these roles show, the problem with the "wife" trope isn't that the characters are wives, it's that they are only wives.

Sully is the first of what will be a long line of prestigious dramas hoping to get the Academy's attention in the winter. Soon there will be Snowden, Billy Lynn's Long Halftime Walk, Birth of a Nation and more joining in the Oscar race, but for now there is only Sully. It's disheartening to see the Oscar season begin with a movie lacking so obviously in complex female roles. But, with films like Loving, which tells the story of the interracial couple who made anti-miscegenation laws illegal in the US, on the horizon, and with the growing call for more gender equality in Hollywood, I have hope that better things are to come — for the sake of audiences and actors like Linney alike.