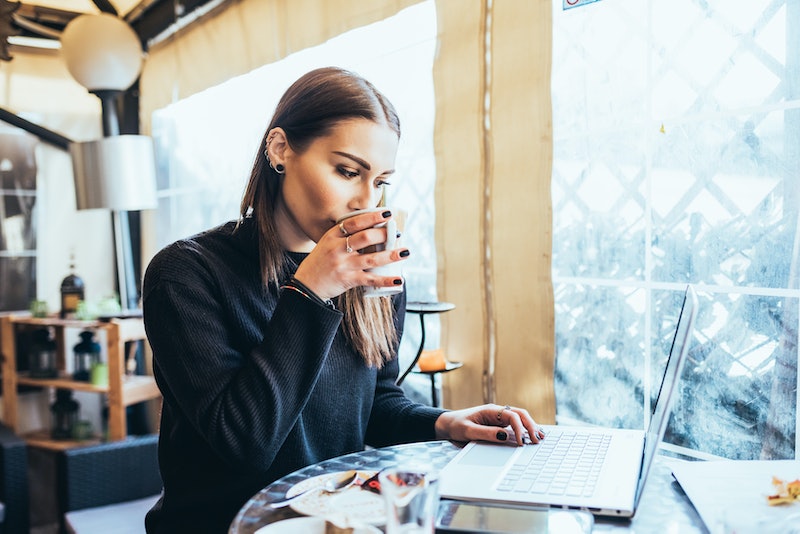 When you're a young adult trying to juggle a budding career, a social life, paying the bills, staying healthy, and more, it can be easy to let your dating life fall by the wayside. Who has time to go on probably-doomed first dates when there's Netflix to watch in what little free time you have? Although it may seem impossible at times, it's totally within your grasp to have a successful work-life balance — including a romantic life, too. Workaholics aren't doomed to a life of loneliness just because their office is their second home; they may just need to change how they view dating.

Because of the time commitment and costs of a date, it can be easy to think of dating as a chore that you have to do as part of a productive week. Being single and working long hours can potentially cause a lot of problems that discourage you from dating: grogginess after work, a super rigid schedule, or even a low libido if you're too stressed out. It might seem daunting to try to squeeze some semblance of a love life into an already packed schedule, but if you think of dating as just another way to expand your network — either social or professional — it can help you justify spending a few hours with someone cute from your favorite dating app. That's not to say you should give your elevator pitch to your dates, but having a casual drink with someone new is good practice for lots of stuff: interviews, public speaking, or just socializing in general.

"[A workaholic is] someone who is confident and comfortable enough to admit that work is their number one priority right now," Amanda Bradford, CEO of The League, a dating app catered towards the well-educated and ambitious, tells Bustle. "However, workaholics are frustrating to many of those who have 'meeting the one' as their number one priority right now."

That doesn't mean workaholics aren't interested in looking for love. Bradford says over 75 percent of The League users claim to work 60 or more hours per week — much more than the standard 9-5 schedule — yet they still have the app and are actively searching for a partner. Similarly, the top three most active cities on Tinder are Los Angeles, New York, and Chicago, aka home to some of the most well-educated young professionals out there. There's nothing wrong with dedication to your job and career ambitions, but it can be unhealthy to let your work take over all other aspects of your life. You don't have to go on happy hour dates every day, but taking some "me-time" during the work week will restore a little balance to your hectic schedule.

If you're a single workaholic who wants to make finding love a priority, here are seven helpful tips from Laurie Davis Edwards, founder of eFlirt and author of Love @ First Click.

First and foremost, you should check in with yourself and think about what you want in terms of romance. "[Ask yourself], how much of a priority is [dating] for you?" Davis Edwards tells Bustle. "What are you looking for? Serious or not? That’s step number one: Get clear on what you’re looking for." There's no shame in wanting something a little less serious so you can keep work as your first priority, nor is there any reason why your job should keep you from finding something more committed.

2. Change How You Think About Dating

There's no denying that dating is something that takes up your time, but Davis Edwards says lots of people overestimate the amount of time that actually goes into dating. When you spend time on dating apps, it can feel a lot like work: You're staring at a screen and 'logging hours' like you would at your job, but it's important to separate those two mindsets. "You can’t approach dating as you approach work," she says. "Think of it as ‘effort’ instead of ‘work’ — every relationship should take effort, and it can be a good thing to put in effort and get something back."

3. Create Momentum In Your Dating Life

When you're just getting back into the swing of things with dating, it can be easy to go on a couple bad dates, then swear off dating for a long time. But if you want to make dating a priority, the most important thing you can do is create momentum, so you don't stop and start every few months. "When online daters don't see immediate return, they think they need to cut their losses," Davis Edwards says. The best way to make something stick is to incorporate it into your daily life, even in a small way. If you don't want to schedule bunches of dates a month, try something as easy as saying hi to a cute stranger at your favorite spot.

"It's the idea that you’re putting energy into creating new connections with people," Davis Edwards says. Whether or not these connections end in romance is besides the point — it's all about creating momentum.

"From a mindset perspective, you can get stuck in work mode," Davis Edwards says. To combat this, come up with your own pre-date routine, a small succession of things you always do before a date, that forces you to set aside a little time between work and a date.

For a date that's right after work, for example, here's a routine one of Davis Edwards' clients does: she takes a cab to the date, listens to her pre-date playlist, and puts on a specific shade of lipstick. It may sound small, but a routine like this is an easy way to train yourself to go into a date feeling neutral instead of nervous, overly excited, or stressed. Dates can often seem like a huge deal, and being neutral helps you release any expectations you have that might get in the way of you being your best self.

5. Recognize That Dating Is A Skill

Like anything else, it's possible to be 'good' and 'bad' at dating, as evidenced by some of the cringe-worthy messages people get online. "It's important to recognize that online dating and dating in general is a skill — if you haven't done it in a while, it takes a little effort to get comfortable and confident," Davis Edwards says. "There’s a learning curve to dating. If you haven’t dated in a while, the culture of dating and things that will work online have probably changed, so the same strategies might not be applicable anymore."

Seek out resources that can help you — other single friends, books, dating coaches — and learn ways to be more efficient when it comes to finding love.

Being a workaholic and a goal-setter go hand-in-hand, and there are ways to use that to your advantage. "Setting goals for your dating life is really important, especially for workaholics who are time-starved," Davis Edwards says. "There are things with dating that you can’t control. Will you get a date every Friday? Probably not. Will setting that goal make that more disheartening for you?"

Instead of setting goals like 'one date per week,' try something more in your control, like 'message 10 matches per week.' It puts the power in your hands, and you'll feel like you're making positive steps towards finding love.

Most importantly of all, don't just give up if you try dating and encounter some roadblocks. "It's not realistic to set goals for how long it might take you to be in a relationship," Davis Edwards says. "Most people have an idea of when they'll meet someone: There’s some number [you imagine], but you’re probably not going to reach it. It's really important to release that and have the experiences instead and feel."

On the plus side, dating a workaholic has serious advantages, so you'll find someone who wants to be with you — it just takes a little patience and effort.