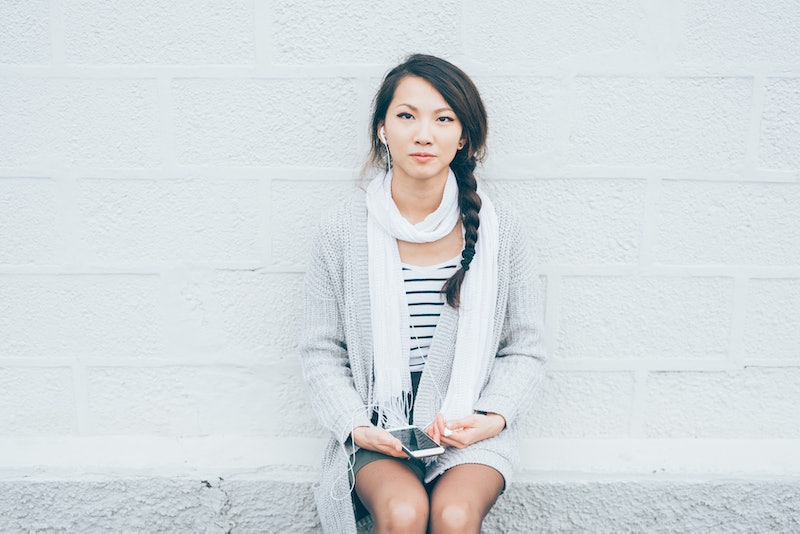 So you’re doing all the so-called ‘right things’ to find love: You’re on the dating apps. You are open and willing to talk to strangers and you don’t limit your possibilities with outlandish and unattainable deal-breakers. You make an effort to be open-minded and keep the conversation alive on dates. You’re checking all the right boxes, but at the end of the day — or after yet another date — you just feel damn discouraged. And defeated.

While you might not think you’ve given up on love — you are dating after all! — could it be that mentally, you’ve thrown in the towel? “When someone has had numerous bad experiences after another, they feel like it might be easier just to give up on love, and avoid the hurt it has caused them,” Psychologist Dr. Nikki Martinez tells Bustle. “They decide that if they avoid taking a chance on someone new, or being open to meeting someone, they also avoid being hurt.”

It might be scary, but the only way to truly find a lifelong partner, if that's what you're looking for, is to be brave — and vulnerable enough — to put yourself out there completely. Not just by actually hitting up the town and sipping some vino across the table from a new match, but by keeping your heart open, too. Here are some warning signs that you’ve mentally given up on love:

1. You’ve Convinced Yourself It’s Just Not Going to Work Out

No matter how many people reassure you, how many psychics you seek or positive mantras you try to remind yourself of, if the very thought of everything magically working out seems far-fetched, then you might be on the edge of giving up. “Mentally giving up on love is when someone decides that it is not worth the risk of feeling pain and possible rejection, so they avoid relationships altogether,” Martinez says.

2. You Shut Down When A Date Goes Wrong

Instead of having one round of drinks and letting the person know you’re just not feeling it, you beat yourself up over why you just can’t find anyone. Or you won’t let your friends set you up with anyone because you ‘just know’ how it’s going to end, Martinez says. If bad dates are no longer propelling you to go on another date to rid of the bad taste in your mouth, then you may be starting to mentally give up.

3. You Can’t Be Around Couples Without Feeling Jealous

As your friends start to settle down and settle into long-term relationships, cohabitation, and even marriage, you might find yourself drifting further and further away from them. Intentional or not, if you’re upset about being single and feel like it’s your death sentence, being around folks in love might just be too much to stomach.

Martinez says a sign that you’ve given up on love is that you start to avoid any situation that is purely couples and will only hang out with your single pals.

The biggest indicator that you’re done AF? You're looking for love but don’t want to go on dates anymore. Instead, you'd rather spend your time alone, in your apartment or with like-minded friends who are in similar situations and life stages, and you wallow together.

While you might feel comfort knowing you’re not the only single woman to experience these feelings while on the search for love (because you're certainly not), it may be time to make some changes. Martinez says that when you refuse to put yourself out there — at all — it may be time to either seek professional help or find a way to build up your optimism again.