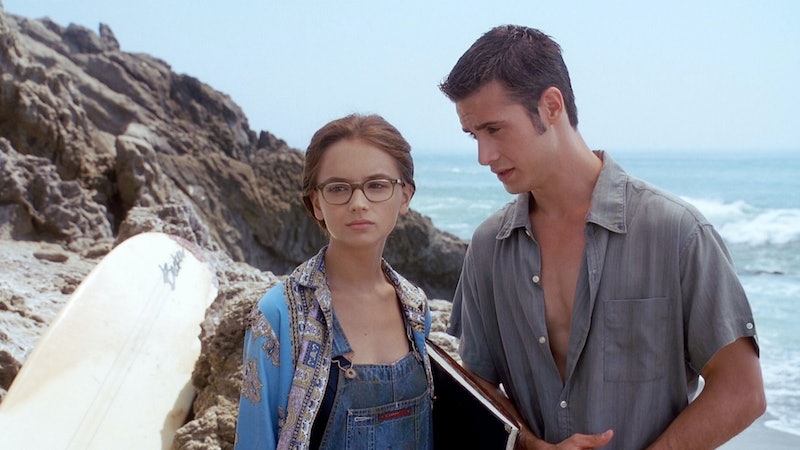 Drop your hacky sacks and please turn your attention toward a magnificent, recent occurrence, because your favorite fictional '90s romance had an off-screen coffee rendezvous nearly 20 years later. That's right: I'm talking about Laney Boggs and Zack Siler, leads of the 1999 classic, She's All That. Freddie Prinze Jr. and Rachael Leigh Cook got coffee together, because, as Prinze Jr. tweeted on Thursday, "When the homie‪ @RachaelLCook wants to have coffee, you get some damn coffee!" His words, not mine — though I do agree. And hey, it makes sense: you better believe that these old homies have a lot to catch up on.

In its simplest terms, She's All That was a love story. After a volatile break up, Zack Siler (Prinze Jr.) places a bet with the bro-tastic Dean Sampson (Paul Walker), because let's be real, what good rom com doesn't start with a bet? Zack has six weeks to turn any female person of Dean's choice into prom queen, so naturally, Dean chooses Laney Boggs — who he thinks is a major nerd but actually she's cool AF, wears glasses, is a legitimately talented artist, and seems like a nice person. The Pygmalion plot thickens when — spoiler alert — when they both fall for each other after she takes off her glasses and Zach realizes he's an idiot.

So, what do we think these two talked about besides that incredible, unforgettable saga? For Prinze Jr. and Cook, I have no clue. Judging by her response on Twitter, I guess, something about brownies.

Of course, if this were Zack and Laney meeting up after 20 years (I mean, you really don't think they actually stayed together during college, right?), well, that's a different story and I definitely have some ideas for that.

Probably one of these things:

What Happened To Brock Hudson

Brock Hudson: Real World superstar and really, really good at break dancing. Where is he now? Single, I hope? Kidding. I hope he procreated.

It's not really something you get over, y'know?

How Much They Hate Pizza Now

If Zack Still Never Backs Out On Bets

High school Zack would never back out on a bet, even if it involved graduating naked. Is adult Zach over that weird thing now?

How Much They Love Sixpence None The Richer

Or can't stand, I guess. ould go either way.

Including how gravity works.

Why It Took Zack So Long To Pick A College

It was May and he hadn't made a decision. What kind of college is OK with that?

They really just don't change your face that much. Also, Laney's high school glasses are really "in" right now.

What "Wiggin'" And "Wiggage" Mean

In reference to this enigmatic dialogue exchange:

Zach: "There was major wiggage."

I still have no idea what any of it means, and I have a feeling no '90s kid did either.

Whether Or Not They Should Have A Dance Off Right Now, The Funk Soul Brother

It's never not a good time for a dance off.

Or Maybe They Just Shouted "Be Silent, Be Still" At Each Other

And didn't say anything else.

Personally, I hope they finally discussed starting "some sort of dork outreach program," but that's just me.