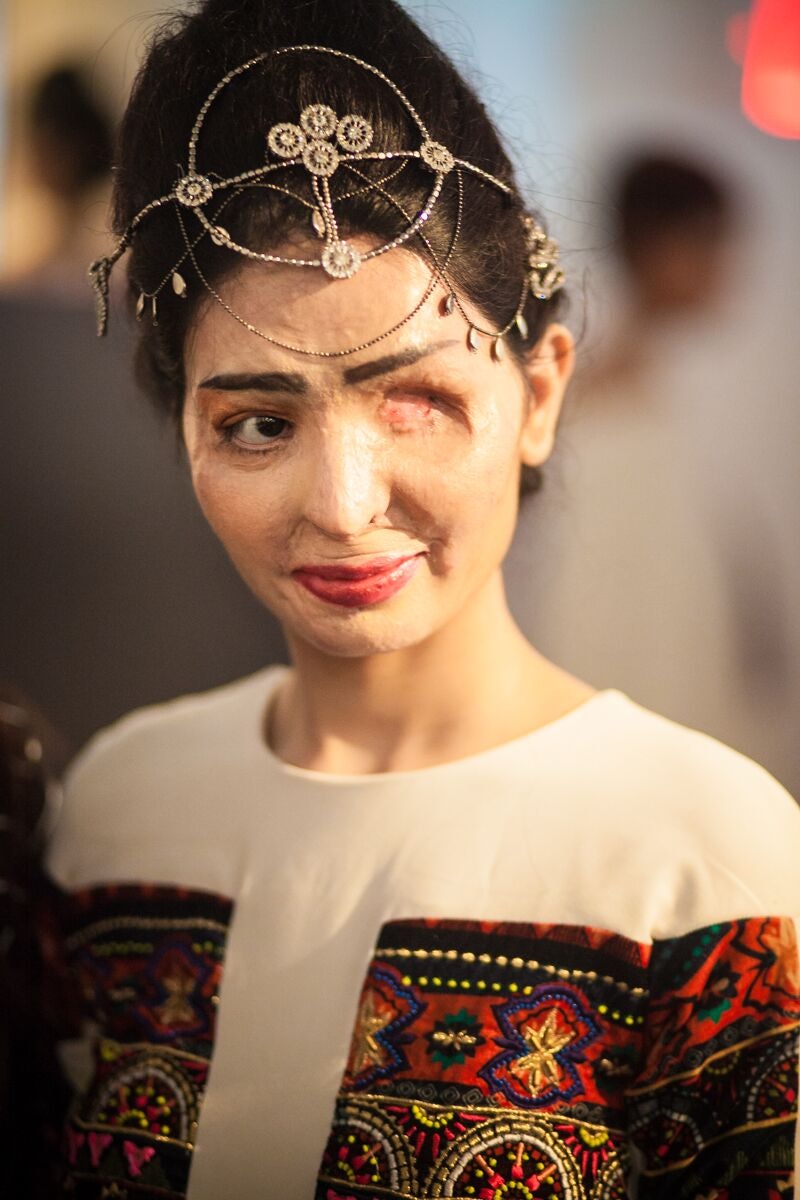 Fashion is often accused of being frivolous, frequently deservedly. But a show at this year's New York Fashion Week has just broken new boundaries by featuring Indian model and activist Reshma Quereshi, who survived a devastating acid attack by a male relative in 2015. Quereshi's catwalk stomp is neither out of the blue nor out of character, though. She has already made worldwide headlines for her beauty tutorials with the charity Make Love Not Scars, and is one of the world's most famous acid attack survivors. Her walk in the Archana Kochar show Thursday, the first by an acid attack survivor at NYFW, represents not only a movement forward in the concept of "beautiful," but a crucial moment in the fight against gender violence in India and across the world.

Acid attacks are heinously common in various parts of the world, frequently targeting women who are perceived to have violated a family's "honor" or who've disobeyed a man's wishes. After 2014, the Acid Survivors Foundation India explains, the mechanism for reporting acid attacks in India became more concrete, and there was an immediate spike in reports: 349 in one year — and that's likely to be an underestimation. "Most victims are fearful to report it to the police for fear of reprisal," an expert told BBC news, estimating the true number of Indian cases per year as closer to 1,000. Acid attacks are a problem in Bangladesh, Iran, Colombia, and parts of Africa as well; in Britain, a 2016 study found that reports were up 30 percent. It's not a minor injury, either. Tanushree Ghosh, writing for the Huffington Post, laid out a brutal summary of the costs of acid attacks in 2016: "complete debilitation, loss of income and opportunity, and even social sequestration."

In the face of such depressing statistics, Quereshi's fortitude is impressive, particularly considering that she's still only 19. Her road to New York, as a representative of the #TakeBeautyBack campaign mounted by Global Disability Inclusion, has been an extremely painful one involving multiple surgeries, but her own perspective on her fashion debut was one of happiness and political awareness.

"I feel really good to be at NYFW and to be walking the ramp," she told photographer Lela Edgar, "just because I will be representing so many acid attack survivors back home, and I want to be able to show people that even if I can walk in such a condition then they should look at everyone in the same light as ordinary models."

Quereshi's visibility matters, not only to the worldwide community but to her own country. In a report on acid attacks against women in 2012, the BBC reported that fewer than 10 percent of victims in India are able to take their persecutors to court, and the conviction rate is even lower. The problem, it seems, is a societal one: Both the legal system and the wider community shun survivors, a divide so stark it's driven several groups of survivors across India and Pakistan to found cafes as "safe spaces" for other acid-disfigured women to socialize.

But the momentum may slowly be shifting. This week, alongside Quereshi's walk, marked another landmark moment for acid attack survivors: A court in Mumbai has sentenced a man to death for the murder of a woman he had attacked with acid in a train station in 2013. The BBC reported that the man in question was motivated to kill the woman, Preeti Rathi, after she rejected a marriage proposal.

Quereshi's work with Make Love Not Scars is targeted at a particular issue: the easy availability of acid for would-be perpetrators across India. Despite legal banning, it's still very easy to pick up acid in local shops — but Quereshi is hopeful that will change.

"The Supreme Court of India already banned and regulated the sale of acid in 2013," she told Edgar, "so all we need is implementation at this point of time, and I do think that it’s possible in the future; I have been campaigning for the last year." If we soon see a legal tipping point in acid sales in India, and a shift in local attitudes towards targets of this hugely gendered violence, Quereshi's face will be fronting the campaign, a (very beautiful) vision of change.

The show itself was well-reviewed, but even though Quereshi wasn't the only celebrity on the catwalk (Bollywood star Sunny Leone was also a model), she was the one who captured worldwide headlines. Watch this space: model-slash-activist has a good ring to it.

More like this
25 Inspiring Quotes From Black Women To Celebrate Black History Month
By Kyli Rodriguez-Cayro and JR Thorpe
The Best Beauty Looks Spotted At Paris Couture Week 2023
By Audrey Noble
The Biggest Fashion Moments Of Paris Couture Week 2023
By Dominique Norman
Twitter Memed Doja Cat's Red Schiaparelli Look & I Am Cackling
By Dominique Norman and Kelsey Stiegman
Get Even More From Bustle — Sign Up For The Newsletter
From hair trends to relationship advice, our daily newsletter has everything you need to sound like a person who’s on TikTok, even if you aren’t.