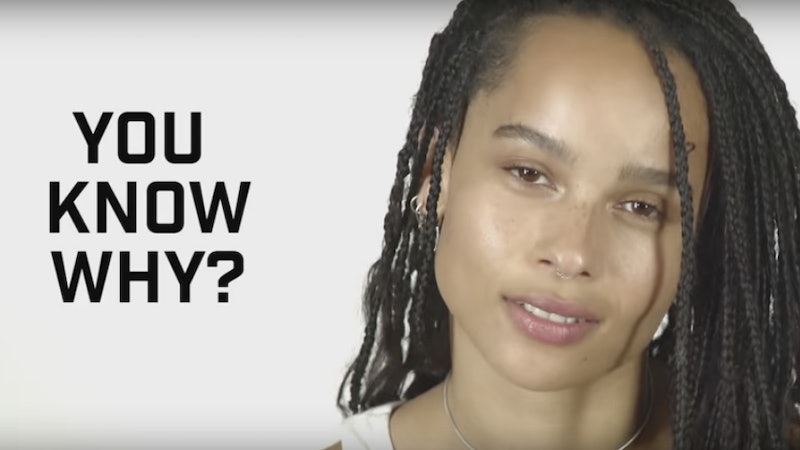 If you're wondering what you could have in common with Zoë Kravitz, it could be joining the pledge to stop Trump. In a new video released on Friday from the "Women Can Stop Trump" campaign started by EMILY's List, celebrities Kravitz, Amber Tamblyn, Diane Guerrero, Erika Alexander, Maura Tierney, and Kate Greer encourage women to get to the polls on Nov. 8 to ensure that, with women's votes, there's no way Donald Trump will get into the White House. The celebs in the video go over just some of the Republican nominee's dangerous, misogynist platform promises, like overturning Roe v. Wade and defunding Planned Parenthood. Then there's his belittling and sexist name-calling, including calling women "dog," "fat pig," and "bimbo." And his belief that women who are sexually harassed in the workplace should just find another career. Not to mention the fact that he's said time and again that he would date his own daughter, if she weren't his daughter. The heart of the video's message, as put by Tamblyn: "As usual, women, roll up your sleeves."

The campaign's website encourages women to sign the pledge to stop Trump, and shares this powerful statistic:

In 2012, women made up 53 percent of the electorate. Seven in 10 women disapprove of Donald Trump. If women turn out to vote like they did in 2012, they can do what Marco Rubio, Jeb Bush, and Ted Cruz couldn’t. Women can — and will — stop Trump.

Sick burn to the other Republican candidates, and an empowering message about the strength in numbers. The website also shares just about every degrading, demeaning, and medieval thing Trump has said about women, and there are so many. Just this week he defended a 2013 tweet he wrote that said, "26,000 unreported sexual assults [sic] in the military-only 238 convictions. What did these geniuses expect when they put men & women together?" As Alexander says in the video, that's not someone who should have the nuclear codes.

More like this
Adele’s All-Female Lineup Includes Kacey Musgraves, Mahalia, & Self Esteem
By Shahed Ezaydi
Here’s How Lizzo Is Supporting Abortion Rights After The Roe v. Wade Reversal
By Brad Witter
Michelle Obama & Taylor Swift React To The Supreme Court Overturning Roe v. Wade
By K.W. Colyard
'The Undeclared War' Took Inspiration From This Gavin & Stacey Location
By Maxine Harrison
Get Even More From Bustle — Sign Up For The Newsletter