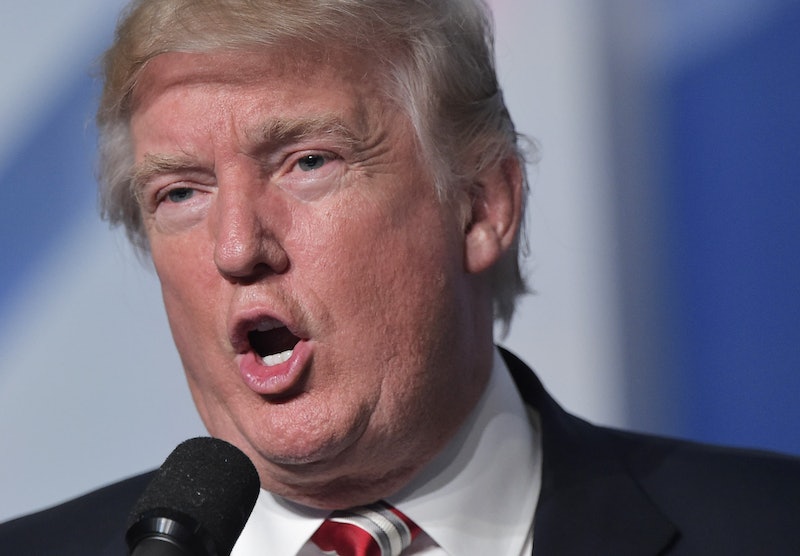 Donald Trump's detractors have long accused him of being a bit too cozy with Russian President Vladimir Putin, and Trump just added a bit more fuel to that fire. On Thursday, the Republican presidential nominee gave an interview that aired on the Russian government's state-run media outlet, and proceeded to criticize President Obama's handling of the Iraq war. Given that state-run media essentially functions as the propaganda wing in authoritarian dictatorships like Russia, Trump's bashing of Obama on Russian TV was perhaps not the most patriotic thing for him, a candidate for the U.S. presidency, to do.

Team Trump quickly went into damage control after the interview aired Friday, arguing that Trump and the campaign didn't know it was going to air on RT America. Campaign spokesman Jason Miller said that Trump recorded the segment as a favor to Larry King, who conducted the interview, and that "Mr. Trump was never told" it was going to air on Russian TV. In 2013, Trump did an interview on the same program, and it also aired on RT.

In the Thursday interview, Trump said that the Iraq war, which he supported in 2002, was a mistake. At the same time, he criticized the manner in which Obama withdrew U.S. forces from the country.

“It's a war we shouldn't have been in, number one,” Trump said, “and it's a war that when we got out, we got out the wrong way. That's Obama.”

Trump's appearance on Russian TV raised eyebrows in part due to his long history of complimentary and flattering statements about Putin. During a candidate's forum on Wednesday, Trump heaped praise upon the Russian dictator, calling him "far more" of a leader than Obama.

In August, former CIA Director Michael Morell suggested that Putin has intentionally played on Trump's desire to be liked in order to advance Russian interests.

If this is indeed Putin's plan, it's already paid off: At the Republican National Convention, the Trump campaign worked successfully to remove anti-Russian language from the official GOP platform. That same month, U.S. intelligence agencies told the White House that they believed state-backed hackers in Russia stole and leaked documents from the Democratic National Committee, perhaps in an attempt to boost Trump's chances of winning the election.

Trump's appearance on Russian TV was concerning no matter how you interpret it. If he truly didn't know the interview was going to air on RT, that's an indictment of his general awareness and competency — candidates for the presidency need to be capable of avoiding accidental interviews with foreign state-run media outlets. Furthermore, it's uncouth for a presidential candidate to compare the sitting commander in chief unfavorably to another country's leader. And when they make that comparison on the other country's government-run TV station, it comes off as unprofessional at best and unpatriotic at worst. This was not a good way for Trump to end the week.