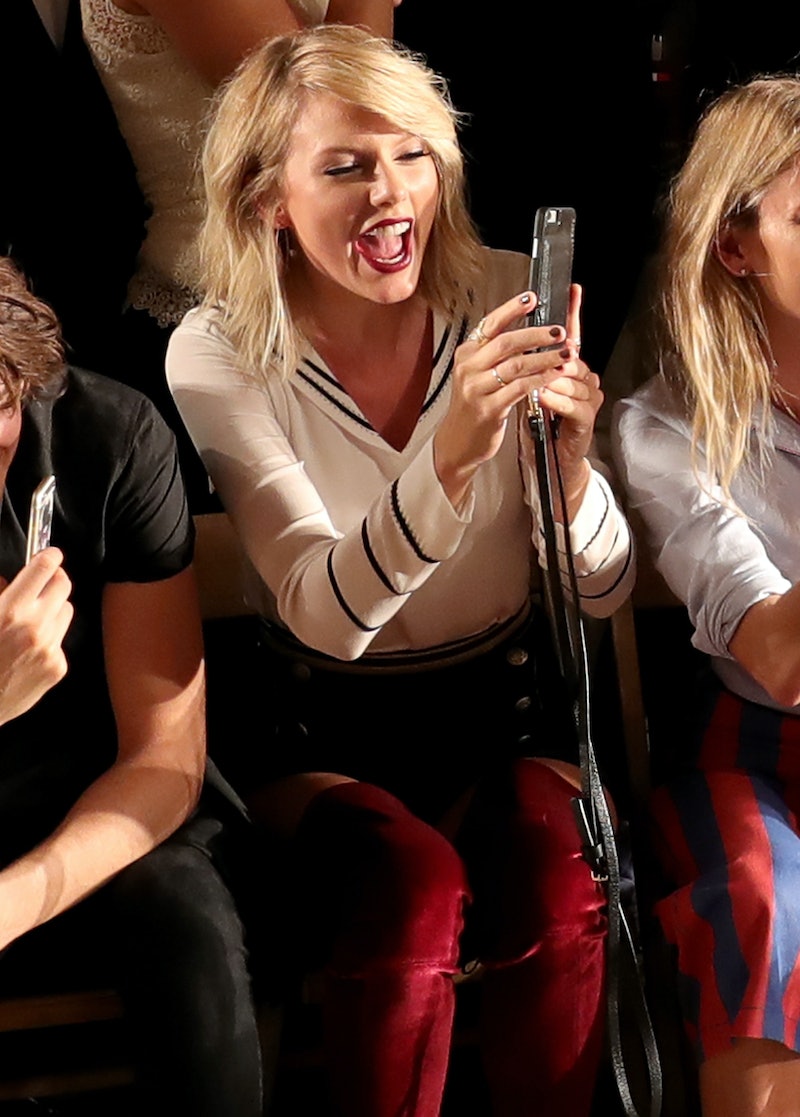 Can you imagine living with the sheer amount of fame that Taylor Swift does? It's literally unimaginable: Swift goes to a New York Fashion Week show, and happens to be best friends with the supermodels. She chills in the front row, and the song the models sashay down the catwalk to is one she's written. If that's not a bona fide success story, I really don't know what is. Hilariously, this is pretty much exactly what took place on Friday Sept. 9, when Swift attended a show with model Martha Hunt to cheer on BFF Gigi Hadid who was slaying the runway as she always does. Of course, being that they're millennials, Swift was Instagramming her adventures as they happened — and even filmed a short video of her and Hunt singing along to Calvin Harris and Rihanna's "This Is What You Came For." I know it doesn't seem like a big deal, but trust me: It is, and this is profoundly cool of her.

If you don't remember the drama that surrounded the song and Swift, here's a quick primer: In short (or as short as I can make it), when the Rihanna single was released, Swift's ex Calvin Harris and the mysterious Nils Sjöberg were listed as its writers. However, Nils Sjöberg turned out to be a pseudonym for Taylor Swift — and not only that, but she'd contributed background vocals to the song as well. Though the duo had reportedly agreed that Swift would not be credited under her own name because their collaboration on the song could overshadow the song itself, Harris said during an interview with Ryan Seacrest that he couldn't see a collaboration between him and Swift happening — which, according to TMZ, Swift felt disrespected by. The gossip site later reported in July 2016, shortly after Harris' breakup with Swift, that Swift was, in fact, Sjöberg.

Now, it seems like any sour memories associated with the song have left the building, because Swift seems to be having a riot of a time serenading her supermodels with the summer dance anthem. Since this marks the first time we've seen Swift have any sort of public reaction to her catchy summer hit, it's kind of a big deal. And good for Swift: why not celebrate the song rather than ignore it? It's a genuinely fun track that was stuck in my head for weeks, and she should be proud of herself for writing it, even if its release wasn't ideal. If I'd written it, believe me, I'd be telling the world about it, too. So all hail Swift: queen of hits and friendship.

More like this
Taylor Swift Fans Caught A Possible ‘1989’ Clue In Her Latest Awards Show Speech
By Grace Wehniainen
Sadie Sink Would Escape Vecna From 'Stranger Things' With This Taylor Swift Song
By Grace Wehniainen
Taylor Swift's “Carolina” Theme For 'Where The Crawdads Sing' Soundtrack Is Here
By Jake Viswanath
Michelle Obama & Taylor Swift React To The Supreme Court Overturning Roe v. Wade
By K.W. Colyard
Get Even More From Bustle — Sign Up For The Newsletter