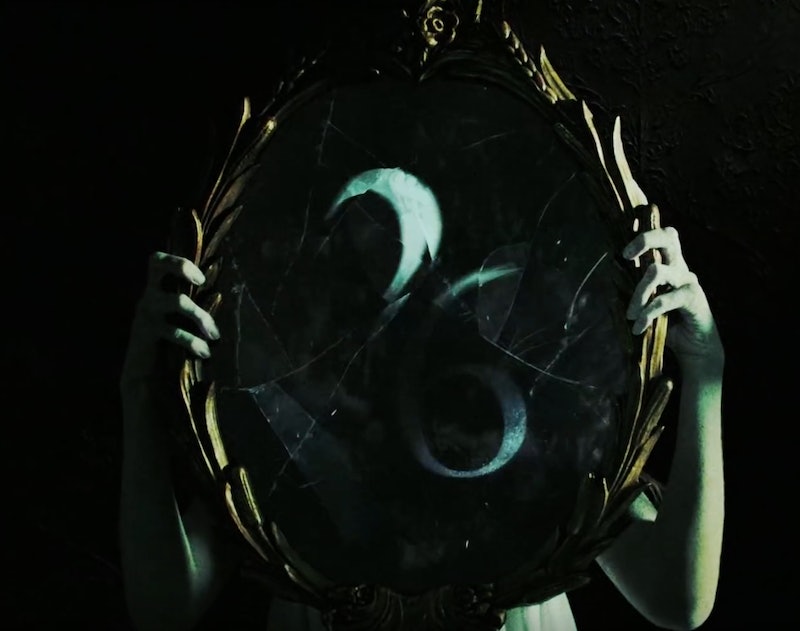 You guys, I can't handle the rollercoaster of emotions that the various American Horror Story Season 6 teasers continuously bring. Can you? There's been such a deluge, each more different that the last — how are we supposed to keep up? Why can't they all just loosely surround one theme? Luckily, after months of attempting to eke out a theme from the quick snippets of promo footage, the wild ride will soon be over: As the season premiere quickly approaches, we're that much closer to finally — finally — finding out what all the fuss is about. Mark my words, Wednesday, Sept. 14 will be a day of vindication for us all. But, just when we all thought is was safe to completely relax and just wait for the premiere, a newly released promo titled "Illusion" is leading us to believe AHS 's Season 6 theme is nowhere near what's been previously suggested.

While it's been the modus operandi for Ryan Murphy and co. to keep fans guessing, the slew of promotional teasers and photos coming out about AHS these last few months has left everyone's heads spinning. And now, this "Illusion" promo seems to be the crown jewel of the entire promotional campaign. It's a quick mash-up of each of the previous promos, scored with Lady Gaga's latest hit single, "Perfect Illusion." The meaning becomes very clear by the end thanks to the lyrics of the track: What we've been poring over these last few months has all been smoke (or perhaps mist, as has been rumored?) and mirrors. I'm definitely reading into this — because why not — and am choosing to say that we've been fed nothing but lies. The theme is still out there, lying in wait. It's kind of the perfect troll, if you think about it: Release a promo a few days before the season premiere, feature a brand new song from one of the show's biggest names, and watch the world go into a frenzy. What are you doing to us, Murphy?

To a certain extent, we knew this would be the case. The only two solid leads AHS fans have had to go on is that the show would involve children in some way, and that irrelevant promos have been created to throw fans off the scent. Despite the meta-troll that is the "Illusion" teaser, it did still include the promos with children; I'm willing to bet it all that those are the promos to pay attention to and expect to emerge as the dominant theme of the season.

Don't believe me? Let's ponder this. Each of the promos involving children takes place in either a house, a field or cornfield. Those could ostensibly all be one location. In two of them, the children are just completely creepy: a group sits at desks in the cornfield, waiting; in another, a child is joined by two adults and they all have glowing eyes. In the third promo, a very sinister mobile hangs above a crib. To add even more fuel to the fire, one of the latest images from the AHS Twitter is this one:

It's that creepy crib again, but now, it seems to be surrounded by, yes, you guessed it: mist. If we're also to keep any fingers crossed in hope that this year's title would be American Horror Story: The Mist , then this image seems to solidify that idea too. Will there be children coming out of the mist and raising a ruckus? Will there be a mist that suddenly gets a taste for human flesh and tries to consume all the children in a small Midwestern farming community? I mean, literally anything is possible when it comes to AHS . This time would be no exception.