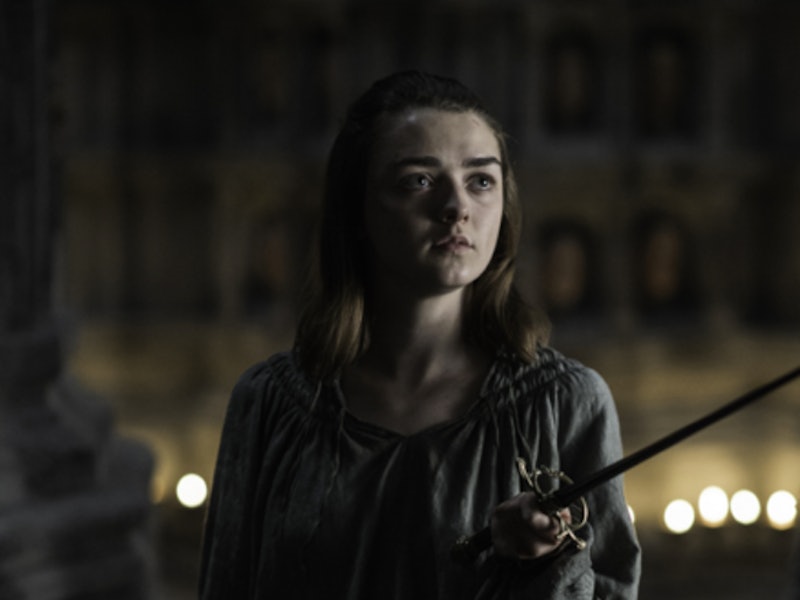 The end of Season 6 found Arya serving Walder Frey a special pie before slitting the old man's throat for his part in the Red Wedding. In that moment, as far as I'm concerned, it became clear Arya is Game of Thrones ' Lady Stoneheart. No, she never died like Lady Catelyn did in the books, but that only makes her scarier: Arya is acting under her own volition. She decided to forsake the code of the Faceless Men and use the training she gained in the House of Black and White to punish all those who harmed her family.

It is a brilliant, unexpected move for the show to make. It also happens to be one that adds a new layer of complexity to the character of Lady Stoneheart. If Arya is assuming the role, then in the world of Game of Thrones, Lady Stoneheart is a young woman who has never died, but who has appointed herself the God of Death.

Over the seasons, Arya has become progressively darker. Although she is still a child, she is a child who kills without remorse: Revenge motivates Arya more than anything else. Now that she has given up on ever becoming an assassin with a code, she is free to pursue her list of names.

While Arya could work alone, her desire to be part of a pack may be stronger than her need to cross off all the names on her list immediately. The Riverlands have become a place of chaos after the war, and with winter coming, Arya could remember her father's word: "The pack survives." The Brotherhood Without Banners needs leadership and Arya is both mature enough and deadly enough to force them to focus their energy. Now that The Hound is part of their group, Arya has even more of a reason to throw her lot in with them.

Having Arya slide into the role of Lady Stoneheart is not an exact substitution for the character, but in many ways it adds more pathos to the idea. She's still very much among the living, but she dwells in a place of death. She is a killer now, and without her family, she has hardened to the point where she is in danger of completely losing her humanity. Her heart is turning to stone even as she still lives and breathes.

The Brotherhood and The Hound could be Arya's only chance at finding a place for mercy in her heart. Right now, she is the woman haunting the Riverlands, passing judgment on all those who cross her path. Like Lady Stoneheart, Arya's only goal in life is to make everyone who harmed her family pay. The only difference between the two characters is Lady Stoneheart cannot be saved from herself, but there is still hope for Arya.

If Game of Thrones has truly found their Lady Stoneheart in Arya, Season 7 is going to be a bloody, heartbreaking season of television. Arya will be at a crossroads and whether she chooses vengeance over rejoining her family will be the ultimate deciding factor in her fate. If she chooses the former, then Arya's role as the Lady Stoneheart of the Game of Thrones' universe will be solidified.