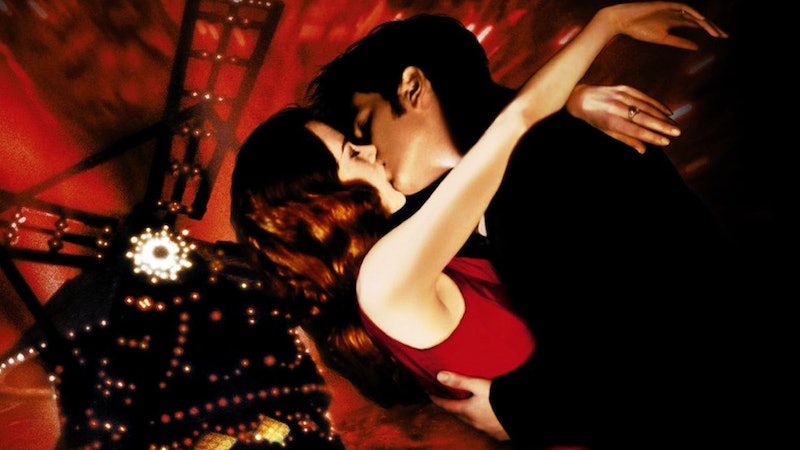 Starting college can be a stressful time. It's not just the beginning of the experience that can be a bit panic-inducing, but the whole first year. It's all a major time of adjustment, a transition to adult life, and for many people, getting through it unscathed requires having something to cling to during the tough times. For me, that thing was the movie Moulin Rouge! Baz Luhrmann's musical extravaganza helped get me through my freshman year of college and reminded me why I was there in the first place, and with the recent announcement that the movie is going to be made into a stage production, I can't help but look back and remember why the film was so important to me that year.

As many might remember, The 2001-made, highly-stylized musical takes place in 1900 Paris in the seedy Montmartre section of the city, where brothels, courtesans, and can-can dancers do anything and everything to take money from wealthy men who venture to the neighborhood. The story centers on Christian (Ewan McGregor) a young writer who falls desperately in love with Satine (Nicole Kidman) a star courtesan. The two begin a forbidden love affair, complete with gorgeous costumes, exaggerated characters, and epic musical numbers. One of the coolest things about Moulin Rouge! was that much of its music was pre-existing; in addition to a few new tunes, the film incorporated music by artists like David Bowie, Madonna, Elton John, The Police, Queen, Marilyn Monroe, and Nirvana. It was a musical mashup of pop culture hits, and for my freshman year theater nerd self, it was perfection.

During that time, my life and interests were devoted to theater, musical theater, and anything performance related. Whenever my awful roommates made fun of my interests (they were jocks who didn't seem to appreciate the arts at all), or whenever classes were getting tough, or whenever I was just lonely and homesick, I'd press play on my Moulin Rouge! DVD and revisit Paris in 1900. The film incorporated so much of the theater world I loved, from the costumes, to the dancing, to the singing, to the set pieces, making the whole thing a stunning piece of art. Anytime I was overwhelmed by "college stuff" like homework or core classes that had nothing to do with theater, Moulin Rouge! would connect me back to the creative side of things. Watching a movie was easier, and more affordable, than seeing a lot of theater while I was in school, but it proved to be just as effective.

Even though the movie is a total fantasy, watching it reminded me of the reality of why I was at college. While there, I wanted to learn more about staging, acting, and design, anything that had to do with presenting a performance art. The film is a natural fit for anyone interested in this field, and viewing Moulin Rouge! repeatedly over the course of that year grounded me in the work and helped me keep my attention on the types of things that I could eventually do if I got better and better at them. These days, my focus is writing, another of the film's highlighted artistic pursuits, and the characters' devotion to storytelling and words still resonate with me today.

With tons of students just starting out college this September, things are bound to get stressful for them. Perhaps they, too, will find it helpful to return to a piece of pop culture that reminds them of why they was going to college to begin with. Take it from me: be it a book, a movie, a TV show, or a work of art, finding something that you can turn to when overwhelmed or questioning your presence at college — or anywhere new and stress-filled, really — is an effective way to face the tough times and get the surge of encouragement you need.