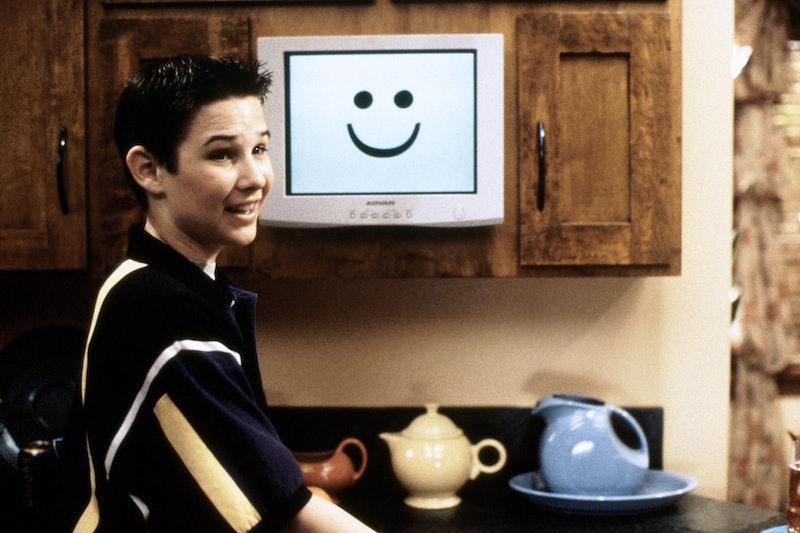 Technology may be advancing at an alarming rate (um, no more headphone jacks on our iPhones?!?) but if there's one thing I'm a little bummed about, it's that our homes haven't advanced to the point of Pat from Disney Channel's 1999 original movie Smart House . Pat — AKA personal applied technology — was able to automatically clean up parties, cook gourmet meals with the touch of a button, and turn your room into a dance party for one. Sure, Pat eventually becomes a sentient computer who demanded that her residents behave like a 1999 version of Leave It To Beaver, but just because this house had a few bugs doesn't mean I would have skipped out on having my very own Pat. Or would I? Given that I hadn't actually seen Smart House in nearly a decade, a re-watch — and reality check — was certainly in order.

1. Pat Is Basically The Terminator

Pat isn't exactly into global domination, but she does sass the newspaper boy by criticizing his aim, then using her terrifying claw arm to scoop up the paper. Terminator came out in 1984, so why Pat's neighbors didn't immediately think "SkyNet" and attempt to destroy the house is a total mystery.

2. It's Fortunate This Glasses Trend Has Died

His name is Butler. Rat Butler. Get the Gone With The Wind reference? Because I totally didn't when I was a kid.

Ryan Merriman may be the kid we all know and love from The Luck Of The Irish, but lately all I can think of him as is the dude who tried to murder Spencer on Pretty Little Liars.

8,411 people entered to win the smart house, which, according to the owner, was actually a really good turnout. Considering that Ben was probably half of those responses, that's completely and utterly insane. The contest was free to enter, and the ultimate prize was winning your own home. More people than that enter contests when the prize is a box set of DVDs.

6. No One Is Impressed At The Right Things In This Movie

Pat is so technologically advanced that she can prepare a smoothie in less than 30 seconds at the sound of a vocal command. She has a giant claw that comes out of the house to fetch the newspaper. And yet the thing that gets the biggest reaction is Pat being able to randomly select the winner of the contest.

7. Smart Houses Existed In This Universe But Cellphones Did Not

You would think that technology would have at least advanced far enough to give everyone a cell phone in their pocket in this alternate universe.

8. Pat Has More Information Than The NSA

As smart house creator Sarah explains, Pat takes a sample of her residents DNA, analyzes it, and then creates a breakdown of their medical history in order to "get to know" the people living in her house. Seems crazy invasive, but everyone is all smiles about it.

9. I Don't Know If I Would Trust Lobster Cooked By A House

The beach setting is cool, but where did the lobster come from?!? Is there a tank underground where she keeps them just in case the family wants to pretend they're in Maine? So many questions.

10. Ben's Plan Is Seriously Messed Up

Ben's idea on how to get his dad to stop hitting on Pat's creator? Start turning Pat into Mrs. Cleaver so their dad won't look for a new mom in Sarah. The plan is seriously short-sighted, especially considering Ben's dad isn't just looking for a mom to his kids — he's looking for a wife. And Ben just set him up with a computer.

11. This Scene Is Still Everything

12. I Totally Ship Sarah And Nick

I mean, look at the way Nick looks at Sarah, who is basically all of our badass STEM heroine. How dare Ben decide she is unworthy of his father's love? She's adorkable (I mean, she has a pet rat, for God's sake) and seriously smart.

13. Pat Tried Way Too Hard To Be The Cool Mom/Computer

You know the moms who think that they need to try so hard to be fun in order for their kids to like them? Pat throws Ben a party against his dad's wishes in order to seem like the cool, chill, likable personal applied technology she is.

Gone are the days of the '80s jock bully. In the late '90s, it was all about dudes in shell necklaces who wore entirely too much hair gel.

15. Pat Would Totally Get This Family Sued

Pat literally electrocutes Ben's schoolyard bully. In 2016, this would totally win this guy half a million dollars.

16. There Is Zero Chemistry Between Ben And His Crush

She's totally just using you for your smart house, bro.

17. There's Some Seriously Sad Stuff In This Movie

Ben's arc is surprisingly deep. He's so devastated from the loss of his mother that he refuses to let his dad date anyone for fear that the dad will forget his mom ever happened. Their confrontation — in which the dad reminds Ben that Ben isn't the only one suffering — is surprisingly deep for a movie about a talking house.

Oh, you thought Gemma could be scary? Did she ever electrocute someone to defend your honor? Did she ever create a tornado in your house because you told her she wasn't actually human? Pat could take down Gemma any day and wouldn't even need a motorcycle gang to come in for the assist.

19. Pat Plans To Keep Them In The House Forever. Forever.

She straight-up starts playing war footage and tells the fam that they are no longer allowed to leave the house, which is sort of like what happened in 10 Cloverfield Lane. The implications are disturbing, to say the least.

She turns pretty monstrous when she's told she's "out of control," though to be fair, no one likes being told to calm down.

21. Even After Everything, They Still Don't Move

Sure, you got this house for free, and it almost killed you, but sure, stay here. Please.

As Nick muses, "She serves without trying to interfere! What more could you ask for?!" I don't know, maybe hiring a living, breathing human being who can't go rogue and lock you in your own home for eternity? Hopefully the family learned once iRobot came out.

The house may be smart, but the people inside it? Not so much.