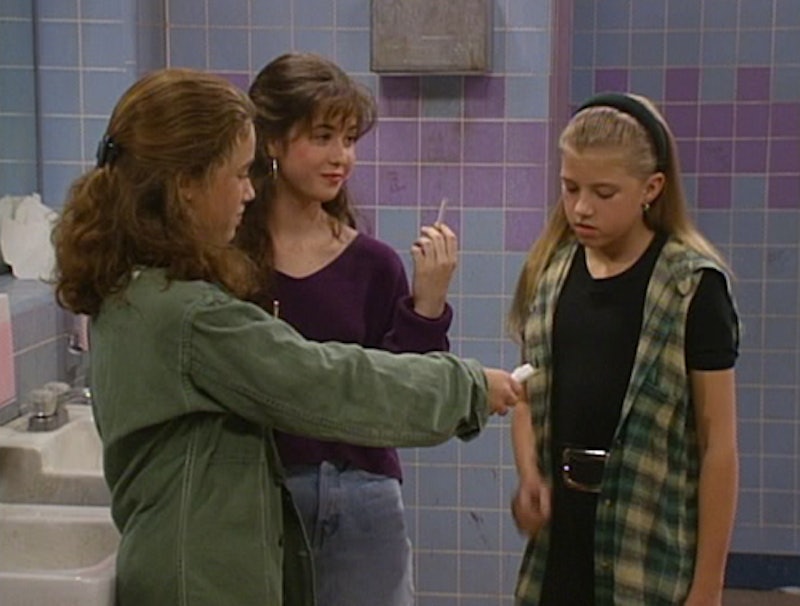 Growing up in the '90s often meant watching endless episodes of Full House. Watching the show meant watching D.J., Stephanie, and Michelle grow up and learn life's greatest lessons the hard way. Even if you have a sister, the Tanners probably felt like the sisters you always wanted. And even if your parents were perfectly capable of raising you, Danny, Jesse, and Joey were there to raise you, too. In each new episode, Full House taught us life lessons about everything from growing up to dating to making friends.

The wonderful thing about Full House is that it followed the lives of three sisters at totally different ages who grew up all together. This meant that we got episodes that helped us deal with our own situations, helped us understand our younger sibling's situations (if we had one), and even helped provide us with a look into what we could expect in our near futures. Everyone grows up at their own speed, but Full House covered it all. That's why the lessons learned from watching Full House are the lessons you'll keep with you forever.

Let's have a look at some of the best to make sure that we don't forget a single one.

All kids dream of how they would spend their time if they skipped school. But when D.J. Tanner decides to sneak off to the mall to meet her favorite celebrity, things don't go quite as planned. This episode teaches viewers to never lie or go behind anybody's back, because, in the end, you'll always have to face the consequences of your actions.

Growing up becomes way too real for Stephanie Tanner when she has to say goodbye to Mr. Bear in this Season 2 episode. If there's anything Stephanie's struggle can teach us, it's that there's nothing wrong with holding on to pieces of your past — as long as you don't let your past stop you from moving forward.

One lesson that the Tanner sisters needed to learn over and over again is that you don't need to change yourself for the approval of others. In Season 3's "Back To School Blues," D.J. learns this after trying to dress differently to impress the older girls at her new school. As a result, she learns — and we learn — that it's better to just be yourself.

Stop caring about what other people think. This lesson has to be one of the hardest to learn in life, but a young Stephanie Tanner was up for the challenge. In the Season 3 episode, "Nerd For A Day," Stephanie's new friendships go wrong when her friends make fun of her for "dating" one of the not-so-popular kids in school. Stephanie ends up standing up for herself — and for the boy everyone once called "duck face."

When Stephanie has her Honeybees slumber party, she learns that families come in all shapes and sizes, and teaches us to be grateful for our own. Even though her mom isn't there, Stephanie is thankful that she has her Uncle Jesse and her Uncle Joey. It just wouldn't be a full house without them.

Two wrongs certainly don't make a right. And, in Season 4's "A Pinch For A Pinch," Michelle Tanner teaches us that valuable lesson. After Uncle Jesse unexpectedly steers Michelle in the wrong direction, they learn that getting even isn't always the best way to stop a bully and violence is never the answer.

Body image can be a major struggle as we get older. When D.J. passes out after going on a rather unhealthy new diet in "Shape Up," she learns to love herself the way she is. And that's not the first time that message has come up. Full House was also sure to stress this in Episode 15 of Season 8, "My Left And Right Foot." When Michelle Tanner gets anxious about the size of her feet, she needs her family to let her know she's perfect as she is.

When you have big dreams, it can often feel like there's too much to do in too little time. But in the Season 4 episode, "Working Girl," D.J. learns a valuable lesson: don't overwork yourself. As if being an older sibling and student wasn't already enough, D.J. takes on a part-time job as well. Sure, she learns the values of responsibility, but other aspects of her life slip away from her. If only we all could learn the importance of time management at such a young age.

Looking back at this episode now, it's crazy to think that Full House was already so progressive in a topic that is only just now gaining the attention it deserves. "Girls Will Be Boys" broke down gender labels and brought the conversation to the forefront when a young Michelle struggled to fit in with her gender role amongst her male friends.

This has to be one of Full House's darkest episodes. When a class assignment brings Stephanie closer to a classmate she's not too fond of, she gets to know more about him on a more personal level. As it turns out, her classmate was dealing with abuse from his father at home. This episode taught viewers not to be afraid to speak up when something's wrong — even if that means breaking a promise.

Aside from making us believe in love all over again, "Prom Night" taught both D.J. and the viewers about the importance of communication. When a miscommunication has D.J. thinking it's all over for her and Steve, they find themselves having a serious talk about where they stand.

Being popular isn't all that important if it goes against what you believe in. Stephanie Tanner learned to be herself and ignore the requests of the "cool" kids in what has to be one of Full House 's most memorable episodes. While the TV show's characters are a little easier on Stephanie than more high school kids are, my teenage self knew, because of this episode, that I never needed to try anything I didn't want to, either.

"Making Out is Hard To Do" taught Stephanie and viewers the importance of saying "no." When Stephanie finds herself at a party with make-out sessions on the table, she learns that she doesn't always have to go with the flow. (This lesson is taught again in Season 8, Episode 9's episode, "Stephanie's Wild Ride," when Stephanie finds herself in a car with someone who isn't driving safely.)

As "Love On The Rocks" proves, relationships take hard work. When D.J. realizes that her relationship with Steve isn't as heavily "romantic" as it used to be, she contemplates whether it might actually be over for them. That is some serious relationship advice for an episode of Full House.

Full House should just be taught in schools. If there's one '90s show I have to share with my future kids, it might just be this one.