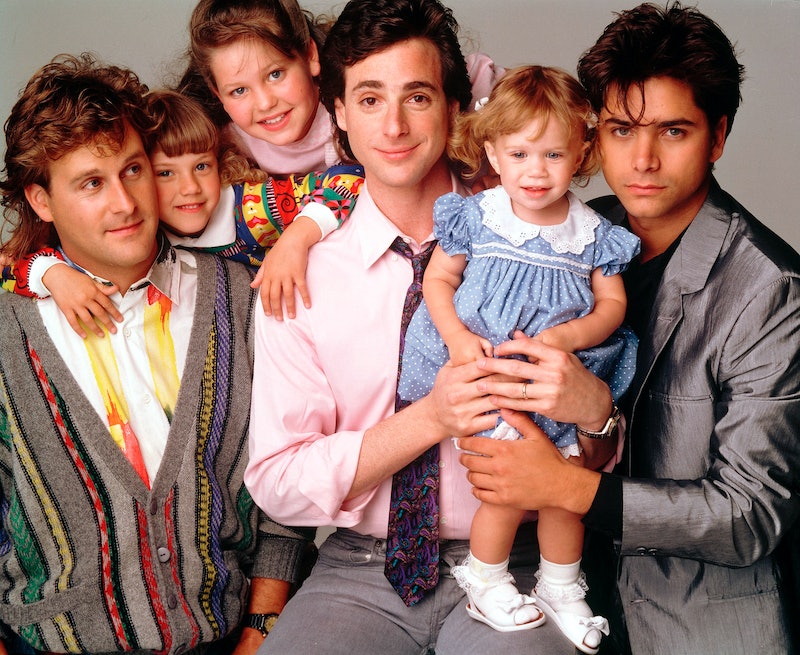 Everywhere you look there seems to be a deep resurgence of '90s trends and media, and none is more obvious that the inexplicable Full House comeback. Of course the Netflix sequel Fuller House is the glaring beacon of this comeback, but we have to give snaps to Lifetime's The Unauthorized Full House Story, a peek behind-the-scenes look at the making of the show... and likely a sure-fire guilty pleasure and basic cable mess. But even with all the judgement and inevitable live-tweeting, you have to admit that Full House could be Lifetime-level dramatic.

"But Mary Grace," you're saying, "Full House was a G-rated show that played gentle piano music every time Michelle didn't want to go to pre-school!" I get it, dear readers, I really do. For the most part, Full House focused on ridiculous non-problems that sprung up any of those lazy, self-righteous creatures didn't get their way. But among those, there were many ridiculous sort of problems that drove Very Special Episodes and made that piano music cut you to the core. To put it in another way, Full House could over exaggerate as much as any Lifetime flick does.

So in celebration of that wonkiness, here's a sampling of some of the most Lifetime-worthy dramatic moments from your favorite Nick at Nite staple, Full House.

1. When DJ Gets Caught With Like, One Beer At The School Dance

In this instance, Uncle Jesse lectures abound even though she was FRAMED, FRAMED I TELL YOU!

In actuality, DJ's crush and a few other scumbag middle schoolers were drinking in the hallway (like rogue amateurs) and Uncle Jesse caught her holding it while mocking their flippancy. ("The dance was lame now we're having a party!") No bueno. The demon 13-year-olds have her take the blame, until later on when her crush clears her name. But seriously, so many heaps of tears and lessons about trust were learned during this entire ordeal. What a night for the Tanners.

2. When Stephanie Drove A CAR Through The House

Oh my god, this child. There's nothing really plot-intensive riding on this moment aside from "Joey got a new car and Stephanie thought it would be fun to take it for a spin." She then runs away to Rebecca's house and this would all be pretty intense... if she didn't get sent back to the Full House immediately. And, you know the kitchen wasn't magically fixed by the next episode. In short, screw continuity.

3. When Jesse Jumping Out Of A Plane & Full House Is All "To Be Continued" You're All "No Way!"

He gets stuck in a tree, and if they really wanted to crank up the drama to 11 part two would be about his journey back home... and maybe a slow descent into cannibalism. But I guess the reality is sufficiently tense enough.

4. When DJ & Steve Mack On Other People At Prom & Break Up For Five Seconds

It's Steve's senior prom night, and it looks like there's trouble in River City (with a capital T that rhymes with P that stands for PROM). Steve's ex-girlfriend Rachel — who we've apparently never heard of despite her going to the same school as DJ and Steve — tries to break up the teen power couple by making out with a not-too-resistent Steve on the dance floor. Then DJ starts making out with Rachel's prom date, and it's a whole thing that leads to tearful arguing... and making up about .03 seconds later. You crazy kids.

5. When Papouli Died, And Everyone Was Devastated Because A Character We'd Met Twice Kicked The Bucket

Full disclosure: Papouli is a dead ringer for my own Papou, who was also very big, very Greek and very mustachioed... and yet I still have zero emotional response to the weep fest that follows his death. I guess I kind of get why at least Jesse would be disturbed by his passing, but why is Joey emotionally wrapped up in this? Did he die in Joey's bed? I don't... anyway, then it turns up the shmaltz when Michelle and Jesse performs Papouli's traditional Greek dance at her school. I can't believe this was really a thing that happened.

6. When Stephanie Almost Has A Cigarette, Then Doesn't, & It Almost Jeopardizes Her Popularity, But It Doesn't

Gia thinks she's totally lame, but her friend Mickey stands by her side, so there's pretty much no consequences. Classic Full House.

7. When Stephanie Goes To A Make-Out Party, Gets Uncomfortable, & Has Danny Pick Her Up

I have to say, those 12-year-olds are really going at it, so I can respect Stephanie's discomfort, but the real drama comes when Danny picks her up. There's grounding, you guys! And no TV for two weeks.

8. When Michelle Get AMNESIA Falling Off A Horse Gone with the Wind-Style

That's the note the series ends on, guys. You can picture it now. I Don't Got It, Dude: The Michelle Tanner Story.

Needless to say, this show is more than primed for this Lifetime movie.