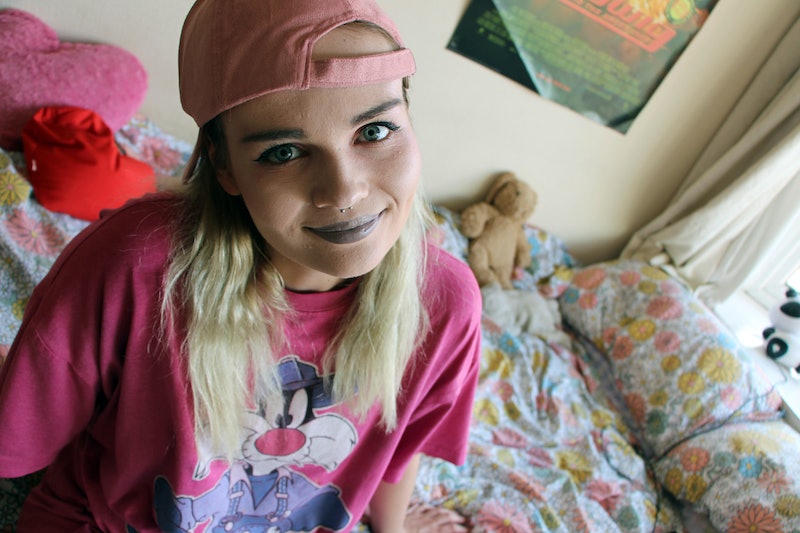 While I was growing up in the '90s, television shows constantly showcased trendy youngsters rocking backwards caps — whether it be TJ Detweiler from Recess, the Olsen twins back in their youths, or the Fresh Prince himself. Wearing backwards caps was definitely hip 20 years ago, and when Pokémon's leading cool dude Ash Ketchum spun his iconic baseball hat around, you knew it was time to party.

Fast forward to 2016. Many popular celebrities are often spotted donning the throwback trend with style. Justin Bieber, Kristen Stewart, Cara Delevingne, Kylie Jenner, Rihanna; they're all at it. There is something about the look that gives off a sense of street wise swag that isn't achieved through simply repositioning any other garment.

There's something about the backwards cap that exudes a vibe of nonchalant rebelliousness and not caring about what other people think, which is how I would actually personally define the word "cool." Obviously what everyone else finds as being inherently cool is mostly subjective, but there are certain fashion tropes that signify a sense of youthful freshness. As somebody who doesn't consider themselves as being either particularly cool or uncool, I set out to discover whether sporting this polarizing accessory would alter how others perceive me in any way — and whether or not I'd morph into a 90's TV character in the process.

The first day of my experiment coincided with a study date at Manchester's super cute Nexus Art Café, where I wore a black and orange trucker hat from Rebel 8; backwards of course over double braids - inspired by arguably the best throwback Jennifer Aniston look of all time. Something must've been going right because a friendly lady asked if she could take a quick photo of us sat amongst our laptops, coffee and baked goods, it was almost as though she recognised me off the TV or something.

Day two of the backwards hat bonanza coincided with my friend Jack's birthday, where we planned to drink booze in the park like naughty teenagers and pretend that we weren't genuine adults with rent, careers, and taxes to worry about. I picked out a fabulous pink suede baseball cap (that actually belongs to my glamorous fellow Bustle writer Georgina Jones) especially for the occasion, mostly because it matched my shiny new slip dress and colour coordinating your hat to your outfit felt like something that Mary Kate and Ashley would do.

Even though she knew all about the planning behind the look, Gina did actually mention that I looked cool. I was on a roll.

I'll tell you what isn't cool: Waking up with a hangover only to realize that you have misplaced your makeup bag and the entirety of it's contents. That's exactly how the third day of my backwards cap experiment began so I decided to opt for my boyfriend's camouflage hat to blend into my surroundings in an attempt to make myself feel less bleak. What I really needed was Clarissa to appear and explain it all , but the closest I could do on my own was to adopt some super sick styling from the show instead.

After asking said boyfriend's opinion on whether the backwards hat actually did make me look cooler, he simply responded, "Yeah, of course." It was at this point that I considered wearing one forever.

As a (sort of) convenient coincidence, our shower stopped working the same week I was working on this experiment. Luckily nobody could see the extent of how gross my hair had become because the backwards cap, an unforeseen perk.

Nostalgia truly kicked in when I came to realise that this is exactly why Clueless icon Cher Horowitz hated how the boys in her school lazily used a backwards cap for the very same reasons: “It looks like they just fell out of bed, put on some baggy pants, took their greasy hair – eww! – and covered it up with a backwards hat, and like, we’re expected to swoon?”

Around midday, our plumber came over to tinker with the boiler. He thought I was a new housemate, despite speaking to me in person several days before, enquiring as to where "the young lady in the side room" was. After revealing my identity, he laughed and said I looked younger the week before. Judging by his reaction, the backwards cap made me appear older as well as tricking this man into thinking I was an entirely different person.

On the short walk from the train station to the bank, I was offered salvation no less than four times. It was my own personal record. The only thing I was doing differently was wearing my hat the wrong way round — possibly this signified a desperate cry for help, a distinguishable alliance with Satan, or a slow metamorphosis into Marky Mark due to '90s pop culture over-exposure to these Christian street preachers.

When meeting up with friends after work, I realized that a pal of mine was wearing almost the exact same outfit. Without my backwardly turned Limp Bizkit cap, I wouldn't have stood out as a separate entity at all. Once again, the backwards cap had saved the day but I did momentarily delight in the thought that together we looked like a modern day Jay and Silent Bob.

Ignore that I'm wearing the exact same outfit as before but with a strategically placed jumper underneath — some days just call for laziness. Obviously being a real human being comes with it's own challenges in terms of finding weather appropriate clothing that is both clean and comfortable that doesn't really apply to fictional characters unless it's written in their storylines. We've all seen inside Bart Simpson's wardrobe that contains multiple clones of the same t-shirt, shorts and shoes that were picked out for him by his almighty creator Matt Groening. It was a lovely day, so rushing out to go and enjoy the sunshine was more important than taking forever to get ready.

Over the week it became apparent that my friends, partner, and peers all felt like the backwards hat was a genuinely cool look. I also learned that the style was particularly useful in terms of obscuring your identity, masking dirty hair, and making your outfit stand out from the crowd — all things that I was not expecting from this experiment. Although it's nice to finally let my head breathe and live without constant fear of end of the day hat hair, it turns out that backwards caps are as cool as their reputation after all, and becoming my own version of a '90s TV character was pretty cool in itself.