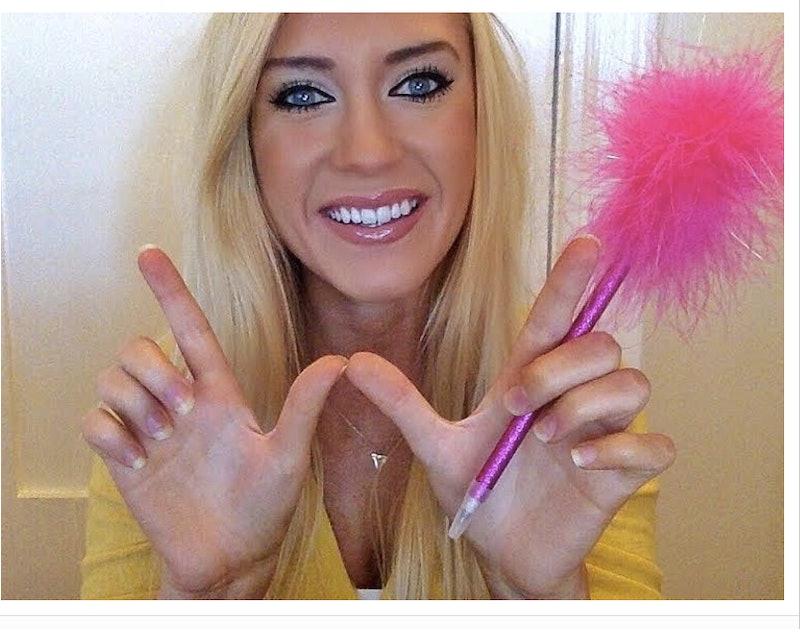 Three years ago, just a month after I moved to Los Angeles, I was completely lost driving around the city. My phone had died, and being a true Millennial, I didn't have a tangible map tucked in my glove box, nor the humility to stop and ask for directions. It was night time and the middle of winter — about 70 degrees — but as I drove down the sunken roads towards God knows where, it felt suddenly ... hotter. How was that possible? Where the hell was I? As my optimism dissolved, there was a sudden ray of hope in the form of a yellow and blue neon flashing sign. I threw on my blinker and made a sharp turn into a parking lot I knew all too well. The luminous sign towered above me: a ginormous, terrifying clown holding a round drum with the words "Circus Liquor." I was ecstatic. Not only had I stumbled upon a shooting location from one of my favorite films, Clueless , but I now knew exactly where I was — and felt much less like a bonehead.

An avid Clueless watcher since the age of eight (it was the first PG-13 movie I was allowed to view), I have the many quips Amy Heckerling had so cleverly crafted tucked in my back pocket for whenever a reference is warranted. "Looks like we're gonna have to make a cameo at the Val party," was a line I had used all throughout my high school and college years. And here I was in the Valley, in the exact spot that forced Cher Horowitz to ruin her dress when she was robbed at gunpoint after the aforementioned bash. Hallelujah!

I don't remember how I ended up finding my way home that night, but I do remember feeling an immense sense of excitement and sudden purpose in the City of Angels. I had come to the city to write about movies, and here was a literal sign from one of my favorite films urging me to follow my cinephile dreams. That, or to pick up a six-pack of brewskis.

With the 20th anniversary of Clueless this month, I wanted to revisit the film I had seen at least 50 times before — this time, with fresh eyes. I would utilize my experience stumbling upon Circus Liquor and see what other LA-based locations I could discover. And I went one step further. I decided to become '90s icon Cher for a day. I already had the hair, so finding a 1994 white Jeep Wrangler and a 1970s Beverly Hills mansion should be a piece of cake, right? Well, here's what happened.

If I was going to become Cher, I'd need a killer set of threads. Though I don't possess the iconic rotating closet we see in the opening moments of the film, (though apps attempting to mimic the closet do exist) I figured I'd emulate her most recognizable outfit: the yellow plaid. Acquiring the outfit took a bit of effort, however, as bright yellow tartan doesn't seem to be quite as in style in 2015 as it was in 1995.

I ended up purchasing a yellow cardigan, T-shirt, and over-the-knee socks from the Beverly Center (the same mall that acted as the interior shots for Cher's shopping sprees), and ordered a skirt online. I also bought a black faux-leather backpack similar to one Cher wears in the movie. Success? Not totally, but I wasn't completely buggin' — the look certainly made me feel like a stylish high schooler from decades past.

Oh, the '90s, how you loved your many shades of brown lip liner! Does anyone, aside from Kylie Jenner, wear lip liner on a regular basis any more? It's hard to say, but Cher sure did love her mahogany-inspired lip color. And for the purposes of my day out as Cher, so did I.

Luckily, Spotify has the entire Clueless soundtrack available for streaming. I put the soundtrack on blast as I slipped on my over-the-knee socks and reluctantly lined my lips in chocolate colored liner.

Cher drives a 1994 white Jeep Wrangler in the film. It has an open top so that her blonde tresses can tangle and dance in the eternally warm SoCal air. Two weeks before my day as Cher, I placed an ad on Craigslist looking for someone who might own the elusive vehicle I hoped to drive around town, pausing — or not pausing — at stop signs. But no dice. I'd have to settle on my own car: a 2014 black Prius, the opposite of chic. I stocked my car with a few time-appropriate CDs — No Doubt's Tragic Kingdom, Radiohead, Beastie Boys, The Muff — and looked on the bright side: At least my driving all across Los Angeles would be fuel-efficient.

... Which is actually a gated house in Encino. No, really. Though the columns may date back to 1972, I couldn't see them from my street-side view. For the uninitiated, Encino is in the San Fernando Valley, and is nowhere near where Cher lives in Beverly Hills.

As Cher's ex-stepbrother-turned-lover Josh says, "You get mad if anyone thinks you live below Sunset." Not only is this house located below Sunset, but it's not even on the Westside! As if! I was disappointed to not see the Horowitz estate up close and in person, but there were so many places on my self-led tour yet to see. Onwards!

Dionne's mansion is located in a well-to-do Beverly Hills neighborhood. "She's my friend because we both know what it's like to have people be jealous of us," Cher says of BFF Di in the film. While her home in the film looks very similar to the house I visited in 2015, there are hefty hedges that have grown up around much of my vantage point.

I snapped a few photos from the best angles I could find and hopped back into my Prius (after getting some serious side-eye from the neighbor's gardener). "Another Cher-centric loadie," he probably thought, while secretly admiring my new purple clogs. Whatever, I'm Audi!

... Where I may or may not have paused. And though I didn't have to break for animals, I did appreciate that this stop sign was actually located around the corner from Di's house in Beverly Hills. A couple walking their dog politely asked what I was doing taking photographs of a stop sign, to which I replied: "It's for an article." They nervously laughed and turned the corner, probably before calling upon their Neighborhood Watch and reporting the snap-happy peasant in the Prius.

A Trip To The Mall

As I previously noted, the interior shots of Cher's sanctuary were filmed in West Hollywood's Beverly Center, but the exterior is taken from the Westside Pavilion, much closer to where Cher's house should be located. Though the mall still exists (and is home to one of the better movie theaters in LA), it looks much different than it did two decades ago. In 1995, it looked like this:

And in 2015, the bright colors have been traded in for a drab shade of grey. Hagsville.

Cameo At The Val Party

Perhaps the most disappointing stop on my Clueless tour was the Val party house. Freshly bulldozed, the house that was once home to dozens of teens signing "Rollin' with the homies" at varying degrees of success was now a pile of dust and bricks. A team of men in orange hard-hats were busy sorting through the wreckage, and I reluctantly snapped a photo.

One of my favorite behind-the-scenes stories of filming Clueless takes place at the party in the Valley, where two extras in the pool were instructed to make out. They later got married, according to writer/diretor Amy Heckerling. On a scale from one to totally buggin', I wonder how the lovebirds feel about the house — where their romance was born — being destroyed. I for one found it a travesty.

Though it was daytime when I revisited my favorite (and arguably Cher's least favorite) liquor store in Sun Valley, and I wasn't wearing anything near as expensive as an Alaia, my trip to Circus Liquor was met with a heavy dose of nostalgia.

Twenty years ago, an 18-year-old Alicia Silverstone was on her hands and knees in this very parking lot at the mercy of a mugger, until her knight-in-flannel-plaid, Josh, came to save her. I was happy to see the scene of the crime had been left unaltered more than two decades later.

When Cher has the epiphany that she in fact loves Josh, it is perfectly timed to the hot pink lights of Beverly Hills' Electric Fountain. Unfortunately for me, the tourist attraction was under renovation when I went to visit it, and all I got was a picture of this lousy sign.

Feeling distraught about the lack of backlit water I hoped to experience at the Electric Fountain, I decided to take a drive through the neighborhoods of Beverly Hills. The perfectly-kept streets and gorgeous houses were the perfect remedy, and I stumbled upon another Clueless location I had entirely forgot about: The whimsical, gingerbread-esque house!

Only shown for a few seconds in the film, we see the unique abode when Cher is wandering aimlessly around Beverly Hills, feeling shitty about failing her driver's test and her muddled feelings about Tai and Josh. This home, which had a family snapping pictures when I approached it, appears to have stayed basically the same over the past 20 years.

My day as Cher was as delightful as a Dr.-Seuss-inspired hat, and though some of the landmarks I was dying to see (R.I.P. Val Party House) were gone entirely, these spots, and many more — Bronson Alcott High School, Josh's terrible date Heather's dorm room — will be immortalized in the iconic and enduring film, which is as enjoyable for me today as it was 20 years ago.