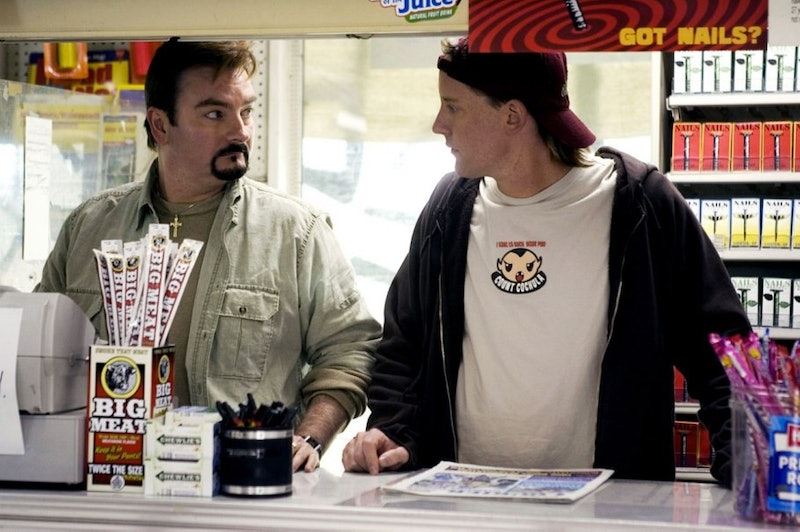 I think the first time I felt a man's erection was while making out against the church from Dogma. It could've been the second time, it could have been Red Bank Catholic, it could have just been car keys, which would've been odd since my high school boyfriend didn't have a car. Suffice to say, the reason I'm comfortable telling you that is because I grew up in Kevin Smith's New Jersey, also known as the View Askewniverse. And as Clerks 3 is set to start filming and the original Clerks celebrates its 20th anniversary on Sunday, I couldn't be prouder.

To recap, Clerks is Smith's 1994 indie debut. It follows a day in the life of clerks Dante Hicks (who's famously "not even supposed to be here today") and Randal Graves as they talk about Star Wars, play hockey, and shoo away stoners Jay and Silent Bob. It may not sound like the formula of a blockbuster, but it became a seminal film of the 1990s, characterizing Gen X slacker culture. No big deal.

Clerks was shot at Quick Stop Groceries in Leonardo, New Jersey, right off Route 36 on the way to the actual Jersey shore. It is a 15-minutes-or-less drive from my house, and I may have shoplifted a copy of The Aquarian there once. If so, it's only because those are given out for free in an overwhelming percentage of New Jersey stores, but I digress. Between Quick Stop, casual mentions of Brookdale Community College (where I spent a slacker summer getting my life sorted out) and constant cameos of Red Bank, the View Askewniverse has been the backdrop of my adolescence.

For a lot of my friends, growing up where Clerks was filmed gave us this weird sense of community in what would otherwise be just another awful New Jersey suburb. It made us feel as if this tiny moment in pop culture belonged to us, so we became obsessed. We loitered in front of Jay and Silent Bob's Secret Stash, and waited in agony for Clerks 2 to come out (which it eventually did, and it was aggressively fine).

Most interestingly, in watching and rewatching these films, I've noticed they breed a weird, distinctive way of communicating. On a base level, Kevin Smith movies are a barrage of dick and fart jokes. As I previously implied, they're spoken in an upfront dialect of bluntness and vulgarity. However, interwoven within these seemingly crude and mundane discussions were important dialogues about everything from race to sexuality to slut-shaming. Don't believe me? Watch Alyssa tear Holden apart for judging her sexual past in Chasing Amy. Or watch Dante's argument with girlfriend Veronica about the number of girls he's slept with (12) versus the number of guys she's given a blow job. (Thirty-six. No, wait, 37.)

It's not poetry, it's not quite sophisticated feminist discourse, but it's an unpolished, uncensored honesty so rarely seen in cinema, and something I carry with me.

Smith is not without fault (being a human being and all), but he's definitely a hero for bringing his own brand of distinct humor with underlying intelligence to an otherwise culturally devoid county. And he's an inspiration for fulfilling what every vaguely creative kid here hopes to do: Become famous and get the hell out of New Jersey.

Which, for the record, is something the protagonists of Clerks never truly did. Ten years later in Clerks 2, they come to the conclusion that lounging around Quick Stop, barely doing their jobs, talking about Star Wars, marked some of the best years of their lives. By extension of that, I'm assuming that one day I'll look at this time period of working in New Jersey, getting paid to talk about Charlie Brown and Courtney Love and all things Clerks, and recognize it as the best years of my life. Although I really hope that's not the case.

Regardless, I can thank Smith and his successful 20-year career for inspiring me and countless others to believe that there's something worthwhile in the mundane, and something intelligent in the grotesque. Without Clerks, I would've been a quiet, G-rated shadow of myself who felt trapped in Monmouth County. Instead, I'm a proud, no-subjects-off-limits misfit who, despite wishing desperately to be in New York, holds my homeland with great reverence. You think I'm just being cute to wrap up a story, don't you? Go ahead. Let's talk sex. Let's talk Star Wars. I assure you, I'm open.