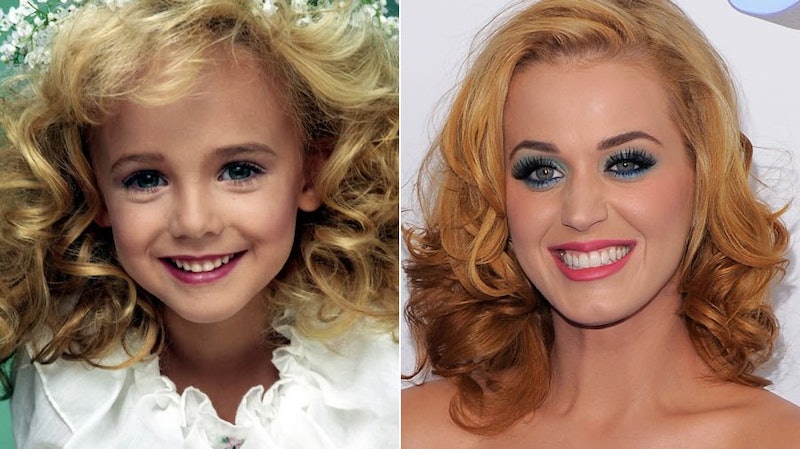 I was six years old when child beauty queen JonBenét Ramsey was found dead in her parents' basement in Boulder, Colorado on Dec. 25, 1996. The mysterious circumstances of her brutal murder, which have incited a wide array of JonBenét conspiracy theories, deeply troubled me back then for many reasons. I was the same age as the victim, we bore a passing resemblance (blonde, blue-eyed, fair skinned), her face was everywhere for a while, and my sister had even competed in a beauty pageant or two at that point. So, reasonably, I felt nothing but relief when the JonBenét case stopped receiving so much national coverage.

As an adult, however, the fact that JonBenet's case remains unsolved nearly 20 years after her death still haunts me. So even though true crime isn't normally my jam, I'm actually really supportive of this whole JonBenét Ramsey resurgence thing that A&E kicked off last week with their highly anticipated documentary, The Killing of JonBenet: The Truth Uncovered. That said, the title is certainly misleading. Unfortunately, we'll probably never know for certain who killed JonBenet at this point, but I don't think that means we should stop trying to figure it out (though there are clearly far more important things happening in the world).

Clearly, I'm not the only American who feels this way, either — because JonBenét conspiracy theories abound. Some conspiracy theorists believe JonBenét is literally Katy Perry. Others think aliens killed her because they were jealous of her beauty. (Sadly, I'm being completely serious here. No, really, look it up.) Here are five of the weirdest ones.

If you haven't heard all about why some conspiracy theorists believe Katy Perry is actually JonBenét Ramsey all grown up, then I'm happy for you, because this nonsense is all over the Internet. In fact, it's all I could find when I first started researching this article, because almost every major website has reported on it.

It all started back in 2014, when a YouTube user named Dave Johnson posted a video detailing all the reasons he believes Katy Perry and JonBenét Ramsey are actually the same person. Mainly, he focuses on how much Perry and Ramsey resemble each other, and how much their parents resemble each other as well. He's not wrong, exactly. They all do kind of look alike — but I look like Meryl Streep, and no one's started any conspiracy theories about that. Additionally, Perry was born in 1984 and Ramsey was born in 1990 — but, um, details.

In 2015, after Johnson's video went viral, another YouTuber posted a video which also claims JonBenét grew up to be Katy Perry. This user, YouTuber VK33, claims that Katy Perry alludes to her "true" identity in her memoir. Evidently, the lines, "Not that I was one of those stage kids. There was no JonBenét Ramsey inside of me waiting to burst out," have convinced some people that Katy Perry and JonBenét are the same person. My opinion? It's a load of BS.

2. JonBenet's Death Was Part Of A Satanic Ritual

I wasn't at all surprised to discover that certain corners of the Internet believe JonBenét Ramsey's murder was ritualistic in nature. What did surprise me a little bit was this: There actually is a sacrificial ritual which is allegedly meant to be performed on Christmas Eve. It's called, "The Last Bulb of the Christmas Tree." Apparently, it was created by Josef Mengele, a German SS officer and physician who performed deadly human experiments at Auschwitz concentration camp during World War II. Additionally, some conspiracy theorists claim "JonBet" is a Brotherhood term for Devil, making JonBenét the "perfect victim" for this particular sacrificial ritual.

As The Huffington Post reported back in 2012, a former lead investigator on the JonBenét case, James Kolar, doesn't buy this theory at all. In fact, he wrote an entire book about why he doesn't believe the intruder theory and titled it, Foreign Faction: Who Really Kidnapped JonBenet? That said, there's ample evidence suggesting that the intruder theory has very real merit. Actually, of all the conspiracy theories surrounding JonBenet's murder, the intruder theory is possibly the most compelling one.

DNA evidence found back in 2008 suggests that a man with no relation to the Ramsey family was involved in the murder. On top of that, an analysis of the infamous ransom note found that there's no way anyone in the family could have penned it. However, according to The Daily Mail, there's just as much evidence that someone in the family did commit the murder. Which brings us to...

4. JonBenét Was Murdered By Her Family

The entire Ramsey family was cleared of JonBenet's death all the way back in 2008. However, many conspiracy theorists still allege that JonBenét died at the hands of one (or both) of her parents, or that her older brother killed her out of jealousy. Moreover, authorities held John and Patsy Ramsey under the "umbrella of suspicion" for 12 years, and court documents released back in 2013 show that a grand jury thought there was enough evidence to indict the Ramseys on charges of child abuse resulting in death and being accessories to a crime. Plus, as the Daily Mail reported earlier this year, there were no footprints in the snow around the Ramsey's home. This case detail alone has lead some investigators to believe that the killer had to have been someone JonBenét knew and trusted — possibly a relative.

Equally troubling is the fact that the JonBenét ransom note was abnormally long (over 300 words) and composed in a disconcertingly personal way. Not only was the note written in the Ramsey's house and on their own notepad, the requested amount for JonBenet's ransom was the exact same amount as John Ramsey's then-recently received Christmas bonus. Coincidence? The Internet thinks not. Our legal system says otherwise.

Two nights before JonBenét was murdered, Bill McReynolds played Santa Claus in the Ramsey's home. According to CNN, on that same night, McReynolds gave JonBenét a card that read: "You will receive a special gift after Christmas." On top of that, McReynold's own daughter was abducted exactly 22 years, to the day, before JonBenét was found dead. Even more troubling, McReynolds' wife Janet actually wrote a play about a girl who was molested in her basement before being murdered, which is precisely what investigators believe happened to JonBenet.

All of this speculation is somewhat irrelevant, though, because both of the McReynolds were absolved of any crime. As CNN reported back in 2006, "The couple gave hair, handwriting and blood samples, but were eventually cleared thanks to DNA tests." Moreover, Bill McReynolds died back in 2002.