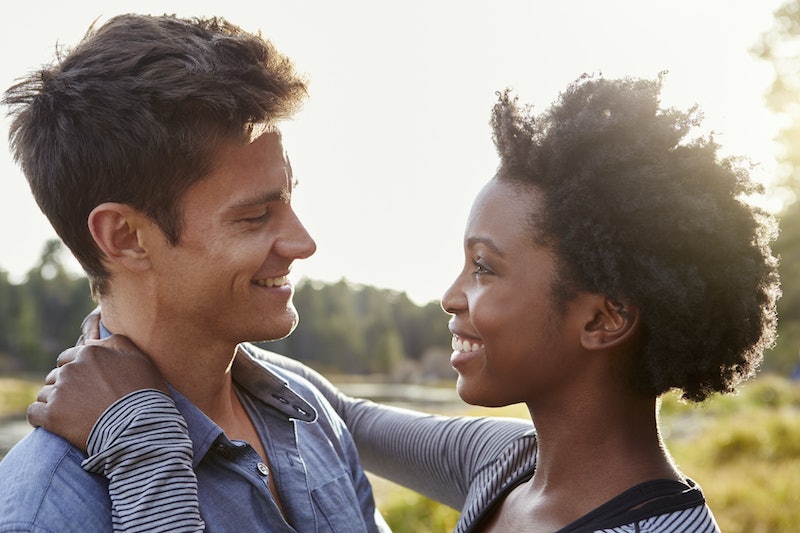 As it turns out, Millennials are pretty good at handling their money. According to the second annual TD Bank Love & Money Survey, money talks play a huge role in a couple’s life and relationship satisfaction. It's so significant that 74 percent of Millennials say they discuss money weekly, and those who do discuss finances at least once a week say they’re much happier than those who talk about it less than every few months.

TD Bank conducted a survey of 1,902 adults in relationships to see how couples in different age groups talked, spent, and managed their money, as well as if they kept any financial secrets from their partners. A majority of all couples classified themselves as being “married” or “committed.” The survey was completed between July 20-29 of this year, and results were compared to those of last year.

“Talking about money is immensely important,” Priya Malani, co-founder of Stash Wealth tells Bustle. “Studies show that spending habits and money decisions are a very clear indicator of your values and priorities in life. So if you and your partner have vastly different spending habits and you don't have a system in place to manage the difference, it's likely there will be conflicts in other areas of life as well.”

When it comes to happiness and commitment, Millennials have it good. In comparison to older age groups, Millennials (18 to 34-years-old) were found to be much happier in their current relationships, with 49 percent saying they’re “extremely happy” with their “soulmate.” On the issue of money matters, Millennials were also more likely to to talk about money at least once a week, if not daily. As analyzed, those who talked about money more often were happier with their significant others overall.

Here are some other stats on love and money:

1. Over One Third Of People Have Discussed Incomes Before Meeting Someone They Met On A Dating Site

Although nearly half of Millennials say they’ve discussed incomes so early in the dating process, Malani says that it’s not necessary to talk about the big things. “Quite frankly, the little things are sometimes tremendous indicators of how a person might handle the big things. Usually, in the early stages, financial conversations tend to come up in context of other things that might be going on in life,” Malani says.

Examples of the “little things” that are OK to bring up are:

“All these little moments provide clues to your partners attitude towards money and spending patterns,” Malani says. “Once the relationship reaches the stage that you are making day-to-day decisions together and possibly even discussing moving in together, that's a perfectly appropriate time to bring up bigger things like how to split daily expenses, other debts you may be dealing with (student loans, etc.) and even other financial priorities/responsibilities on your plate.”

2. A Majority Of Millennials Keep A Budget

When it comes to budgeting, over half of Millennials budgeted for all the following categories: groceries/alcohol, eating out, entertainment, travel, and clothing/personal items. Interestingly enough, 68 percent even have money set aside for savings or unexpected expenses, which is more compared to the amount of Gen Xers and and boomers.

But just because Millennials budget, that doesn’t necessarily mean they stick to it. Only 38 percent actually do, and unsurprisingly 65 percent say the “dining out” budget is the first to go.

4. If You’re Dating, It Pays To Pay Your Bills On Time

As the survey found, 44 percent of people say they’re less likely to date someone with credit card debt.

5. Millennials Are Twice As Likely To Break Up With Someone If They Discover A Financial Secret, However…

A 2014 Money Magazine survey found that 70 percent of couples argue about money more than anything else. If you want to know how to successfully balance love and money, Malani offers up these three simple tips:

1. Don’t Wait Too Long: The longer you wait, the more you’ve relinquished your right to advise your partner on their habits, especially their more financially destructive ones.

2. Set Goals And Build A Financial Plan Together: Your plan should outline short, mid and long-term goals that you’re working towards. When you have concrete goals in mind, you’re both more likely to make decisions that are in the best interest of your relationship.

3. Create A Money Date: In order to do this, check in on the progress you’ve made towards your financial goals once a month. “It is super encouraging and some might even call it an aphrodisiac when you see how awesome you’re doing as a team,” Malani says.

But most importantly, the key to balancing love and money? Do it together.

More like this
The Best Time To Date After A Breakup, According To Experts
By Bustle Editors
What Is The Forest Personality Test? The TikTok Trend, Explained
By Georgina Lawton
Expert Tips For Being On Top When You're Plus-Size
By Lexi Inks
Gemma Collins' Net Worth Is Only Going Up
By Catharina Cheung
Get Even More From Bustle — Sign Up For The Newsletter