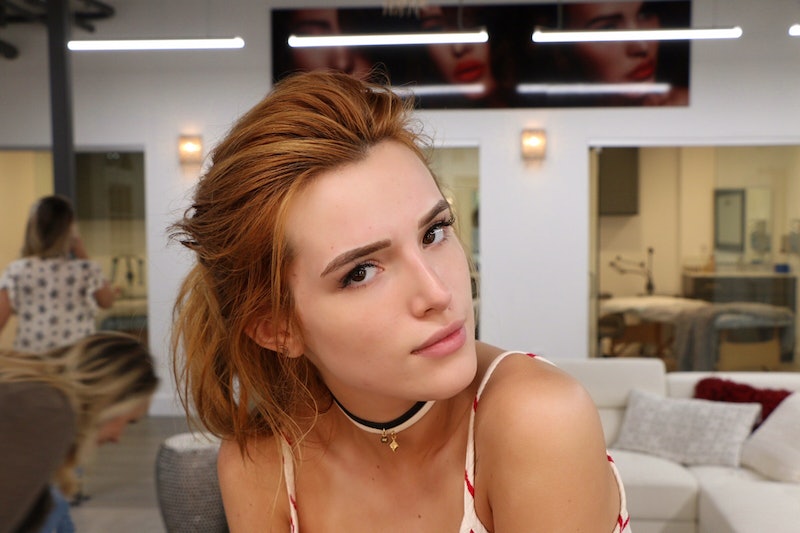 Just a few weeks ago, teen queen Bella Thorne's eyebrows made headlines across the beauty industry when the actress made a major change to her natural arches. Thorne posted a series of Snapchats documenting the process of tattooing her eyebrows, and fans were quick to ask what exactly was going on.

Turns out, Thorne microbladed her eyebrows, an increasingly popular option for people who want full, natural-looking brows that seriously last — after an initial appointment and a touch-up a few weeks later, your brows will look perfect for a year. Sounds pretty crazy, right?

Microblading — also known as eyebrow embroidery — is the process of using a small needle to tattoo hair-like strokes of ink on your brows to make them look fuller in a very natural way. For people like Thorne, who has lighter natural brows, it can be a good way to add definition and drama to your face. And as someone who uses three eyebrow products every day to make my light brows look darker, I can see why the idea of cutting out that step was appealing to Thorne.

And luckily, I've got all the exclusive details about Thorne's microblading process from her salon: Microblading LA.

About a month ago, Thorne turned to the LA-based salon, which exclusively does microblading, for an eyebrow makeover. According to the salon, Thorne found it through Instagram, where its microblading artists regularly post before and after pics of clients and their brow transformations.

As you can see, Thorne's natural brows were pretty light. Because she's an actress, she wanted her microbladed brows to have a very natural-looking shape and tint.

I'd say she succeeded! Post-microblading, Thorne's brows had a gorgeous shape and natural-looking hairstrokes, but they weren't over the top at all.

Last week, Thorne returned to the salon for a second appointment with Elmassian. About a month after the initial microblading, clients return for a complimentary touch-up.

"Touch ups are normal with microblading because everyone’s skin is different," Elmassian tells me. "Some people don’t need it, but some people lose hairstrokes and we need to do it again. Plus, we don't use a machine, so there's less ink and we don't go as deep. Every stroke is done by hand. It's an art."

Although Thorne's initial appointment took about two hours, the touch-up appointment was much quicker — about 30 minutes. "Bella eyebrow’s healed perfectly," Elmassian says. "We added a few strokes, but it was a very quick touch-up."

Thorne was super happy with the look, and she's already referred a few friends to the salon. And the best part? She'll have those perfect looking brows for about a year. At that point, she'll go in for another touch-up appointment. But until then, her brows are probably the most low-maintenance part of her beauty routine.