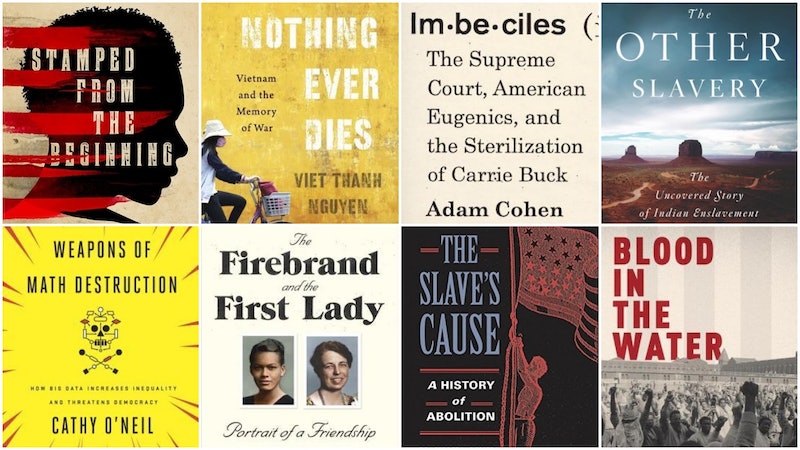 If you love microhistories, the 10 titles on the 2016 National Book Award for Nonfiction longlist belong on your TBR. The NBA committee has selected a wide range of titles, many of which are eerily relevant to today's political situation.

Most striking among the finalists is Viet Thanh Nguyen's Nothing Ever Dies: Vietnam and the Memory of War. Nguyen's 2015 novel, The Sympathizer , took home the Pulitzer Prize for Fiction earlier this year. The win came as a surprise to the many who expected Hanya Yanagihara's Man Booker-shortlisted A Little Life to score the coveted award.

Five of the 10 books on the 2016 National Book Award for Nonfiction longlist were written by women, down about 17 percent from last year. This year's batch mostly features titles about race and war, while memoirs dominated the 2015 longlist.

The National Book Award judges will reduce the longlist by 50 percent and announce the five finalist titles sometime in October. This year's panel includes Wake Forest University's Maya Angelou, Presidential Chair Melissa Harris-Perry, and Russian-American journalist Masha Gessen, who is best known for her books on punk protesters Pussy Riot and Vladimir Putin's path to power. Also included are three authors who have been up for the National Book Award before: Cynthia Barnett, Greg Grandin, and Ronald Rosbottom.

2. The Firebrand and the First Lady: Portrait of a Friendship: Pauli Murray, Eleanor Roosevelt, and the Struggle for Social Justice by Patricia Bell-Scott

Shortly after President Franklin Delano Roosevelt gave a speech praising the University of North Carolina, Chapel Hill for its progressive leanings, he and his First Lady received a letter from Pauli Murray: a young poet who had been denied an education at UNC Chapel Hill because of her mixed-race ancestry. That letter began a 25-year-long friendship between Murray and Eleanor Roosevelt.

3. Imbeciles: The Supreme Court, American Eugenics, and the Sterilization of Carrie Buck by Adam Cohen

Until the late 20th century, forced sterilization was commonplace in the U.S. Performed in the name of societal improvement, American eugenics projects unfairly targeted women of color, rape victims, poor women, and those with disabilities. In Imbeciles, Adam Cohen unfolds the long history of forced sterilization in the U.S., with focus on one of its most prominent victims and the Supreme Court case she lost.

4. Strangers in Their Own Land: Anger and Mourning on the American Right by Arlie Russell Hochschild

As the 2016 election cycle goes further down the rabbit hole, a lot of progressives have found themselves wondering just what in the world is wrong with the conservative base. In Strangers in Their Own Land, liberal Arlie Russell Hochschild journeys to Lake Charles, Louisiana to connect with red-state Republicans and understand why they vote the way they do.

5. Stamped From the Beginning: The Definitive History of Racist Ideas in America by Ibram X. Kendi

In this sweeping history of American racism, Ibram X. Kendi debunks the idea of the U.S. as a post-racial society, exposing how centuries-old myths about race continue to affect black men and women today. What's more, Stamped from the Beginning shows that calculated efforts to support and maintain the status quo, not simple misunderstanding and ignorance, lie at the heart of racist sentiments.

6. Nothing Ever Dies: Vietnam and the Memory of War by Viet Thanh Nguyen

In the U.S., the Vietnam War — known in Vietnam as the American War — has become a symbol for unnecessary military involvement, marked by the toll it took on the bodies and minds of the drafted soldiers who returned home. But the war affected much of Southeast Asia, and has left many places in the region permanently changed. Now, using literature, photography, museums, and memorials, Pultizer Prize-winning author Viet Thanh Nguyen has put together a comprehensive history of the Vietnam War and its legacy.

Both Big Data and its possible regulation frighten the more paranoid among us, but Cathy O'Neil argues that reform is necessary if we want to prevent data collection from ruining lives. In Weapons of Math Destruction, the self-professed "data skeptic" examines how unchecked data analysis keeps marginalized individuals from improving their station.

8. The Other Slavery: The Uncovered Story of Indian Enslavement in America by Andrés Reséndez

Across the Americas, indigenous peoples spent centuries living in illegal bondage. In The Other Slavery, Andrés Reséndez argues that it was forced servitude, not plagues of unfamiliar illness, that contributed to the widespread elimination of Native American societies across the continent.

9. The Slave’s Cause: A History of Abolition by Manisha Sinha

"Abolitionist" brings to mind an inspired, well-to-do white woman who found something to fight for. In The Slave's Cause, Manisha Sinha disputes this narrative, offering instead an image of people from all walks of life who were drawn to common ground by shared socialist and feminist leanings.

10. Blood in the Water: The Attica Prison Uprising of 1971 and Its Legacy by Heather Ann Thompson

In 1971, prisoners at New York's Attica Correctional Facility took over the compound, holding guards and civilian employees hostage in exchange for improved conditions and treatment. After four days of negotiation, the state sent in armed police and corrections officers to recover Attica. Thirty-nine prisoners and hostages were killed, and none but the prisoners ever stood trial for the violence. Heather Ann Thompson's Blood in the Water is the first comprehensive account of Attica's history and legacy.

More like this
Zosia Mamet Opens Up About Her Eating Disorder
By Zosia Mamet
Watch The Emotional Trailer For Dolly Alderton’s 'Everything I Know About Love'
By Bustle UK
10 Must-Read New Books Out This Week
By K.W. Colyard
How Reality TV Stars Conquered Your Bookshelves
By Anna Peele
Get Even More From Bustle — Sign Up For The Newsletter