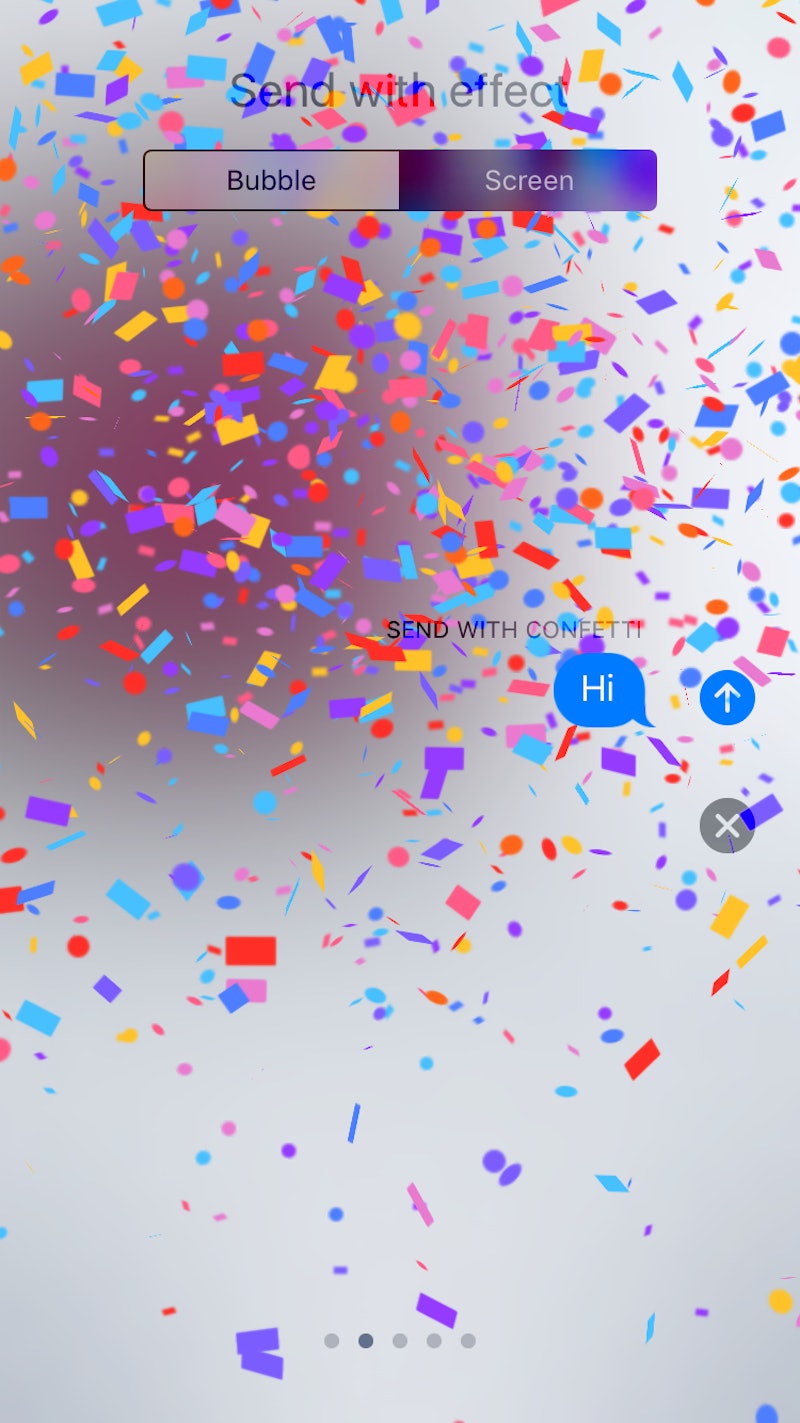 You know how the story goes with technology — as soon as you master one thing, another exciting development comes along. And, naturally, the release of iOS 10 on Tuesday means there is no shortage of new stuff to learn, leaving you to wonder things like, "What are Screen Effects in iOS 10?" Not to be confused with Bubble Effects (more on that in a minute), Screen Effects open up a fun and hitherto untapped world in text messaging: The actual screen.

The big emphasis where bedazzling your texts is concerned has historically been within the message itself: For example, we have countless emoji at our fingertips to express our innermost desires; some apps allow us to add stickers to those messages; and wth the advent of iOS 10's Bubble Effects, messages themselves have become reactionary. For instance, the Slam effect causes you text to slam down on your recipient's screen — causing all of the other messages and emoji and the screen to quake from the aftershock. But little thought has been given to the background screen that serves as the canvas for our messages.

Until now, that is. With Screen Effects, you can actually send animated backgrounds with your messages ... and we are so here for it. Here are some of the Screen Effects you'll want to add to your messaging repertoire, STAT.

This effects sends a colorful array of balloons floating up from the bottom right of the screen.

When to use it: Nothing says "Happy Birthday!" like a bunch of balloons; indeed, you can also use balloons in a Messages text simply by sending the words, "Happy birthday!" But, hey, floating rubber orbs of air are nothing if not versatile, so you can pretty much use these guys for any celebratory occasion.

Hip, hip, hooray — this effects rains down confetti from heaven. Or, you know, the top of your phone's screen.

When to use it: Did your BFF get that big promotion? Did your mom finally figure out the eggplant emoji does not mean what she thought it did? There are many accomplishments and moments of distinction that deserve a shower of confetti.

Unce ... unce ... unce. Do you hear that? It's the tell-tale sound of lasers filling your phone's screen.

When to use it: The sky's the limit, my friends. Let your nerd flag fly and send it anytime you talk about something super-techy. Send it when you want to start a a little IM rave. Use it whenever you don't mind getting that unce, unce, unce sound stuck in your head all day.

There's just something about gigantic pom-poms of spark exploding in the sky that make a person feel festive. And by "sky" here, I clearly mean your phone.

When to use it: This should be reserved for particularly momentous occasions, no? This is like the Screen Effect equivalent of an uncorked champagne bottle. Interpret that as you will.

When to use it: During late night convos, or when you need a little extra magic in your life. So oh, you know, every day.