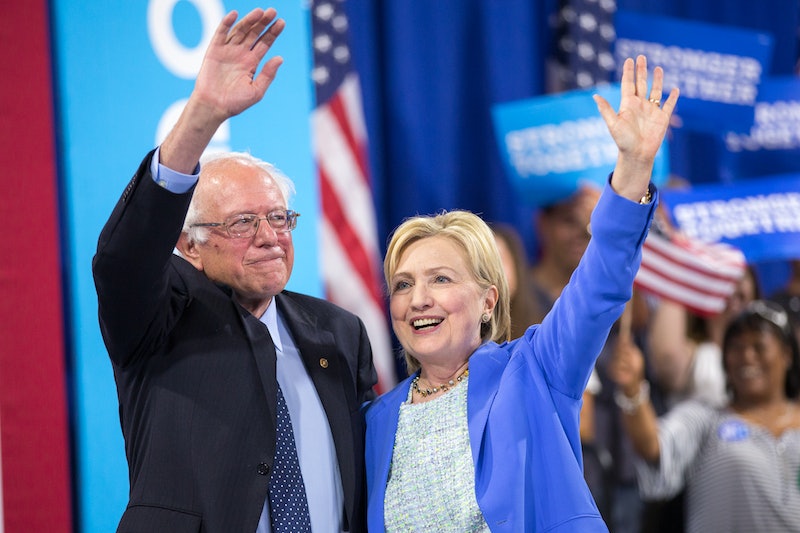 Despite the fact that the two were competing to become the nominee for the same major party, some Bernie Sanders' backers don't believe that Hillary Clinton has enough in common with the ideals, values, and policies of the Vermont senator to earn their votes. This may be especially true for millennial voters, who threw their support behind Sanders in the primary, 71 to 28 percent, according to ABC pollster Gary Langer. While millennials prefer Clinton over Trump, there's growing concern that millennials may turn to third-party candidates in such large numbers that it may give Trump the edge — and even the Vermont senator has recently warned against this.

As Sanders, himself, pleaded at an event in New York on Tuesday:

Before you cast a ‘protest vote’ — because either Clinton or Trump will become president — think hard about it. This is not a governor’s race, this is not a state legislative race. This is the presidency of the United States. And I would say to those people out there who are thinking of the ‘protest vote,’ think about what the country looks like and whether you’re comfortable with four years of a Trump presidency.

The truth is, the two candidates have many similar views, and their voting records prove it, especially on many of the the hot-button issues of this particular election year. According to the New York Times, during the years the two were U.S. senators at the same time, they voted the same way 93 percent of the time.

So for Sanders' supporters who are still on the fence, consider these six ways Clinton and Sanders are alike.

When it comes to paying for college, both Clinton and Sanders want to minimize debt and believe that going to college should be more accessible and financially realistic for everyone. Sanders' plan is more progressive, aiming to make university free, while Clinton's plan is more conservative. But she is coming around to fit her position to look a bit more like Sanders' — even taking on his idea to make in-state schools free to families below a certain income level.

Sanders and Clinton alike have a perfect score with Planned Parenthood and have consistently made women's health and reproductive rights a major part of their campaign. It's plain and simple; they are both committed to women's reproductive freedom.

Both candidates support comprehensive immigration reform and also agree on major immigration policies like getting behind the Dream Act and developing a path to citizenship. While Clinton would rest at enforcing the laws President Obama's administration has put in place, Sanders would nudge the needle and expand on Obama's work on immigration. Certainly, this may be an important difference between the two politicians; however, the disparity seems far less significant when compared to say, Trump, and his plan to build a wall and potentially forcibly remove millions of undocumented immigrants.

Gun control reform is actually an area where Sanders' base, which tends to be more socially progressive, would probably prefer Clinton's stance over the Vermont senator's. Clinton and Sanders both support background checks, but the former secretary of state is the one who would go a step further. Clinton has made it clear she would support legislation that would allow victims' families to sue gun manufacturers while Sanders would not support that legislation.

Campaign finance has been a sticking point for many Sanders supporters. To many of them, Clinton appears to be tied to Wall Street money, and she has certainly accepted big corporate-linked donations to her campaigns over the years. However, when it comes to their stated positions, both have vowed to overturn the Supreme Court's Citizens United decision. In fact, in June, Clinton vowed to introduce a Constitutional amendment that "allow Americans to establish common sense rules to protect against the undue influence of billionaires and special interests and to restore the role of average voters in elections," according to a campaign spokesman.

If these six (of the many) reasons one could argue Sanders supporters should vote for Clinton aren't convincing enough, also remember the words of Sarah Silverman:

And the last thing both candidates agree on? That Clinton should be voted president in November.