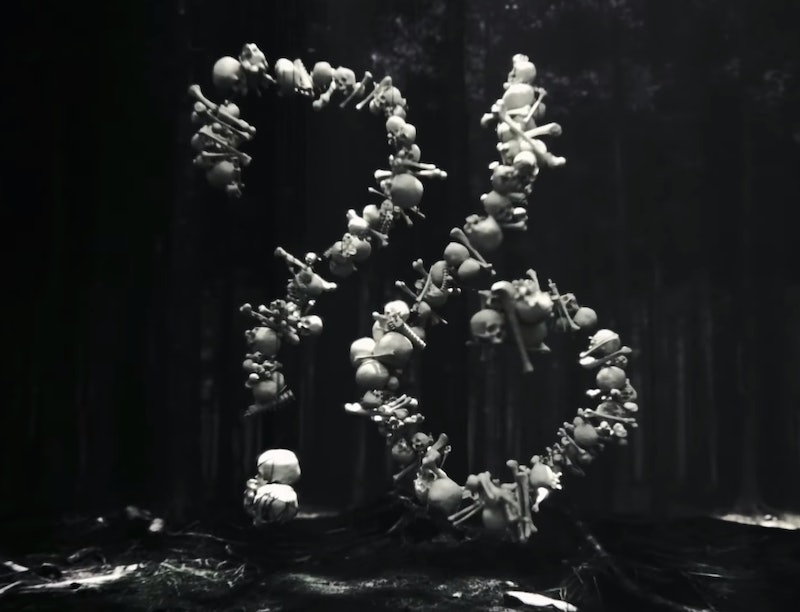 When the words, "The following story is inspired by true events" first popped onto the screen during the American Horror Story Season 6 premiere, you might have been inclined to believe Ryan Murphy and crew. But while the theme was revealed — My Roanoke Nightmare — the premise is actually about Shelby and Matt, a perfect couple who are living in modern times. So although what happened historically in Roanoke is a true story, this dramatic retelling of Matt and Shelby's experiences might not be so real. Bustle reached out to FX for confirmation on how much of Season 6 is real, but the network had no comment.

American Horror Story series regular Lily Rabe plays the "real" Shelby while the queen of AHS herself, Sarah Paulson, portrays the dramatic reenactment version of Shelby. That's because the season is set up like a true crime show, with interviews from the people who lived the experience giving on-camera interviews and then actors recreating those life events. In this case though, it's all fake, with actors portraying both the people in the interviews and the people in the reenactments.

With true crime stories being all the rage now, I can see why Murphy decided to go in this direction of having people retell their scary experiences — even if it has the hokey (but lovable!) vibe of an episode of Unsolved Mysteries. Plus, it gives the American Horror Story mastermind the opportunity to use double the number of stars since you need actors to portray both the "real" people and the actors in the reenactment. So it's a tongue-in-cheek reference to those types of true crime series.

As for the real Roanoke, although Shelby and Matt are living in the present, the Roanoke, North Carolina colony from the 1500s is a frightening real story that has never been solved. English settlers established the colony and when they ran out of supplies, the leader John White returned to England. He was delayed in returning by three years due to a war and when he returned to Roanoke, none of the over 100 original colonists were to be found and this mystery of the disappearing colony still intrigues people to this day.

Since Shelby and Matt left Los Angeles to move to North Carolina, it seems like they could possibly be haunted by those colonists. But when it comes to their story of them being terrorized in hot tubs and with raining teeth, I wouldn't get too concerned since that appears to be something directly from the mind of Murphy.