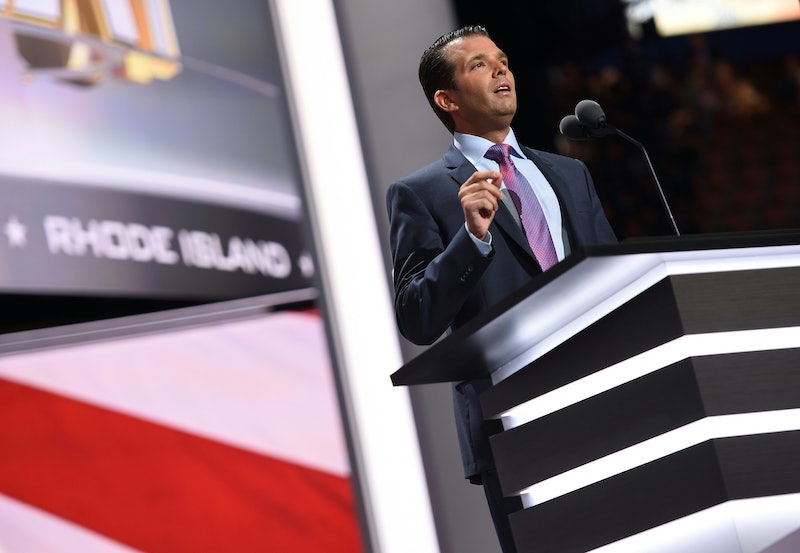 Donald Trump still has not released his tax returns, breaking with a tradition for presidential nominees that goes back more than 40 years. We all know this, and we all know the excuse he has given since February — Trump claims he won't release his tax returns because he is being auditted by the IRS. But ulterior motives may finally have been revealed by a member of the Trump campaign.

When the Pittsburgh Tribune-Review interviewed Trump's son, Donald Jr., he offered a different explanation for his father's refusal to release his tax returns. An article published Wednesday quoted Donald Trump Jr. as saying:

Because he's got a 12,000-page tax return that would create … financial auditors out of every person in the country asking questions that would detract from (his father's) main message.

This reason doesn't seem far off the suspicion among many of Trump's most vocal critics that Trump isn't releasing his tax returns for fear of the fallout from some of the financial entanglements he has. Others have wondered whether Trump's tax return secrecy is related to an effort to obscure having a lower income or net worth than he frequently claims.

Trump Jr.'s comments are not the first time someone in the middle of the Trump operation has lacked message discipline on the matter of tax returns. Trump's own running mate, Gov. Mike Pence, released his tax returns even as the campaign claimed they aren't necessary from the presidential nominee. Before she was Trump's campaign manager. Kellyanne Conway actually said back in April that Trump should release his tax returns. She told CNN's Don Lemon said of the then Ted Cruz-John Kasich alliance, "It's completely transparent," but noted, "Donald Trump's tax returns aren't, I would like to see those be transparent."

There is real reason to believe that Trump Jr.'s assertion is correct, and Trump's tax returns could lead to weeks of stories focused on Trump's financial dealings rather than the message to voters his campaign has been trying to focus on. David Fahrenthold of the Washington Post has been reporting a series of pieces on Trump's lack of donations to his own foundation and seeming aversion to charitable giving overall. But Fahrenthold can't make his claims as strongly about Trump's actual giving without any concrete proof of his financials.

Tax lawyers have argued that the IRS allows Trump to release his tax returns under audit, anyway. And considering Trump's admitted distaste for disclosing bad information about himself, it's not surprising that the Clinton campaign is jumping on his lack of disclosure as hiding something sinister:

Maybe the period of what the Wall Street Journal's Doug Heye called, "unusual restraint," we've seen from the Trump campaign has come to a close.