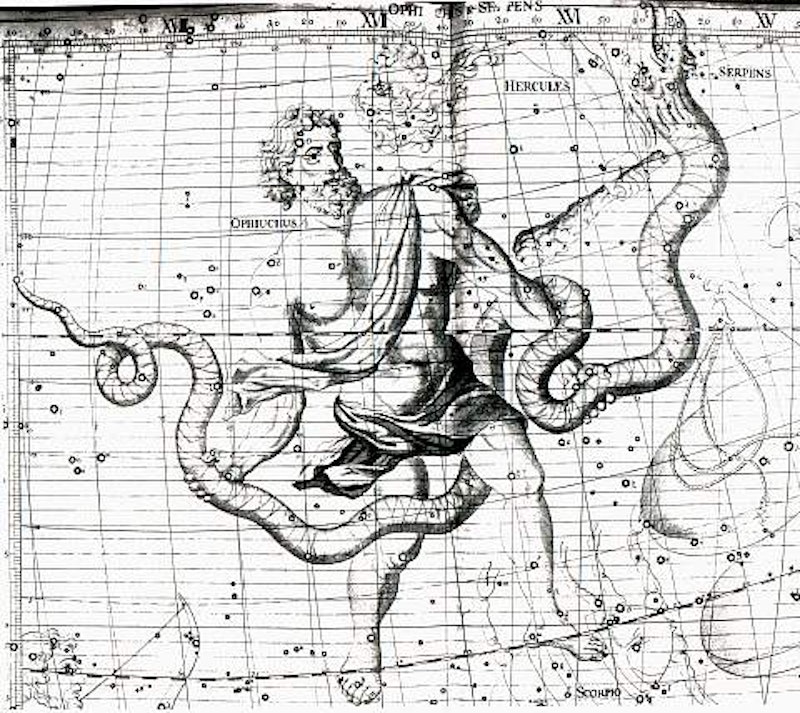 You may have seen some stories trending in the last couple of days proclaiming that the astrological calendar is wrong and that there is a new, 13th astrological sign. If you ascribe to astrology, you may be asking, “Is everything I know wrong? Have I been some other sign this whole time? What is reality??” Take a deep, soothing breath and read on. It turns out that this news isn’t all that new, after all. Here’s the deal:

As far as I can tell, the idea that there is a 13th sign first went viral back in 2011. Five years ago, Parke Kunkle, an astronomy professor at Minneapolis Community and Technical College and a member of the board of directors of the Minnesota Planetarium Society, told the Star Tribune that, due to a process known as “precession,” the Earth’s position in relation to the sun has changed since the Babylonians developed the zodiac thousands of years ago. With the stars and Earth in their current position, he explained, the dates typically associated with the astrological calendar are off by about a month. (You can see the new set of dates from the Minnesota Planetarium Society here.) Bizarrely, the whole issue came up again a few days ago because of a NASA blog post aimed at children that explains why astronomy and astrology are not the same. That post points out that the 3,000 year-old astrological calendar no longer conforms to the present-day positions of constellations, and mentions a 13th constellation that the ancient Babylonians left out. Some people then took that to mean that NASA had officially changed the zodiac. (It didn't).

Many people were shocked both in 2011 and 2016 to realize that their signs had suddenly changed. (According to the new dates, for example, I’ve switched from Gemini to Taurus). Some were even more distressed to discover that their new sign was something they had never heard of: Ophiuchus, the 13th sign, snuggled in between Scorpio and Sagittarius.

Ophiuchus (pronounced “O-fee-yu-kus”) is a big constellation that lies along the ecliptic, aka the path that the sun travels. The twelve signs of the zodiac are roughly associated with twelve constellations that, long ago, ran along this pathway. “Ophiuchus” means “serpent bearer” in Greek and is usually represented by an image of a man holding a snake. It’s not clear exactly what personality traits would be associated with Ophiuchus as a zodiac sign, but according to a 2011 Time article,

Ophiuchus is considered a healer of men and a doctor of medicine or science. He seeks higher education and enlightenment. He is expected to achieve a high position in life. … [H]e is an interpreter of dreams and vivid premonitions. He is envied by his peers and favored by his father and authority figures.

So do you need to rethink everything you believe about astrology (if, indeed, astrology is something you believe in)? Maybe not. Both scientists and astrologers seem skeptical about the change. Although Kunkle was attributed with the demand that the zodiac calendar change, it turns out that he doesn’t really care too much about it because he doesn’t actually ascribe to astrology. An interview with io9 seems to suggest that Kunkle never intended to revolutionize the field. He said of the constellation, Ophiuchus, “I just mentioned that it's there [when talking to the Star Tribune], and astronomers actually count it... So if you actually watch the stars in the background of the sun, it actually does go through the constellation of Ophiuchus.” He added that “Babylonians probably had totally different constellations anyway.” Last week NASA spokesperson Dwayne Brown assured Gizmodo, “We didn’t change any Zodiac signs, we just did the math.”

Many astrologers have written about why the shifting position of the Earth does not affect astrology as it is practiced today. Astrologist Jeff Jawer told the Daily Horoscope, “There is no truth in this. Western astrologers use the Tropical Zodiac, which is based on the seasons, not the signs.” In a recent article, Carmen Di Luccio also emphasized that the Tropical Zodiac is not based on the position of the stars. Di Luccio admitted that, when astrology was being developed 2,000 years ago, “constellations resembling zodiac signs were more roughly ‘aligned’ with the zodiac we are still using today,” but argued that the current zodiac is not contingent on constellations or their position.

And there you have it. If you want to stick with your usual sign and the traditional zodiac calendar, go for it! If you prefer the sign you get with the new calendar, or you feel like Ophiuchus is the sign you were always meant to have, hold on tight and never let it go! And if you don’t really believe in any of this stuff, that’s fine, too.