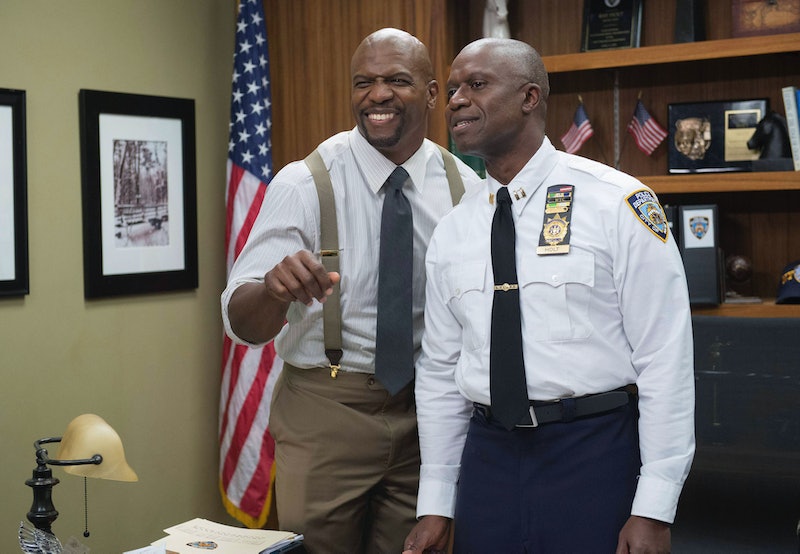 The season finale of comedy darling Brooklyn Nine-Nine is sadly upon us, set to air Tuesday night at 9:30ET. And, based on the Andy Samberg-led series' Season 2 renewal, you'll be watching its first season bow tonight, just like you've watched every episode during Brooklyn Nine-Nine's freshman year on air. (I even watch it live, which, in this day and age, is like pulling out your flip phone to personally call a pizza place, order, and give a cash tip.) But there's more to celebrate than the sitcom's successful first season: Part of Fox's hip Tuesday night lineup, Brooklyn Nine-Nine took home two surprise wins at the 2014 Golden Globes, including Best Musical or Comedy Series, and earned a prime post-Super Bowl spot in February. Oh, and then there's the really impressive thing about Brooklyn Nine-Nine (and, yes, there is something more impressive than surprise critical success): How many other shows feature an interracial gay marriage between an NYPD police captain and a Classics professor at Columbia as just a minor side-storyline? NBD.

What began as a show with a fairly textbook-diverse cast — four people of color, two female detectives, one gay police captain — has grown into a series that spends 24 minutes peeling off its surprisingly complex characters' layers and relationships with one another. It’s a quiet little thrill to watch as these characters are informed by the personality traits that make them different, rather than having their race, or gender, or sexual orientation define their entire character. And, again, it's also really, really funny.

Perhaps the most impressive thing about Brooklyn Nine-Nine is just how many stereotypical sitcom tropes there are available to lazily shape its ensemble, and how subtly the writers subvert them with a heavy dose of realism. The employees of Brooklyn’s 99th Precinct — and the talented writers who pen them — manage to avoid the following:

Sergeant Terry Jeffords loves farmer’s markets. Sgt. Terry Jeffords likes foreign films, impressionist art, and he can’t sleep without his whale songs. He’s also built like a house. Terry Crews, the actor, could yell all the time, smack Jake on the back of the head and pop the veins out in his neck, and it would be funny, sure. But the fact that most of his emotions — fear, pride, bravery, and yes, anger — are built on the desire to stay safe for his wife and daughters, and an intense devotion to supporting his team of detectives, makes his highs and lows so much funnier than anger alone. And damn, is he funny.

The women on this show! The women on this show are so great! Rosa (Stephanie Beatriz) and Santiago (Melissa Fumero) are phenomenally different, excluding the fact that they both happen to be Latina detectives. Santiago is a hyper-confident, has a short fuse, and throws wads of cash at printers after she destroys them. Santiago is, in her own words, “too competitive, prone to jealousy, a bit of a killjoy,” but she’s also extremely competent and caring. Rosa and Santiago could hardly be more different in their approaches to detective work, but they know they work in a male dominated world, and rather than competing against each other, they commit to having each other’s backs. And they even keep an eye on Gina when she needs it, like when her house is broken into. Ladies helping ladies! Ladies being leaders! LADIES!

Not since early Tom Haverford have I looked so forward to what nonsense will come out of a TV character’s mouth. Most of the nuggets that Gina (Chelsea Peretti) chooses to dole out seem certifiably insane. (“At any given moment I’m thinking about one thing: Richard Dreyfus, hunkered over, eating dog food.") And even though it’s not immediately clear to the audience, Captain Holt sees potential in her from the first episode. As the season has worn on, Gina hasn’t revealed herself to be any less eccentric, but her character has been allowed to grow and become more than just straight comic relief. She’s extremely financially responsible, she has a remarkable understanding of every other person in the office, and she cares about people, particularly Jake and Captain Holt, even if she mostly shows it by calling them variants of “Little Mermaid.” You can’t put a pin in Gina, but you can’t just disregard her as crazy either.

Oh, hell yes they can. Although Brooklyn Nine-Nine’s lead is technically Samberg's Jake Peralta, almost all of his storylines revolve still around building the ensemble characters, and nowhere can that be seen more clearly than his relationships with the three women in the office. He’s not sidelined to only interacting with Santiago, who he has buried feelings for, but also Rosa and Gina, who have been revealed as two of his closest friends. Jake and Gina grew up together and look to each other for emotional support, whereas Jake and Rosa are competitive in the workplace, but also trust each other as colleagues who went through the Police Academy together. The writers build in little bits of information about these characters flawlessly, so that the forehead kiss from the beginning of the season made so much more sense once we realized Gina and Jake were practically raised as family. Also, they made so much more sense as people. All hail the character development!

Charles Boyle (Joe Lo Truglio) is not unlucky in love with Rosa because he’s a Nice Guy. And he certainly is a very nice guy. He’s also creepy and overbearing with Rosa, you know — smelling her hair, staring at her from point blank range. Does Boyle blame that she only wants to be friend with him on the fact the women just don't go for nice guys? No, he eventually backs off and apologizes that he probably made it uncomfortable for her to be around him. The relationship doesn’t magically fix itself, and there are still awkward moments, like him not inviting her to his wedding and her being hurt as his friend; but the reality is, their friendship is most important to both of them.

Coming over from mostly dramas, it is unreal how every single thing Andre Braugher says can get a laugh as Captain Holt. The fact that he’s gay is a topic of conversation for about two seconds in the first episode, and then it goes back to just being something about him. But it is something important about him that has informed so much of his career in the NYPD. The writers don’t shy away from depicting how being an openly gay detective in the 1980s would have made Holt the Captain he is today (and even how it would have affected his husband’s view of police officers). And the man he is, and the character he is, are so much the better for it. After all, even Holt is not immune to Kwazy Kupcakes.

More like this
Adele’s All-Female Lineup Includes Kacey Musgraves, Mahalia, & Self Esteem
By Shahed Ezaydi
Why Simone Ashley Had To Study Snails For Intimacy Training, Pre-‘Bridgerton’
By Grace Wehniainen
At 14, Kate Berlant Had A Wheelie Backpack & One Line In 'Lizzie McGuire'
By Samantha Rollins
James Marsden Kept Teddy’s Westworld Season 4 Return A Secret “For Years”
By Brad Witter
Get Even More From Bustle — Sign Up For The Newsletter