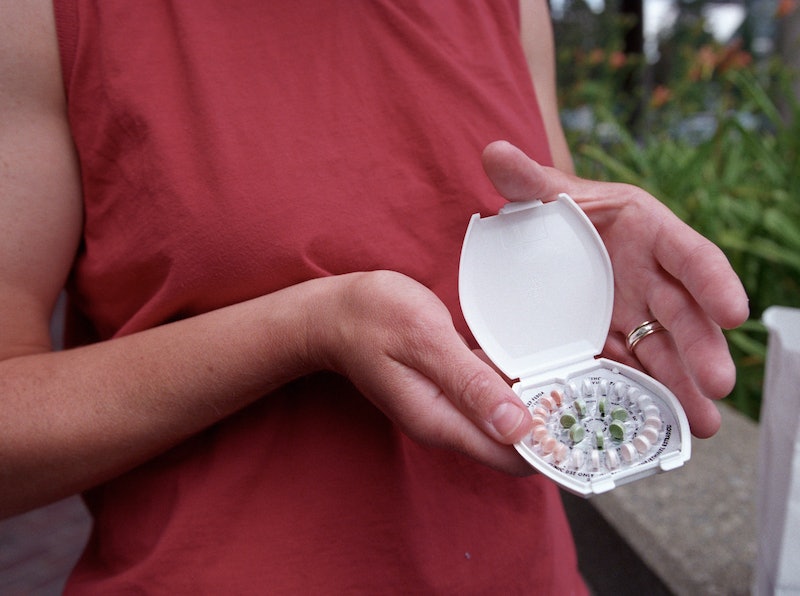 When I first heard that Republican nominee Donald Trump was backing over-the-counter birth control, I was surprised and a little bit thrilled. Supporting women's access to birth control without a prescription is a downright moderate move for a man who is pro-life, vocally opposed to Roe v. Wade , and has said he wouldn't fund Planned Parenthood if they offered abortion services. But my initial excitement wore off fast and soon I was left with a few concerns and a whole lot of questions about how Trump's over-the-counter birth control would work, and how it might actually negatively impact women's access to birth control.

While advocating for women may be a role we're unfamiliar seeing Trump take on, he's hit the nail on the head when it comes to access to birth control. For many women, obtaining birth control is costly and time-consuming, for some — those without insurance, those on a limited income, or those who work hourly and miss out on wages when they take time off for doctor visits — it's simply unaffordable. But is Trump's prescription-free birth control proposal the answer?

While I'm all for increasing women's access to affordable birth control, I had some questions about how Trump would move to make birth control prescription-free.

1. Would over-the-counter birth control cost me more out of pocket?

While the American College of Obstetricians and Gynecologists (ACOG) has long called for birth control to be made available over the counter, they've been vocal critics of previous Republican efforts to make birth control obtainable over the counter. For example, when Sen. Kelly Ayotte introduced the Allowing Greater Access to Safe and Effective Contraception Act in 2015 the ACOG (and the Planned Parenthood Action Fund) opposed it on the grounds that it would actually make hormonal birth control pills more expensive for women because insurance companies would no longer be required to cover their cost.

"Unfortunately, instead of improving access, this bill would actually make more women have to pay for their birth control, and for some women, the cost would be prohibitive," ACOG President Mark S. DeFrancesco, M.D. said in a statement. "We would welcome any legislation that would do what this proposal purports to do — help women. As it stands, however, we cannot support a plan that creates one route to access at the expense of another, more helpful route."

It's a long-held misconception that birth control is affordable. A 2012 study by the Center for American Progress found birth control's high cost to be one of the biggest hurdles impeding women's access with both oral contraceptives and the patch alone costing roughly $1,200 annually without insurance. So, while Trump's aim may be to make birth control more accessible, he could potentially discourage some women from using it should insurance providers no longer cover the cost.

2. Would there be restrictions on who could buy it?

The ACOG found Sen. Ayotte's proposal for over-the-counter birth control problematic for another reason: it restricted access to those 18 and older. While making birth control accessible to teens is a controversial topic, it's important their access to contraception not be cut off as they face a high risk of unintended pregnancy and a unique set of challenges when it comes to talking about and obtaining birth control.

According to the Center for Disease Control and Prevention, teen birth rates have been dropping — the latest numbers show a drop of 9 percent from 2013 to 2014. However, the rate of teen births in the United States is still higher than rates seen in other western industrialized nations, meaning there's still room for improvement.

3. What would prescription-free self-administered hormonal birth control mean for an IUD-user like me?

This is a tricky one in that it remains largely uncharted territory. States like Oregon and California which have moved to allow pharmacists to prescribe self-administered birth control like the pill, the patch, and the ring still send women like me, who opt for implants and intrauterine devices, or IUDs, to the doctor's office for consultation and insertion. It makes sense as I wouldn't want to replace my own IUD or have it done by a pharmacist. But if self-administered birth control moves over the counter and falls from the scope of what insurance companies will cover, will long-acting reversible contraceptives be dropped as well?

The fact of the matter is that while "it should not be done by prescription" sounds great, it's the details of Trump's would be prescription-free birth control proposal we need to be cautious of. Unfortunately, there aren't a lot of answers at this point in time as to how Trump would move birth control over the counter because the Republican nominee didn't go into details regarding the role of insurance companies or age requirements. Until he does, I'll refrain from celebrating.