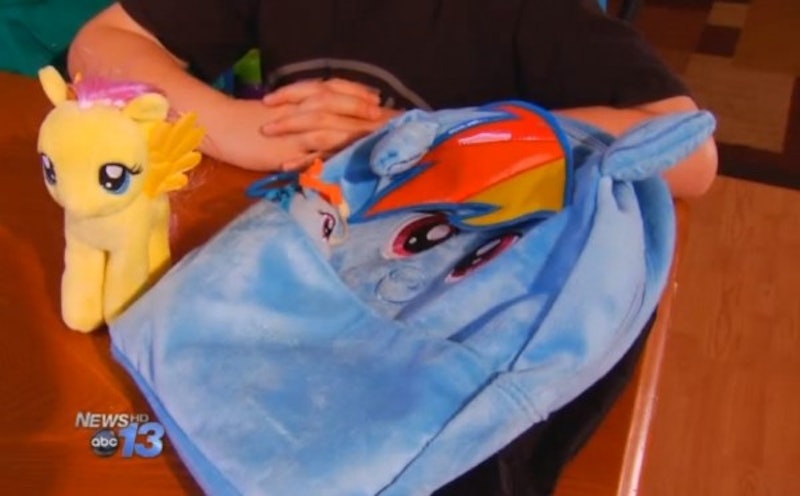 Nine-year-old Grayson Bruce loves the TV series My Little Pony: Friendship Is Magic. I am totally with him on this, because it is hilarious, and amazing, and far better than I think anyone really thought it was going to be. But for some reason, while it is accepted that a 29-year-old woman might like a kid’s show as a sign of endearing eccentricity, it’s unacceptable for a nine-year-old boy to like it, too. This is nuts. But you know what’s even more nuts? The fact that his Asheville, North Carolina school doesn’t seem to care about the fact that he’s getting bullied because of his love of the show.

Grayson’s lunch bag looks like the pony called Rainbow Dash. He loves it, but he’s been getting beaten up at school for carrying it around. Sucks, right? You’d think a school would want to protect their students and stop the bullying in its tracks — but when this particular school was faced with this situation, they didn’t deal with the bullies. Instead, they called up his Grayson’s mother, Noreen Bruce, and told her that they were banning her son’s lunch bag because it was “a distraction.”

It’s (sadly) become not at all uncommon for schools to wash their hands of cyberbullying; the argument tends to be, “Well, it didn’t happen on school property, so there’s nothing we can do about it.” But you’d think that when they’ve got an old-fashioned, let’s-gang-up-on-the-different-kid case of bullying going on right under their noses, they’d deal with it head on, right? Unfortunately not. By banning the lunch bag, rather than dealing with the bullying, they’ve taken the easy way out. Doing the easy thing instead of the right thing is never a good move — but it’s even worse when the well-being of a nine-year-old kid depends on it.

Elementary schools are supposed to teach kids people skills, friendship, and compassion — exactly the lessons My Little Pony focuses on — as much as they’re supposed to teach them how to read, write, and do math. By simply banning the lunch box, they’ve missed out on a teaching opportunity. “Saying a lunchbox is a trigger for bullying is like saying a short skirt is a trigger for rape,” Noreen Bruce told Ashville’s ABC News 13. “It’s flawed logic; it doesn’t make any sense.” And she’s absolutely right. By teaching kids this lesson instead of the right ones — treat others the way you would want to be treated, being “different” isn't “bad,” everyone is allowed to have their own likes and interests even if you don’t agree with them, and so on — it’s doing everyone a disservice.

I can only hope that the media attention the story has been getting will prompt the school to realize they’re in the wrong and change their tune. Because really, guys. WTF?

More like this
'Breaking Bad' Duo Walt & Jesse Are Back — In This Super Bowl Commercial
By Jake Viswanath
Kim Kardashian’s Son Saint Had This Unique Request From The Tooth Fairy
By Alyssa Lapid
These Artists Are Reimagining Black History Month To Create A Better Future
By Katie Mitchell
These 4 Zodiac Signs Make The Best Bridesmaids
By Nina Kahn
Get Even More From Bustle — Sign Up For The Newsletter
From hair trends to relationship advice, our daily newsletter has everything you need to sound like a person who’s on TikTok, even if you aren’t.