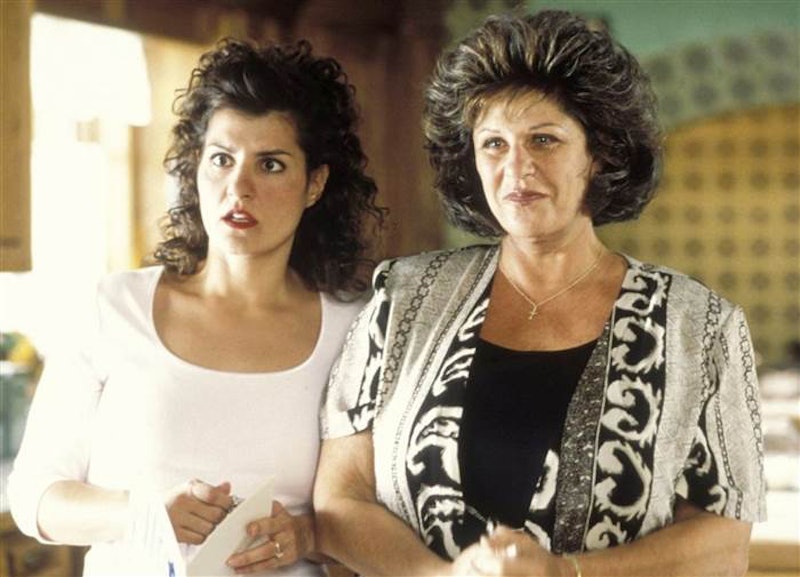 As awesome as moms can be, they often also have a talent for making you feel like you want to rip your hair out when they ask a seemingly simple question. Mothers like to think they know what's best for us (and let's face it, sometimes they do know what's best), so they spend a lot of time trying to guide us along the path of adulthood. I suppose you can't blame them that much; after all, they did spend nearly 18 years of our lives pretty much being in charge and bossing us around. It's got to be a big adjustment for them to see us out and about on our own.

However, even if you thoroughly enjoy the life guidance your mom gives you, you can still probably agree that moms are particularly good at guilting us. Even if they don't mean to, they are easily able to make us feel guilty about all kinds of life choices, whether it's the specific shade of blush we put on in the morning or whether we want to have children. It never ceases to bother us, too, and that's because guilt is a shitty feeling. Keep in mind, however, that the guilt your mom puts on you isn't necessarily yours. F. Diane Barth, a licensed psychotherapist and psychoanalyst practicing in New York, writes for Psychology Today about why your mom slaps the guilt trip on you so often: "Some of her behavior may be driven by her own unrecognized and unresolved feelings of guilt," she says.

This isn't to say our mothers' feelings are invalid, or that any criticism or concern they ever throw our way should be dismissed as a guilt trip. But it is important to remember that you haven't necessarily done something wrong when you get guilted. Moms sometimes just have a hard time expressing their own emotions, and the next best thing may be to make you feel bad about anything and everything.

Here are seven unfair ways your mom is guilting you.

1. She Sends You Passive Aggressive Texts When You Don't Call Back

Generally, a mom's greatest dream is to be in constant communication with her daughter. She wants to know what's going on in your life so she can figure out if you're happy and healthy, and if she needs to ship you some homemade spaghetti. Naturally, a lot of mothers get triggered when their daughter doesn't get back to them right away. They start to imagine that something awful has happened, or that we don't want them in our lives anymore — and there's nothing more hurtful than that.

Unfortunately, guilt-inducing actions like passive aggressive messages about not picking up the phone won't make us want to call them and update them on what's been happening in our lives. If this keeps happening over and over again, speak to your mom and tell her that you don't appreciate that kind of communication. As much as you'd like to talk to her every single day, that probably won't happen because of how busy you are — but that doesn't mean you don't love her.

2. She Keeps Asking When You're Having Kids — When You've Already Said You Don't Want Kids

Our parents' generation is a more old school than we are, so to most of them, having kids is just a life stage that everyone eventually arrives at. If your mom falls into this category, she may have a hard time accepting the fact that you don't want little kiddies running around anytime soon. She might even think it's a temporary decision that you'll grow out of when you reach a certain age.

Regardless of what Mother thinks, she should never guilt you into rethinking your decision about children. She doesn't have to agree with your choice, but she does have to respect whatever you choose, and part of being respectful is refraining from the invasive comments that outwardly display her opposing opinion.

3. She Persistently Tries To Get You To Honor Certain Family Traditions

Parents love to see things passed down from generation to generation. Most of the stuff they give us, like their wedding jewelry, is both sentimental and special to us, but there are some other things that we'd rather keep in the past. For example, my family has some religious holiday traditions they've maintained for ages, but I chose to shed them because I don't agree with the foundations they come from.

There are probably some traditions in your family that you feel the same about, but when you broke it to your mom that you wouldn't be upholding them, she took offense. Hopefully you let her down gently and understood why she might be a little saddened by it. However, that doesn't mean you have to put up with her trying to make you feel bad about it. If you just can't take the guilting anymore, stand up for yourself and let her know that enough is enough.

4. She Makes You Feel Bad For Keeping In Touch With Family Members She Doesn't Speak To Anymore

It's inevitable for there to be some kind of falling out amongst family members. What good is kin without some drama? But just because your mom is in the middle of a spat with your cousin doesn't mean you should also give her the cold shoulder. If you find yourself in this situation, don't let mommy dearest guilt you into getting involved. She may want someone on her team, but it's best to not take sides when a family spectacle arises.

5. She Complains All The Time About How Far Away You Live

She may try to play it off as harmless joking, but if your mom is constantly digging at you about how far away you live from home, she's trying to send a message. Barth says the end game of this kind of guilt trip is to get the other person to do what you want them to do. In other words, even if your mom can't articulate this to herself, the more she guilts you for living across the country, the more she's trying to get you to move closer to where she lives.

As sweet as what she's aiming for is (she just wants to live together as a happy family again!), there comes a time when your mom has to simply come to terms with the fact that you don't live near each other anymore, and that's no reflection on how much you care about her.

6. She Makes You Feel Bad About The Career You Chose

Maybe you chose the less beaten path when it comes to your career because you wanted something different for yourself than what your family dreamed for you. First of all, good on you for making that tough choice. Second of all, don't ever let your mom make you feel guilty for this decision. Years could go by and she still won't understand why you gave up the job of a corporate attorney for something more low key, but that doesn't give her the right to make you feel bad about it.

7. She Makes Snide Comments About The Way You're Raising Your Kids

If you did choose to have kids, there's a high likelihood that your mom has offered parenting advice. Lisa Brateman, a licensed clinical social worker and family therapist in New York, tells the Wall Street Journal that mothers will often criticize the way their daughters go about their personal lives — not because they necessarily think what they're doing is wrong, but because their only way to express their suppressed affection is by being passive aggressive.

Regardless of what she's feeling, it's not fair for your mom to guilt you into raising your children a certain way — or guilt you about anything else. It's fine for moms to offer advice and they can lend a helping hand, but it's a very different story if they're trying to meddle in your life. Be loving but firm, and let them know that you can sail through adulthood just fine on your own.