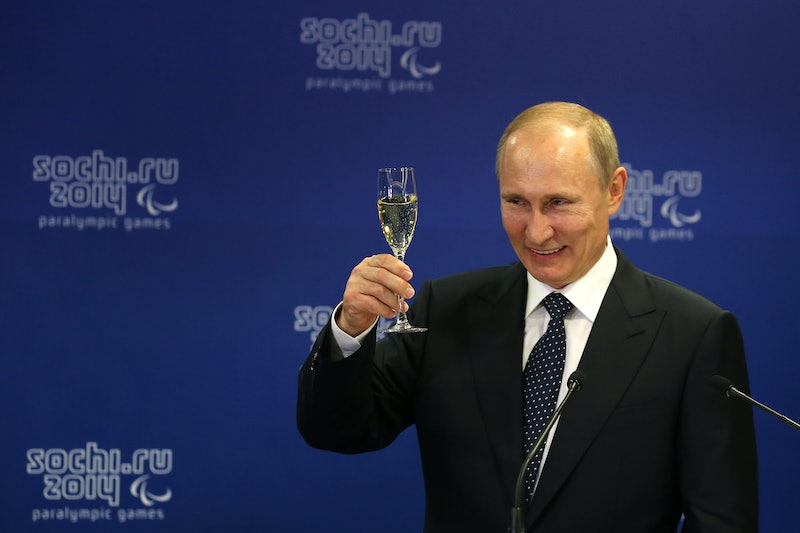 On Tuesday, Joe Biden had stern words for Russian President Vladimir Putin, who just signed a treaty to annex Crimea. Biden labeled Putin's push into Crimea a "land grab", one that'll potentially cut off Russia from most of the international community. Biden, speaking from Poland, promised stepped-up American support for Eastern European nations, and reaffirmed his support for White House sanctions against Russians. Which begs the question: Why exactly does Putin want Crimea so badly?

It's hard to believe that just last month, Russia was hosting the 2014 Sochi Olympics — the prime example of international cooperation and peace — a event largely championed by Putin himself. After Ukrainian President Viktor Yanukovych was ousted from power almost immediately afterward, Putin claimed that he had no interest in taking over Ukraine's Crimea region.

Now, after a referendum Sunday saw Crimea vote in favor of joining the Federation, its citizens seem overwhelmingly happy at the prospect of being part of Russia again — at least, those who are willing to speak to the media about it. But there's much confusion as Crimea scrambles to erase its Ukrainian past: There have been few discussions about how laws, education, energy, and banks will be changed by the 2015 integration deadline.

So far, Putin has spent tons of Russian money on the Olympics and Crimea invasion; caused the Russian stock market to drop precipitously; and seriously hurt his international standing. So what's really behind Putin's push for Crimea?

During his address on Crimea, Putin says the region "in the people's heart of hearts" has "always been part of Russia." Nice touch. But let's face it, Russia doesn't seem to care about injustices against its own people — hello, the crackdown on the Russian LGBT community, anyone?

What Putin neglected to mention is that Crimea is rich in natural resources like oil and gas. Russia is looking for new ways to supplant its dwindling Siberian energy reserves. If Russia claims Crimea, then any energy resources found there will be under Russian rule, a tantalizing option for Putin to have in his pocket.

Energy firms such as ExxonMobil, Chevron, Shell, Repsol, and Petrochina have begun to show real interest in working with Kiev to explore the area. Energy companies have already found interesting deposits in Russia’s Black Sea zone, near Novorossiysk, and in Romanian zones. Trans Euro Energy has even found commercially viable natural gas reserves under the Crimean mainland.

As EUobserver notes, if things continue to go sour with the West, Putin can use the money and resources to go on a "new charm offensive" with the West, because no one wants to go to war.

Before Putin got involved, Crimea was considered a hidden tourist location, thanks to its seaside cliffs and summer mansions. Over the past few weeks, with unmarked Russian troops rolling in, the region became host to a far different landscape indeed.

Putin and Russian officials are scared, Andrey Zubov, a professor at the Moscow State Institute of International Relations, told the Financial Times. They watched Ukraine's protest movement with trepidation, trying to turn the Russian people against the so-called Ukrainian "fascists."

First, Moscow’s rulers are terrified that Ukraine’s Maidan protest movement could replicate itself in Russia. The fate of Viktor Yanukovich, the ousted Ukrainian president, frightens them. They are also frightened by the tough anti-communist spirit of the Maidan. The revolution is taking place amid collapsing monuments to Soviet leaders: Lenin, Kirov, Dzerzhinsky.

This is a man who has at least two shirtless photos of himself on his "personal website." He obviously wants to exude himself as a power player at all times.

In his address after announcing the future annexation of Crimea, Putin also mentioned that the break-up of the former Soviet Union was a "historical injustice" that caused "traumatic effects" for its citizens. He also took a stab at the international community, namely the U.S., for being hypocritical in criticizing Russia for breaking international laws for invading a country (cough, Iraq, cough.)

For now, it remains to be seen if Putin will just be satisfied with Crimea, or if he plans to keep moving into Ukraine.

Of course, the big interests of Russia’s rulers in Ukraine, their personal economic interests, weigh heavily. But even more important is the belief that, in the countries of the former Soviet Union, it is Moscow that must define the rules of the game. Ukraine, like Poland in 1981, Czechoslovakia in 1968 and Hungary in 1956, rose up against this principle of limited sovereignty. And the Russians want to bring Ukraine to heel, just as they did with its western neighbours.