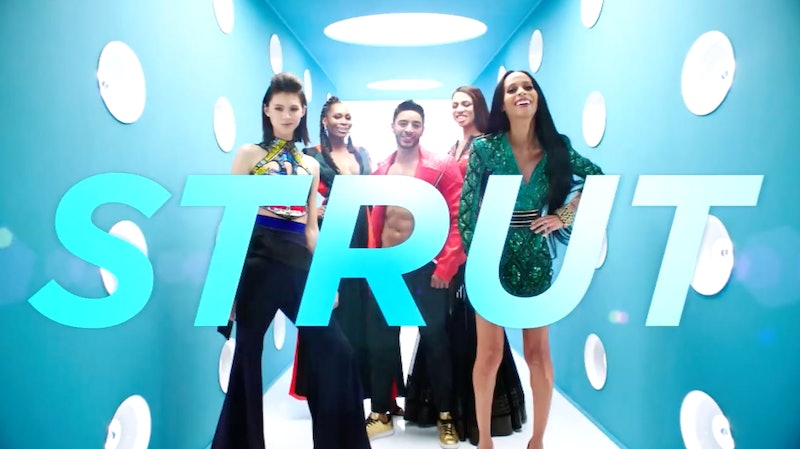 Thanks to models like Hari Nef and Andreja Pejic, we're finally beginning to see a lot more trans faces in fashion and on the runway. But thanks to Oxygen's new show Strut , which premiered on Tuesday, Sept. 20, we've been introduced to the first all-transgender modeling agency, Slay, which is founded and run by Cecilio Asuncion. To any trans or gender nonconforming fashion lover, this inside look at the world of being trans in modeling is a dream come true.

Though visibility has been amping up considerably these days for those who don't necessarily adhere to the gender binary, there's still very little representation of trans people as a whole. So Slay and its models have got a lot of work cut out for them.

Asuncion says Slay is a unique place, since the models do not have to hide who they are or worry about being judged for their gender identity by their coworkers, he believes that there's nothing holding back his models from being as successful as they aim to be. "I always tell Slay applicants and models this: we're a modeling agency first and trans people second. Because if you can be who you are and you put that on the backburner and you just really work on what's right in front of you — the sky's the limit. Own who you are and transcend the labels."

Asuncion started Slay about a year ago out of passion for amplifying trans visibility in the media, work he had already begun in his previous career. "I was a filmmaker prior to opening up the agency, and my first film was a documentary ( What's The T? ) on trans women, which is where my involvement with the trans community started," he tells Bustle in a phone interview. "I really wanted to immerse myself in the trans world because, at that time, gay marriage was being legalized. But there was something in me that said 'what about our trans brothers and sisters?' They can't even use the proper bathrooms."

His interest in fashion combined with his desire to create more opportunities for trans folks drove Asuncion to open Slay. "I've always loved fashion and I thought about all the supermodels out there and I figured why not? If someone can do the job, let them do the job," he tells me. "Because I really do believe that trans is beautiful."

But perhaps the greatest challenge is finding the balance between setting the bar extra high for the Slay models in order to prove themselves as equally talented as their cisgender counterparts, while also challenging gender and beauty standards in the fashion world. This is most exemplified in the show's first episode, where Asuncion has a discussion with Slay model Arisce Wanzer about the possibility of her getting a nose job. These scenes and Wanzer's frustration with the topic certainly begs the question: should Wanzer change or should the cisnormative, racist narrative of fashion world aesthetics change?

According to Asuncion, inclusivity, while a worthwhile goal, doesn't happen overnight. In the meantime, he wants to help the models do their best at succeeding in the fashion industry. "We're not here to change everything, we just want what's fair," he says. "These are the fashion standards that I've inherited. I want to play in the fashion pool and get them the right opportunities. [Arisce getting a nose job] was an important conversation to have, but I would never push someone to do something they don't want."

But regardless of these obstacles and impossible standards, Slay models Wanzer, Laith De La Cruz, Dominique Jackson, Isis King, and Ren Spriggs work to dismantle the cis-leaning bias of this world with their fierce looks and exceptional skill.

If you're a lover of reality TV, you likely recognize the name "Isis King" — and there's definitely a reason for that. Back in 2008, America's Next Top Model was in its tenth cycle, and queer and trans kids across the nation had their eyes glued on King, the first ever trans contestant on the show in a sea of cisgender models. She returned for Cycle 17 for the All-Stars season before taking a step away from public life for a few years.

The transphobic scrutiny she faced while on ANTM from the media and other girls in the house collapsed her confidence a bit regarding her modeling career (and understandably so). So after some public speaking, TV, theatre, film and small modeling gigs, King got signed to Slay and is ready to return to the limelight.

Now that she's taken some time away before returning to TV, she tells Bustle that things are different this time. "I was on TV my whole transition, and since everything was public, I was used to people having opinions on every single aspect," she says. "Once I took time away from the public eye and learned to appreciate and accept myself, things got easier. I was on a journey figuring out 'Who is Isis?' and that is someone who's not going to be influenced by anyone around her so she can become the best person she can be."

With all the growing and opening up she does on Strut this season, the one thing King can't stand is the drama between models, which shows up in the show's first episode. In fact, she sees this kind of pettiness as counterproductive for her personal growth, especially as a representative of the trans community. "Getting in someone's face and throwing drinks is not OK," she says. "I've worked hard to counteract the stereotypes of what trans women are believed to be. For trans women, it's much harder. We have to be 10 times better and 10 times more respectable. I work too hard on my image and on this community to allow stuff like that to taint my work."

Sometimes, though, being the face or the voice of an entire community is tricky and thoroughly exhausting. Both Asuncion and King agree that Slay models are models first, and transgender second. "I wanna prove that no matter if I'm trans or not, I have talent," King sats. "I want to book something based on what I can bring to the table."

Besides getting to see the inner workings of this rad trans-only modeling agency, the show aims to lend greater exposure and visibility to the trans community as a whole, making Strut and Slay yet another small piece of a larger cultural shift towards greater inclusiveness. But let's keep in mind one very important thing: working trans models like King and Wanzer are models first and trans second.