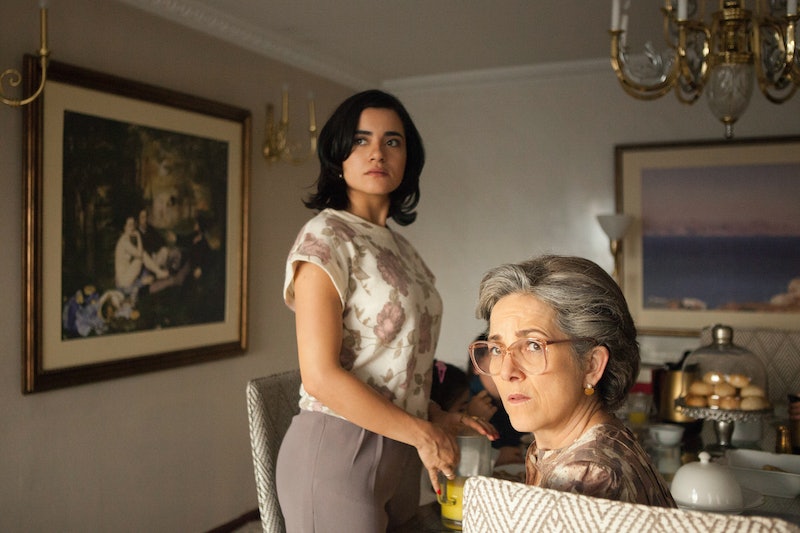 No trope gets me more upset than the "nagging wife" who exists only as an obstacle for the male protagonist, who is no doubt doing something interesting. One of the best things about Narcos Season 2 is that it totally destroys that trope, depicting the wife of Pablo Escobar, Maria Victoria Henao, as deeply conflicted about her loyalty to her husband and her desire to protect herself and her children. And, with such a fascinating conflict onscreen, can you read books about Maria Henao's life to help fill out Narcos' portrayal of the real-life historical figure?

While she's yet to receive her own biography or write one herself, the best way to find out about Maria Henao is to read about Escobar's personal life. Anyone who was in Escobar's inner circle likely was aware of and maybe even close to his wife and his children, whom he was close with until his death. When he married Henao, Escobar was in his early 20s, while Henao was only 15, according to The Mirror. Despite that age and maturity difference, the couple stayed together for years, and Henao stayed by his side until his death put her and their two children in danger of violence. Here are some books that detail her story.

Pablo Escobar: My Father was written, as you can probably guess, by Escobar's son, who relives his memories about the death of his father in very specific detail, including how his mother dealt with the crisis. While Henao comes across as deeply scrupulous, according to this book, she's not really a natural leader, and seems to go from deferring to her husband to, in some ways, deferring to her son.

Covering the life of the drug lord, The Parable of Pablo includes sections on Pablo's life with Henao, including excerpts from the couples' love letters to one another.

The woman who had a passionate affair with Escobar for years might have an interesting perspective on his faithful wife, right? Well, reporter Virginia Vallejo spends most of her book talking about her struggles to survive in the wake of her affair ending and becoming a target of the Cali Cartel, but she does spare the occasional mention of the "plain" woman who was legally linked to the drug lord.

Sins Of My Father by Juan Pablo Escobar

This may not count because it's not a book, it's a documentary, but since some people prefer to listen to their books anyway, I thought this might fit on the list. Since it's another source from the family, it sheds some light on the guilt that plagues Pablo Escobar's son about the murder and cruelty his father caused.

Your eyes aren't playing tricks on you — there's several repeated names on this list. But according to Amazon, Salazar's other book, Pablo Escobar, el Patrón de mal goes into the drug lord's background and his history in order to piece together "his origins and human dimension" and figure out exactly how he became a larger than life figure. That includes some sections about his wife and family.

Escobar, The Inside Story of Pablo Escobar, the World's Most Powerful Criminal by Roberto Escobar

And to close out the list, another work by a family member, called " The Inside Story of Pablo Escobar" by his brother Roberto. This story also shows Henao's devotion to her husband and covers more of their early years and courtship.

While Maria Victoria Henao has been largely reduced to a minor character in her husband's life, her impact can be felt in fictionalized versions of his story, like Narcos, and in the accounts of Pablo Escobar's life chronicled in these books, which you can read to find out a little bit more about the woman who spent her life in the shadow of a huge kingpin.