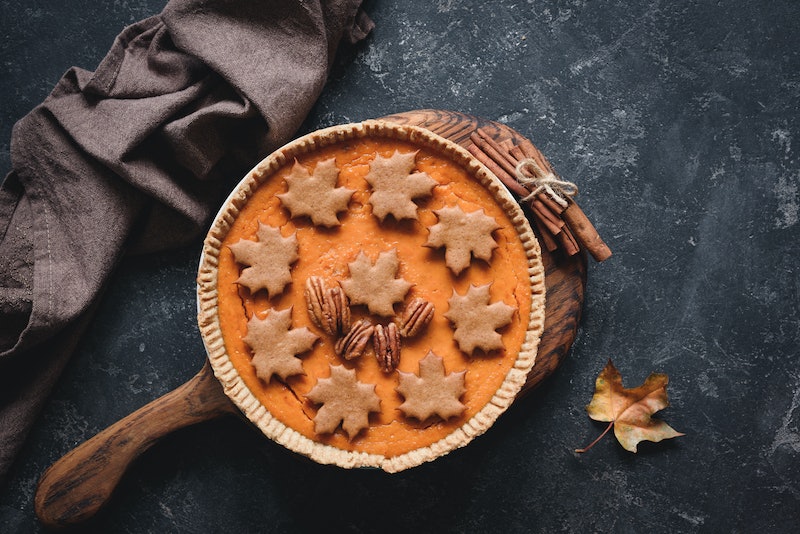 Year after year, many look forward to the return of pumpkin spice everything. But, considering we're all so obsessed with the flavor, it's worth questioning: Why are we all so intensely obsessed with pumpkin-flavored foods?

As fall approaches, we embrace cable-knit sweaters, the crunch of multi-colored leaves beneath our Uggs, and, of course, pumpkin flavors. As a total autumn enthusiast, I don't question that pumpkin is undeniably fall, I just need to know when it became the single most fall thing you could possibly indulge in. After all, this is the season of apple-picking, and plenty of other delicious fruits and vegetables are hitting their peak right now as well. Still, nothing has quite the popular appeal of this hallowed gourd. It's like pumpkin is unofficial mascot of the autumnal equinox.

So, why do we love you so much? As the natural order of logic dictates, it's time to examine this seasonal phenomenon and its psycho-social underpinnings.

It's Not Actually Because Of The Pumpkin

Pumpkin itself doesn't have much of a distinctive taste, does it? With a flavor profile akin to 30 percent the intensity of a boiled carrot, it's not hard to argue pumpkin isn't the aspect of pumpkin spice that we're so in love with. No, it's actually the spice. Always has been, always will be.

The flavors that put the "spice" in "pumpkin spice" are typically a blend of cinnamon, ginger, nutmeg, cloves, and allspice. This time of year, grocery store circulars packed to the brim with pumpkin spice M&Ms, pumpkin spice cheesecake, pumpkin spice air fresheners, and they're all enticing us with the spice, not the pumpkin. Many of these products don't contain even a hint of actual squash!

While we all love the smell of cinnamon and allspice because they give us that warm, fuzzy feeling during the fall, there's also a psychological component to it. Known as "reactance theory," it's basically the theory that we've been conditioned to want products that are only available for a short time versus the ones that will always be around. This could easily be one of the reasons everyone loses their minds when seasonal items are released.

For The 'Gram, Of Course

There's social proof of pumpkin spice's popularity, and it's hard to deny: It's all over social media. This can possibly be at least partially attributed to our basic human need to fit in. Because many are posting photos of their pumpkin-flavored treats on social media, many feel compelled to as well — both to feel like a trendsetter, and also to feel like they fit in.