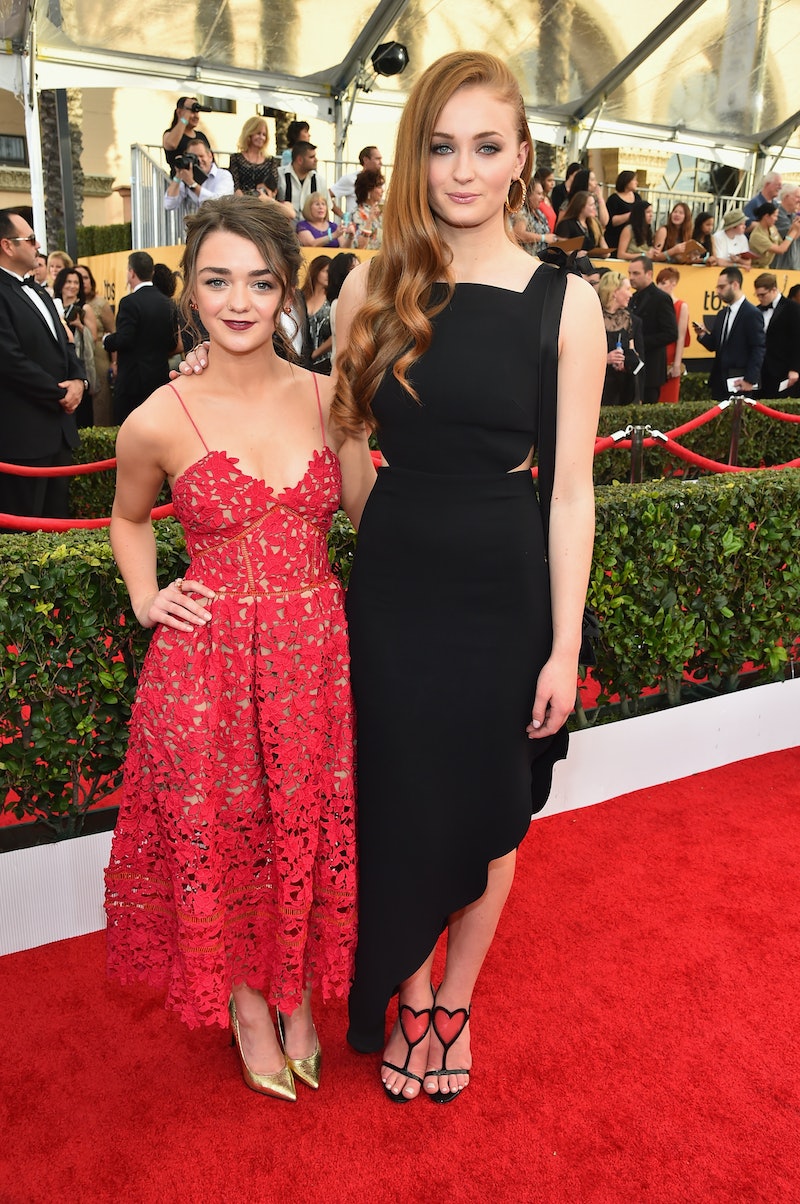 Sansa and Arya Stark may not have started off super close on Game of Thrones, but these young actors are thick as thieves IRL. In fact, they even made the ultimate BFF move: Maisie Williams and Sophie Turner got matching tattoos, proving that though they might not share a ton of screen time, they're definitely the cutest pair of co-star buddies offscreen.

Fans got some sense of the newly minted ink when Turner discussed the tattoos on the 2016 Emmys red carpet and revealed what they were all about. But in addition to seeing the ink itself, many inquiring minds (mine included) wanted to know: Where did Turner and Williams actually acquire their matching ink?

On Sept. 16, Entertainment Weekly reported that Williams and Turner got the matching tattoos. Shortly thereafter, Williams posted a photo on Instagram with the caption, "07.08.09," which some speculated could have revealed a clue to the tattoo mystery.

According to USA Today, Williams and Turner went to a tattoo shop in Belfast and got their tattoos done an artist named Kat Paine. The artist shared an image of Turner and Williams, post-ink, on her Instagram page, and it was quickly picked up by various media outlets.

And on Sept. 18, Turner revealed the meaning of the matching tattoos at the Emmys. The matching tattoos read "07.08.09." Turner's explanation is pretty adorable: The numbers are actually a reference to the date that both Williams and Turner heard they were cast as the Stark sisters on Game Of Thrones.

I've got to admit, I'm pretty jealous of their amazing camaraderie. 2009 seems like it was so long ago, and these two look super young in their audition videos. Still, they absolutely killed it, and it's amazing that they got this matching tattoo to commemorate their big break — and all of their achievements since.

Cute, huh? I love how small and delicate this tattoo is. And, they went with light colored ink, which is surprisingly fresh.

This closeup shows just how minimal this tattoo is.

I have a sneaking suspicion that the concept of this tattoo might be copied by hardcore fans (ok, me) — and if not the dates Turner and Williams used, perhaps just taking some inspiration from this tattoo style. And, knowing the dynamic between these two sisters in the early seasons of Game of Thrones, it's so satisfying to know that in real life, they vibe hard enough to share something like this for a lifetime.

More like this
9 Celebrity Couples With Matching Tattoos
By Jordan Murray
The $6 Drugstore Beauty Product Taraji P. Henson Uses Every Single Day
By Danielle Sinay
Sarah Jessica Parker Will Change Your Outlook On Aging
By Rachel Lapidos
Regé-Jean Page On The Art Of Power Napping
By Paris Giles
Get Even More From Bustle — Sign Up For The Newsletter