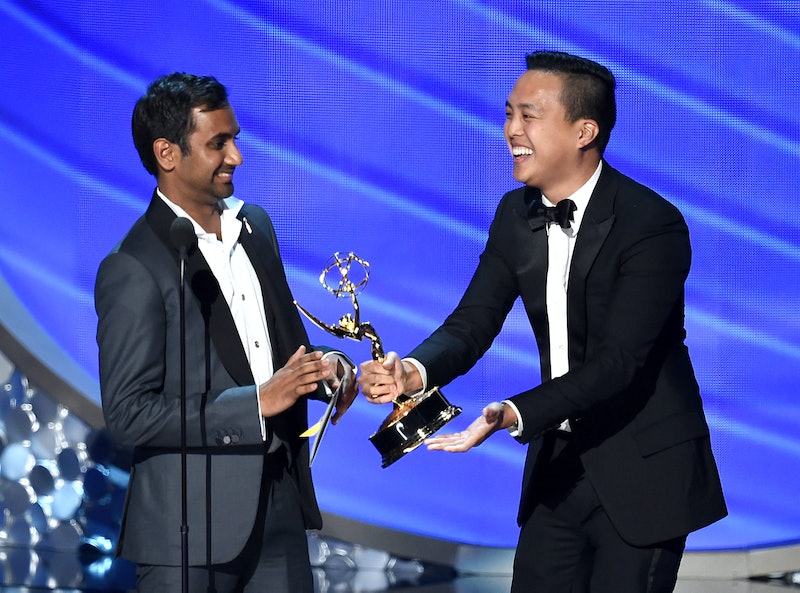 At a time in which TV and film has been striving for more diversity, the Netflix series Master of None not only brought it to the small screen, but was also victorious at doing so as well. Co-creators Aziz Ansari and Alan Yang won the Best Writing for a Comedy Series for Master of None , and their awesome speech saluted how far Hollywood still has to go when it comes to diversity. "There's 17 million Asian Americans in this country. We got Long Duk Dong," Yang said during the acceptance speech, referencing the stereotypical Asian character featured in the movie Sixteen Candles. "So we've got a long way to go."

Yang's speech also touched upon Asian representation in the media, and he encouraged Asian parents to help their children pursue the arts. "Asian parents out there: A couple of you get your kids cameras instead of violins," he said in the speech. Ansari and Yang won the award for co-writing the episode "Parents," a memorable episode of the series in which Dev and Brian try to get to know and relate to the struggles of their immigrant Indian and Asian parents. It's a touching episode that features a ton of diversity in its casting, as well as a lot of heart.

As for Ansari, the comedian took a victory lap around the stage. Why not? This is such a great win for behind-the-scenes diversity and for a show that itself is diverse, but also isn't afraid to take on diversity in the media in later episodes.

More like this
Watch The 'Heartstopper' Cast Joyfully Dance To Whitney Houston at Pride
By El Hunt
Viktor Hargreeves’ Coming Out Scenes Are The Sweetest Part Of Umbrella Academy Season 3
By Gretchen Smail
Jurnee Smollett’s Heart Is Healing
By Rebecca Carroll
What’s New On Netflix: Lana Condor’s Ghostly Comedy & A Sexy Reality Series
By Arya Roshanian
Get Even More From Bustle — Sign Up For The Newsletter