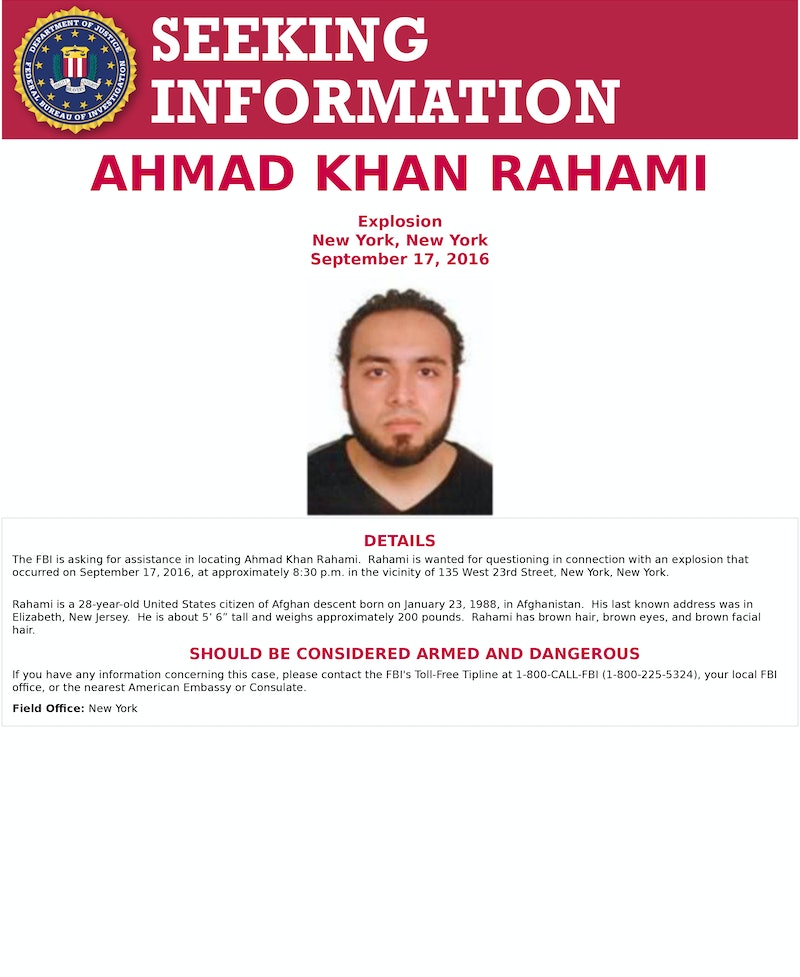 On Monday morning, the FBI announced that 28-year-old Ahmad Khan Rahami is wanted for questioning in relation to the two bombings that took place in New York City and New Jersey over the weekend, and he was arrested after a Monday morning shootout. Currently, the information regarding Rahami is scarce — we know he is 5-feet 6-inches tall, weighs around 200 pounds and has brown hair and eyes. What else do we know? A glance at some news headlines brings up another facet of information: that he is a "naturalized Afghanistan citizen." Sometimes he's a naturalized Afghanistan immigrant, or naturalized U.S. citizen from Afghanistan. The problem with highlighting these specific words is that it subtly undermines anybody who is a citizen of America.

According to the United States Citizenship and Immigration Services (USCIS), "naturalization is the process by which U.S. citizenship is granted to a foreign citizen or national after he or she fulfills the requirements established by Congress in the Immigration and Nationality Act (INA)." If we are to go by this definition, it's pretty clear that Rahami is just an American with an address in Elizabeth, New Jersey. He is an American regardless of his naturalization or his crimes, and, most importantly, he is an American regardless of his ethnicity.

When words like naturalized and Afghanistan are highlighted, it seeks to otherize Rahami as a suspect because in it, lies an implication that his ethnicity is an important factor in the crime committed. The use of such words in headlines itself, as opposed to the body of the article, seeks to establish a crucial separation of Rahami from America.

Dylan Roof's crime of murdering nine people in a historically black church was racist and investigated as a possible act of "domestic terrorism," but the word terrorist wasn't as easily splashed across headlines as apparently Rahami's ethnic origin. These are two separate cases and they shouldn't be conflated, but since 9/11 many Americans hold the belief that only Islamic extremists commit terrorism. There's a range of data that does not support this and there's evidence showing that U.S. security is actually more preoccupied with the activities of right-wing extremists.

To reiterate Rahami's ethnicity and origin as distinct from whiteness and America is harmful because it only perpetuates damaging ideologies and Islamophobic rhetoric. This is not to condemn his alleged involvement in the recent bombings or downplay the seriousness of the act; but it is worth considering the negative impact using such words has on public understanding. And ultimately, Rahami is American — whether he was naturalized or born in this country does not detract from that.