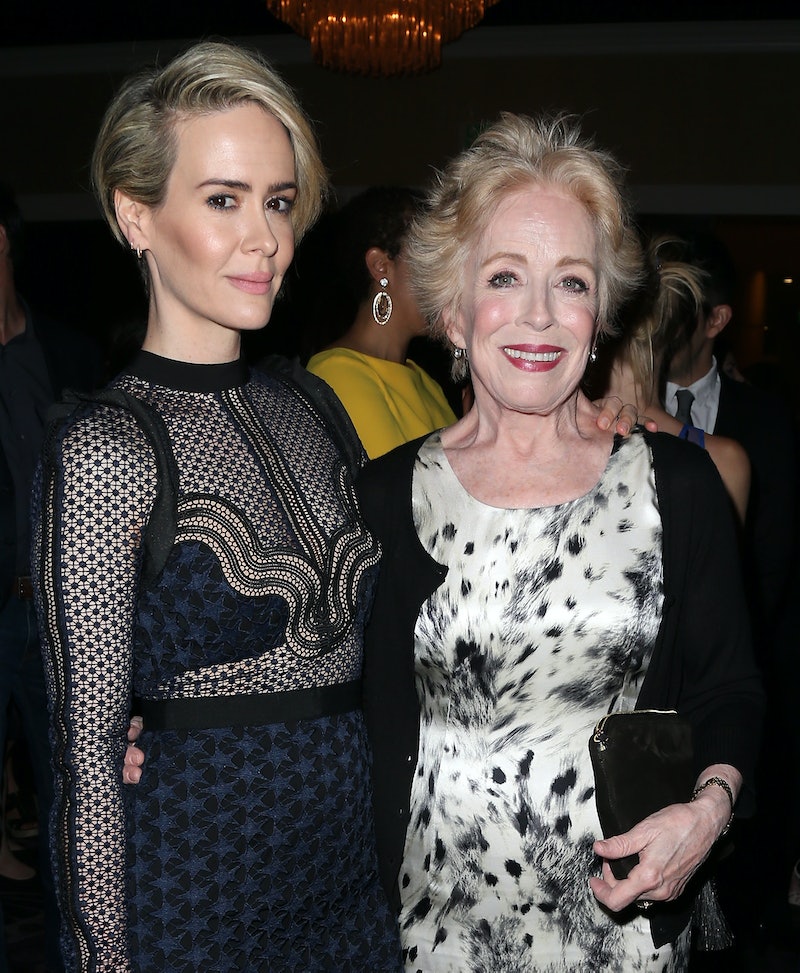 Sarah Paulson may not have brought girlfriend Holland Taylor as her date to the 2016 Emmy Awards on Sunday night (that honor was held by Marcia Clark, whom Paulson portrayed in American Crime Story: The People vs. OJ Simpson), but you better believe that Taylor spent her time fangirling over Paulson from afar. Taylor, who was in New York while the Emmys were held in L.A., actually spent the entire night live-tweeting the world's sweetest and most romantic messages to (and about) Paulson, even before the actor won the coveted award for Best Actress in a Limited Series or Movie. Take one look at Taylor's tweets to Paulson, and you'll know instantly that their relationship is proof that true love is real and that we should all strive for something on this level of romance.

Truth be told, the second that the world found out that the Two and a Half Men star, 73, was dating Paulson, 41, there was something so incredibly genuine about their relationship. Maybe it was because that, from the get-go, Taylor has voiced her true feelings about their partnership, calling it "the most wonderful extraordinary thing that could have ever possibly happened in [her] life" on the podcast Death, Sex & Money. Taylor made that fact crystal-clear on the night of the 2016 Emmys, positively gushing over her love (despite the fact that she couldn't be there IRL):

This is her reaction when Paulson arrived on the red carpet:

And this was her reaction when Paulson gave her a shoutout during a red carpet interview:

And, of course, when Paulson won:

And when she was still on a high the next day:

Talk about a public display of affection! But unlike the gross kind you see all too often walking down the street, Holland's ~PDA~ for Paulson is not just a public declaration of her love, it's a public declaration of her support, which may be even sweeter than the former. The love that these two share is evident in their relationship and the way that they speak about one another, but there's just something a little extra heartwarming to see how much Taylor supports her partner even when — and maybe especially when — she can't be there to support her in person.

It's the kind of over-excitement that you just can't keep to yourself, the kind that you have to share with both your significant other and also the world. It just comes bursting out of you. And it looks like that's exactly the level of hype that Taylor was on Sunday night, absolutely beaming with pride for Paulson on one of the biggest nights of her career.

Forget about #RelationshipGoals: Holland Taylor and Sarah Paulson are #LifeGoals.