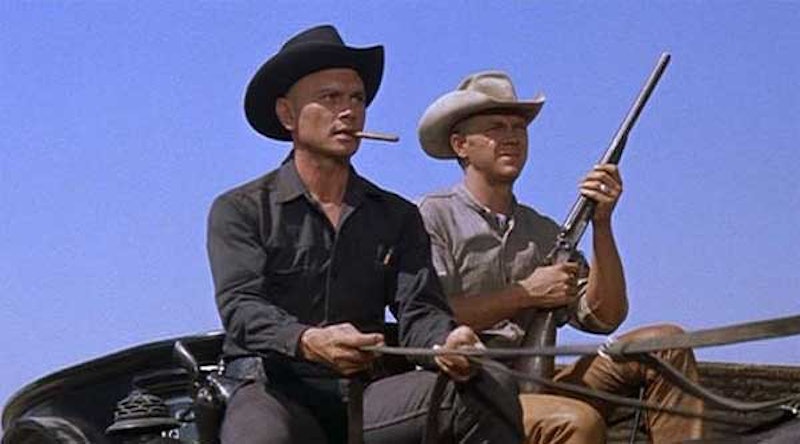 The original film was actually a remake as well... sort of. The movie was based upon the 1954 Japanese film Seven Samurai, which was about seven samurai who come together to defend a village against a town of bandits. The Magnificent Seven took that concept and put it in the Old West, which was one of the most popular movie genres in mid-20th century America. The story begins with a poor Mexican farming village being terrorized and raided by the bandit Calvera (Eli Wallach) and his gang of thieves. After the bandits leave, and promise to return, some of the villagers head across the American border in order to find weapons to defend themselves.

There, they meet gunslinger Chris Adams (Yul Brynner), who convinces them that hiring experienced gunmen is a better alternative than defending their town themselves. He agrees to come to their aid, and sets out in search of other men to join him. The first is his friend Vin (Steve McQueen), who's desperate for an honorable job after a bad gambling run and is facing a career as a grocery store clerk.

The others who eventually come on board are Chris' old friend Harry (Brad Dexter), who thinks the village hides treasure; Chico (Horst Buchholz), a young Mexican hothead looking to prove himself; Bernardo (Charles Bronson), a gunfighter with nothing to lose; Britt (James Coburn); a skilled marksman looking for a challenge; and Lee (Robert Vaughn), a washed-up gunslinger trying to regain his confidence. The seven arrive in the village and bond with the villagers in various ways while teaching them to defend themselves. Calvera sends a scouting party to the village, which is successfully driven away by the seven. Chico then infiltrates Calvera's camp and learns that they're planning to come full force at the village. After he reports back, the seven try to mount a surprise attack on the camp but find they're too late. When they return to the village, they discover that Calvera has taken control.

The seven are allowed to leave the village, but all but one agree to go back and try to save the farmers. The lone dissenter is Harry, who was unable to find any treasure and believes staying to fight the army of bandits is a death sentence. The now six gunfighters return to the village and begin a massive shootout with the bad guys, which inspires the villagers to take up arms and join in the fight. Harry, too, returns in time to save Chris from being shot, and is killed himself. Lee, Britt, and Bernardo are all killed as well before Chris kills Calvera, effectively ending the fight. With the village saved, only three of the seven remain alive. Chico stays behind in the village, having fallen in love with a local woman, while Chris and Vin ride off together and reflect on their violent lifestyle while passing the graves of their fallen comrades.

The new film changes many details of the original: The setting is different, the characters are all new, and the tone is somewhat changed, but the core story of the original Magnificent Seven remains. A group bands together to protect the innocent and do what's right, putting honor above their own lives. With that spirit guiding the film, perhaps the new movie will end up being just as revered as the original.