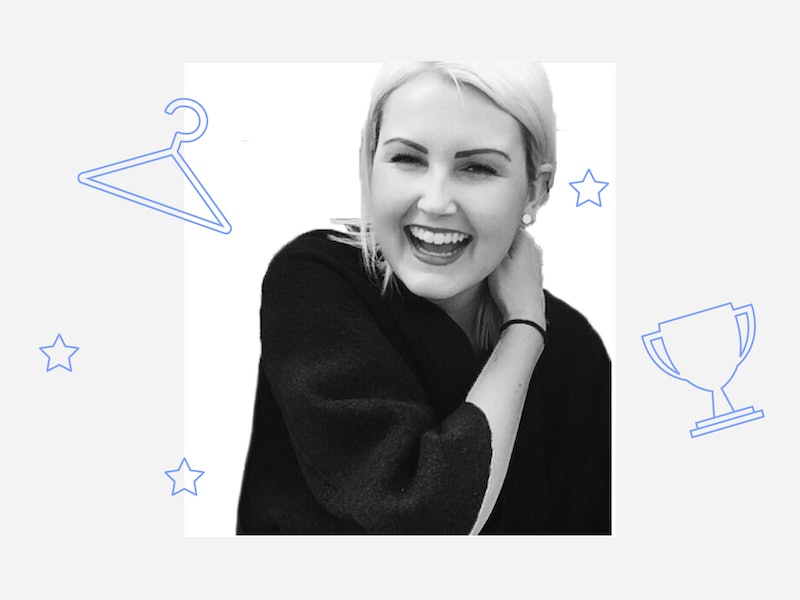 When I ask if designer Lucy Jones identifies as body positive, she requests some clarification on what, exactly, the body positive movement is. It's a question many of us who've watched the movement evolve over the past several years are probably asking these days, too. But by practical definition, Jones, winner of the Parson's Womenswear Designer of the Year Award in 2015 and honoree at Bustle's 2016 Upstart Awards, is a body positive designer without even realizing it. Her Seated Design collection is made to accommodate the specific clothing challenges faced daily by people who use wheelchairs — a demographic that's been largely ignored by the mainstream fashion industry in the past.

Jones is not a wheelchair user, but her cousin Jake is. Jones tells me she happened to be having a Skype conversation with him a few days after was given the class assignment to "design a project that could one day change the world" (no pressure). Jake mentioned he'd had a particularly rough day at school because he was struggling to pull up his pants on his own. He told her these sorts of moments made him feel like less of a human in a way.

This was Jones' first aha moment. "I couldn't believe I'd never asked him how he puts on his clothes," she says. "So I just said, 'Jake, how would you feel if I made you a pair of trousers you could do up with one hand?'" Jake told Jones that those trousers "would be the next step from not having a disability altogether." Jones realized there were likely many wardrobe-related things she took for granted that could be creating daily struggles for others.

That recognition of your own privilege is something that often doesn't hit until well into adulthood — if it ever hits at all. And while the fashion industry appears not to have shown much interest in acknowledging systemic privilege in the past, Jones is optimistic about the future. In fact, she thinks the industry might finally be ready for widespread inclusion starting ASAP.

"Vanessa Friedman did an article for The New York Times [on designing for the disabled], and she's one of the fashion world's biggest critics," Jones says. "If she's on board... that's really, really wonderful."

That's not to say that the change will be instant; 2017 likely won't be the magical year when everyone suddenly experiences equal clothing opportunity at their local mall. For one thing, designers will have to actively tweak the way they currently construct their pieces. Jones says she faced plenty of technical roadblocks when it comes to actually creating her designs, but likely the biggest lesson in making her own patterns was realizing how unrealistic it is to expect the majority of humans to fit into mass produced sizes.

The idea of standard sizes ("This is a size small, this is a medium, this is a large," as Jones puts it) has been the status quo since the mid-1900s. But Jones has realized in her work that this system doesn't really cut it for everyone. "There are all different variations of sizes," she says, noting that all disabilities are different, too. "There are different needs, different requirements, just like how bodies are different," Jones continues. "It's not just about disability. It's about the fact that everyone has a different body."

In her dream world, every item of clothing would be customized to fit its individual wearer, and figuring out how to do so while keep quality high and price low is one of her biggest goals right now. "When I say I want to customize [everything], people say 'you're crazy,'" Jones explains. But she believes that collaborating with other designers will help her reach that target.

Jones is optimistic that the rest of the fashion world will start to see things her way too. "I'm just so excited about this new era of fashion," she tells me. "I really think there's so much opportunity, and that people are waking up to that and realizing, you know what? [The status quo] isn't really working for us anymore." With so many underserved communities who are eager to buy cute clothes, designers like Jones who embrace diversity are poised to have a very fruitful future.

More like this
I Have Eyebrow Alopecia – & Microblading Gave Me My Confidence Back
By Jessica Morgan
9 Celebrity Couples With Matching Tattoos
By Jordan Murray
Yes, You Can Buy Off-White’s New Beauty Range In The UK
By Tomi Otekunrin
10 Show-Stopping Manicures From The 2022 BET Awards
By Paris Giles
Get Even More From Bustle — Sign Up For The Newsletter