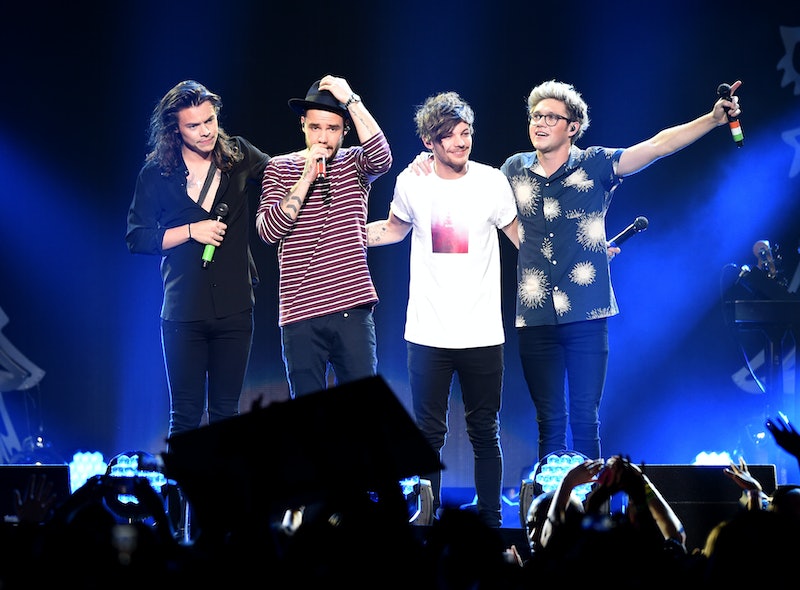 And we danced all night to the best news ever: Less than a year after the quintet-turned-quartet officially went into hiatus mode, One Direction's website is popping again. As MTV.com points out, four new One Direction T-shirts recently appeared on the group’s online store. And although neither the tees nor the product description make mention of a comeback, I'm ready to believe the shirts mean something is in the 1Dea leaves.

(And if One Direction doesn't plan to reunite anytime soon/these shirts were a *just because* addition to the merchandise site? As much of a bummer as that would be, at least we got some tees that feature water color renderings of each of the darling 1D dudes, right?) (I'll take one of each, please.)

Yes, I understand that an updated merch page doesn’t necessarily a reunion make (and if *NSYNC taught us anything, it's that a "break" can last forever). However, let us not forget about that “Future Events” tab that showed up on the 1D site Monday morning, only to vanish before we could say “Does it ever drive you crazy just how fast the website changes.” Might the fresh batch of “super limited edition” 1D tees plus the elusive “Future Events” tab mean Harry Styles, Niall Horan, Liam Payne, and Louis Tomlinson have something in the works? Are they selling these shirts now so fans can wear said shirts to “Future Events”? Could the One Direction website be dropping clues about the group's comeback?

Orrrrr are we just waist-deep in a puddle of coincidence?

This is just one more maybe-clue that a 1D reunion could very well be on the horizon. Here are some things that may point to the end of the murky tunnel that is the group's hiatus:

Whatever the case may be, please note that the 1D shoppe promises the shirts “look great on the beach, in a club or for just chillin with your friends" (i.e., they are must-purchases).