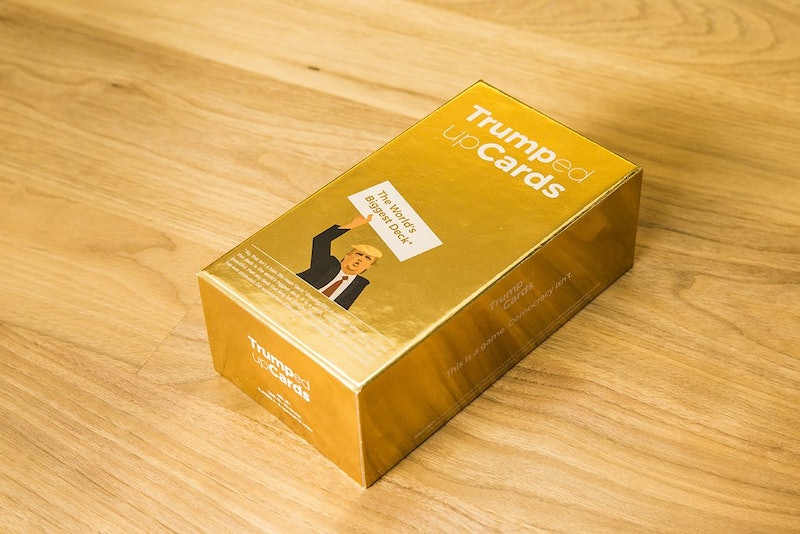 The 2016 election, and particularly Donald Trump's ascension to the Republican nomination, has induced a wide array of intense reactions, from boggled minds attempting to make sense of his bizarre candidacy and its popularity to some of the most consistently biting political satire we've seen. Silicon Valley entrepreneur Reid Hoffman jumped on the satire train with his creation, Trumped Up Cards, a game similar to Cards Against Humanity, whose rules and cards are imbued with the most extreme, shocking, and outrageous elements of the Trump campaign. And you can get Trumped Up Cards for the price of $20.16 to make any party a political party.

In a post on Medium, Hoffman explained that he and other creators of the game took their cue from comedians' riffs on Trump: "Inspired by The Daily Show and Last Week Tonight with John Oliver, we decided that satire that reveals the absurdity of our current situation is the only fitting response to these times."

As with Cards Against Humanity, a player reads a sentence with a blank in it or a question from a Blue Card, and the other players submit a White Card to complete the sentence or answer the question. For example, one Blue Card reads: "What the biggest threat facing America?" A sampling of White Cards includes "Crying babies," "Tom Brady's under-inflated balls," and "That semi-obscene Trump Pence logo."

The rules of Trumped Up Cards are the real satirical element that drives the absurdity home. Hoffman's instructions state that players should first pledge allegiance to the game, saying, "Believe me, folks, this deck is so yuuuge, you won't believe it! People all over the world are talking about it!" Then, the player who claims to have the greatest net worth gets to serve as the judge, or Card Evaluating Officer (CEO), first, and kicks off the round with the proclamation, "I'm really rich."

Lucky players will find a Trump Card in their hand — these cards give completely unfair advantages to those who play them. For example, "Play the woman card!" allows you to dismiss any female or feminist male players' answers, and "Deport an opponent's answer!" can be used when you think someone played a White Card that's better than yours.

Hoffman designed the game with two possible outcomes. In a group of "big league players," a person wins when he or she is able to spell the word "VOTE" with his or her Blue Cards (each card has a letter on it). But there's also a version for "total lightweights": "The game ends when the majority of the players grow so depressed at the prospect of a real Trump presidency that they just start quietly sobbing. In this scenario, the player who possesses the most Blue Cards at this point is the winner."

With Trumped Up Cards, you can step into the world of bombast and grandiosity within which the Trump campaign operates. Aside from being a sweet addition to your next party, your purchase will help make America great; the game's website states that profits will be donated to charity.