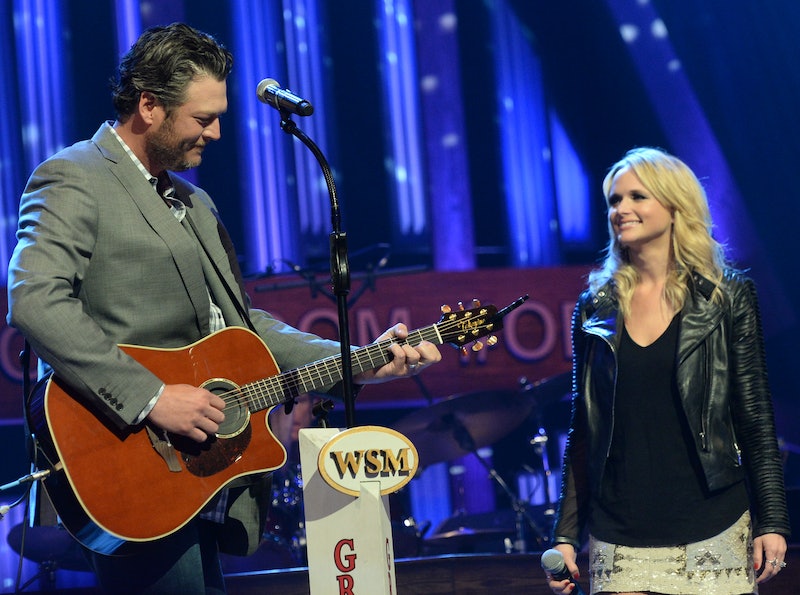 The Voice's Blake Shelton and Team Shakira advisor Miranda Lambert are one of the cutest country music pairings maybe ever. Yes, Lambert is currently competing against her husband on The Voice (I mean, come on. Who wouldn’t want to be on Team Shak?), but it’s all in good fun! It’s kind of like a pick-up basketball game between two significant others, but instead of a basketball court at a public park, it’s The Voice stage. Same thing, right? Nothing more than a little harmless competition. Let us not read into it. The pair, like many famous pairs before them, have been hit with divorce/cheating rumors, but the two always say the rumors are complete bunk. And I’m more than happy to take their word for it. They're just so adorabs!

Sure, the origin story of Shelton and Lambert is kind of scandalous, but that doesn't necessarily guarantee their current sitch is rife with drama. “WAIT. What do you mean 'scandalous'? How did Miranda Lambert and Blake Shelton meet?” you ask. “What’s their tale? I NEED ANSWERS.” Pull up a chair, my friend.

In 2005, Shelton and Lambert were introduced when they performed together at the CMT 100 Greatest Duets concert. They sang "You're The Reason God Made Oklahoma." Uh, could you pick a more perfect song for Oklahoma native Shelton to sing with his future wife?

Here's the kicker: Shelton was still married to Kanyette Williams at the time, but he dug Lambert immediately. Uh oh. “We were singing as part of a duets concert that CMT was putting on," Shelton told People.com "They paired me with Miranda, and we were on stage for rehearsal, and I don’t know, something just happened, and we both knew it.”

Shelton also talked about these uh oh feelings during Lambert's Behind The Music special: "I was a married guy, you know? Standing up there and singing with somebody and going, ‘Man, this shouldn’t be happening.' Looking back on that, I was falling in love with her, right there on stage.”

In 2011, Dateline asked Lambert about the spark that sparked back in 2005. Lambert said, "I had seen [Shelton and Williams's] wedding pictures in Country Weekly ... I've seen this my whole life —affairs, and of all people to know better, I know better than this." Shelton and Lambert say they did not have an affair, but neither will deny that the vibes were there. Scandalous vibes!