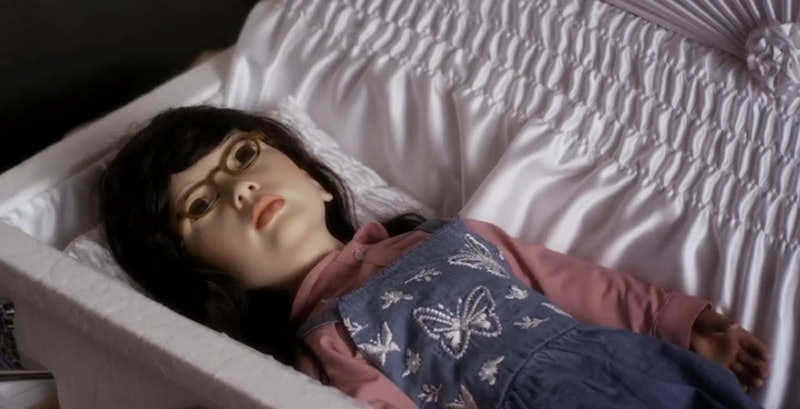 Pretty Little Liars was literally sparked by death: the pilot episode revealed the body of Alison DiLaurentis, sparking endless questions into who could have possibly killed her. Of course, as any Pretty Little Liars fan that stuck with the show past Season 4 knows, Alison wasn't actually in that grave — Bethany Young was, and she brought along a whole slew of mysteries of her own. Death has been a part of Pretty Little Liars since the beginning, and while it's not a show that kills off characters indiscriminately, there were definitely certain PLL characters that we saw meeting their maker — and others who totally floored us with their death scenes. Not every PLL character got to make it to the show's Season 7 series finale, so which PLL deaths seriously shocked us? I've curated a list to help sort the blah from the oh-my-God.

First, a little bit about this list: given Pretty Little Liars' habit of killing and then un-killing characters, I've chosen not to include characters like Mona and Alison, who were alive despite their attempted murders and/or long-standing torture in the dollhouse. This list is only for people whose real bodies we took to the grave — so who were we most surprised to send there? Here's a list of all the characters who really, truly died on PLL (as far as we know) ranked from mildly surprising to totally shocking.

It was shocking that a former Radley patient was found in what was once known as Alison's grave, but what wasn't shocking at all was that someone else took Alison's place that night. In that sense, Bethany's death was hardly shocking — it had to be a random who was dead in Ali's place in order for the mystery to make some sense.

Sorry, Pretty Little Liars, but I totally called it that Maya's so-called cousin would ultimately be revealed to be her killer. Once he went after Emily, I knew it was either him or her — and, obviously, it wasn't going to be Emily who met her maker in Season 3. The lady killer's death was inevitable.

I was a little surprised that Ian was revealed as an actual attempted murderer at the end of Season 1 — it really seemed like the show was setting him up to be a red herring, like Toby was. Still, after he fell from the bell tower, I assumed this guy was dead — learning that he killed himself afterwards was the bigger surprise. Still, his death doesn't rank much higher because there can only be one major villain on PLL, and that's A in any of their forms.

The reveal that Shana, Alison's friend from Georgia, was actually totally anti-Ali was pretty surprising, considering that the Liars totally suspected her initially and were proven wrong. Still, the most shocking part about her death wasn't that it happened, but how it did. Aria pushed Shana off the theater stage in self-defense, only for Shana to die from the fall. Given the fact that Shana's fall looked a lot more like a mild trip, her death was more confusing than anything else.

With Season 7 of Pretty Little Liars being touted as the "deadliest" season ever, it was only a matter of time before a character was found dead in their Radley hotel room. Still, Sara's death was surprising, considering she was seemingly both on Jenna and Noel's team as well as Charlotte's. Who offed Charlotte's former Red Coat, and why?

No one liked Detective Wilden, so it's not super surprising that someone hated him enough to kill him, but the "who dunnit" mystery that followed open up a ton of possibilities. It put Mama Marin on the suspect list, which means the death actually drove something. Not the most shocking death, but it did create lots of drama.

Garrett's death was pretty shocking, mostly because of why it happened. Though it seems Garrett was killed by Detective Wilden (with help from Melissa Hastings?!) Garrett's death also seemed totally random — what did he know that would have gotten him killed? The fact that we're still asking those questions means Garrett's death is still a major moment on the show. Oh, and Aria getting trapped in a box with Garrett's fresh corpse? Definitely a terrifying moment we won't forget.

Remember how I said that villains who aren't A don't last too long on this show? Dr. Rollins was a victim of that theory, but the way in which he went was both brutal and shocking. After being convinced that Dr. Rollins (a.k.a. Archer Dunhill) was behind her torture and kidnapping, Hanna wasn't too inclined to step on the brakes at an efficient speed. Hanna's hit and run made the Liars complicit in yet another murder, and provided the audience with one very bloody end to the British doc. Dr. Rollins' face popping through the windshield is burned in my memory forever.

Charlotte's death was huge turning point for PLL: it basically put the Liars back where they started in Season 1, when they were considered suspects in Alison's death. Though the death wasn't totally surprising — the Liars were seen carrying a coffin in the promotional posters, after all — what was surprising was the question of who could possibly have wanted to kill the former Big A. The answer? Well, pretty much everyone — but who actually did it was another story entirely.

Like her daughter, Jessica made a lot of enemies. Still, her death is particularly shocking because it came totally out of nowhere — and right before she got to see that her daughter, Alison, was alive. Jessica's murder is one of just two unsolved murders on this list, and hopefully we'll get the truth about what happened to Jessica soon.

OH. MY. GOD. Noel's decapitation was one of the craziest deaths PLL has ever done. Though the fact that he died wasn't the most shocking thing of all time — I mean, it's Season 7, everyone is expendable — but the fact that Noel fell on a battle axe and died was too crazy not to rank this highly on the list.

Perhaps the most disturbing thing about Maya's death is that it actually had nothing to do with the A game at all — she died at the hands of a freelance psycho. Maya's death was one that came virtually out of nowhere — though Maya was on the run, no one really suspected that she would only be returning to Rosewood in a bodybag. The tragedy of Maya's death and the unexpected nature of the whole thing makes it the death that PLL fans are still reeling from — after all, there's a reason why people still theorize about Maya's potential involvement in the A story.

With just half a season of Pretty Little Liars left, will any future deaths be able to trump the ones already on this list? We'll have to wait until April of 2017 to find out.