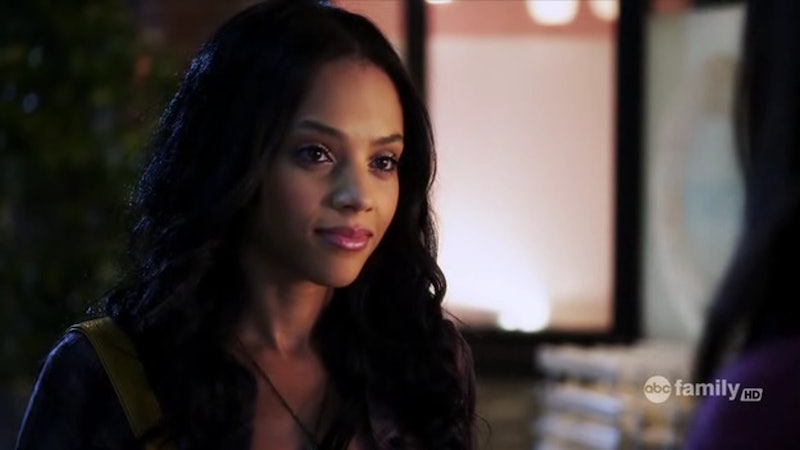 We're just one week away from the Big A Reveal on Pretty Little Liars, so it should come as no surprise that theorizing among fans has become somewhat of a frenzy. As many passionate viewers look to the Liars, their parents, Mona, and pretty much everyone else who's acted even remotely suspicious this season, I've been looking back — all the way back to the first two seasons, actually. Why all of the hindsight? Because one popular PLL theory suggests that Maya is A, and considering that we haven't seen her since the jaw-dropping Season 2 finale, "UnmAsked," we have to analyze old episodes — and because it's PLL, anagrams — for clues.

Of course, the clues continue into more recent seasons, because if Maya is A, she's been around the Liars this entire time, which just makes the possibility even more heartbreaking — wait, where have I heard that word before? Oh right, in an interview with Bustle, PLL's Keegan Allen said that the March 24 Big A Reveal will be "heartbreakingly beautiful," and I think Maya coming forward as A would fit that description. She was Emily's first real girlfriend, and Emily was absolutely devastated by her death. If she were to discover that Maya has actually been alive and tormenting her this whole time, heartbroken wouldn't even begin to describe how she, and viewers, would feel. So, how exactly could Maya be A? Here's how some smart, observant fans put all the pieces together.

While many fans use the fact that Aria's return to Rosewood coincided with the first text from A as evidence that she could be A, Tumblr user rosewood-clues reminds us that the same goes for Maya. She not only moved into Rosewood just before the texts began, but into the DiLaurentis' own house. She was living there when suddenly, after a year of being missing, Alison's body was found (well, we now know it was actually Bethany Young's body, but still a body).

Something else kind of major happened in the PLL pilot: Spencer saw a blonde girl in the DiLaurentis house. We never found out for sure who it was, and Alison wouldn't actually begin sneaking around Rosewood until much later. Besides the fact that Maya was actually living in the house at the time, Tumblr's AnalyzingA realized that in the episode, we see Maya wearing what appears to be the same outfit as the girl in the window.

Look beyond Maya's jacket and scarf – she's clearly wearing a dark red tank top with a white cami peeking through the top, just like the girl in the window. It seems pretty likely that Spencer actually saw Maya in a blonde wig that night, maybe one that she continued to wear, but with a certain red coat instead of a tank top.

Maya moving into Ali's old house also gave her access to much more than her bedroom window. It's been made very clear over the course of PLL that Ali hid many important things throughout her house. From things that revealed too much about her own life to the secrets of her closest friends, if anyone were to really tear apart the DiLaurentis, they'd uncover a lot — maybe even enough to get started as A.

Did anyone else find Maya's sudden departure to, and just as sudden return from, True North suspicious? Sending your child a way to a camp for misbehaved teens because they were caught smoking weed once seems pretty extreme, even for the strictest parent. Maybe Maya had a more questionable history than we realized, and this was simply the last straw for her family. We also don't know what exactly happened at True North, besides that she met the terrifying Lyndon James. What if Maya left the camp much sooner than we thought, and in the mean time was working on her A game?

What if she met someone else at the camp who was already a part of or joined the A team? Maybe someone like Noel Kahn? We know he was involved in helping Alison hide at some point, and that he was no stranger to trouble. Maybe he was sent to True North for a couple weeks, where he met and bonded with Maya. We know that when she first secretly returned to Rosewood, she spent a lot of time with Noel at his cabin. This could explain how they became so close. And since he had a connection to Ali, he could've trusted Maya enough to spill some of Ali's secrets, unknowingly fueling the A fire.

The rosewood-clues Tumblr also pointed out a possible reference to True North in the Season 3 finale "A DAngerous GAme." After the lodge the Liars and Mona are in is set on fire, Toby sees a girl walking through the woods, but is knocked out before he can see her face. Then, someone throws a lighter on the ground next to him, decorated with a compass rose.

Though northwest is the direction highlighted on the compass, it's connection to north in general is certainly enough to suggest True North. And if that's not enough for you, don't worry. Many fans, including Tumblr users fallenangel901 and revealingpll, have analyzed the silhouette of the girl Toby saw in the woods and deduced that there's a very good chance she could be Maya.

Of course, there is one giant problem with this theory: Maya is dead. Or so we think. If there is one rule of PLL,it's that no one is dead until we see the body. And in the case of Maya, not only did we never actually see her body (or a funeral, for that matter), but Emily's mom specifically tells her, "they think it's Maya," when the body is found. "They" also thought Bethany Young's body was Alison's, until Alison was literally standing in front of them, alive and well. Spencer also thought she had found Toby's dead body in Season 3, landing her in Radley, until it was revealed to be a bait-and-switch, courtesy of A. It's totally possible that Maya is alive, and faked her own death to throw off all suspicion and make Emily think she was gone for good.

Now, you might be thinking, "But Lyndon confession to killing Maya!" However, that's not entirely true. As fallenangel901 pointed out, he never actually said he killed her. He just said that Emily took Maya away from him, and now he wanted to take someone she loves by killing Paige. Lyndon was definitely a possessive psychopath, but he may not have actually killed Maya. Fallenangel901 posits that Maya staged the evidence that suggests he killed her. Since Lyndon was crazy, he could've actually been stalking Maya, and she made sure Emily knew someone was obsessed with her, so that when the time came, Emily would believe that stalker was the same killer.

Lyndon is totally removed from the rest of the PLL story. If he really killed Maya, why did Mona give that code from Radley, "Maya Knew"? Whatever Maya knew must've had something to do with A and the larger mystery, otherwise Mona wouldn't have any reason to bring her up. The fact that we still don't know exactly what that riddle was suggesting might be the biggest clue we have that Maya's story isn't over.

Now, for the final clue. Bustle's Kaitlin Reilly pointed out last June that Radley Sanitarium can be an anagram for Mary A. DiLaurentis, and a Reddit thread expanded on that observation to list a few more phrases found within the institution's name. They include: A DiLaurentis Army, DiLaurentis A Army, and Maya R. DiLaurentis.We know that Jessica DiLaurentis' affair with Peter Hastings resulted in Jason, and they kept his true parentage a secret for years. What if Kenneth DiLaurentis also had an affair that resulted in a child, who secretly grew up with her mother?

It may seem strange for that mother to then move into the DiLaurentis' old house, but Jessica moved her family next door to Peter, so it wouldn't even be the first occurrence of such awkward geography in Rosewood. If Maya discovered the truth about her paternity, it could also have lead to her being curious about Alison, which would lead to her searching through her room, discovering her secrets, and next thing you know, she's A.

However, if Maya St. Germain is indeed Maya R. DiLaurentis, she could also be a more distant relative of the family, like a niece or cousin. Last week's episode of PLL introduced another anagram, found in Mona's room, which fans have solved to spell either Charles DiLaurentis or Rachel S. DiLaurentis.

Could Charles or Rachel S. DiLaurentis be one of Maya's parents' real names? Everyone seems to think that Bethany Young is the one with a secret familial connection to Alison, and it's a good theory, but maybe it's Maya family tree that we should be analyzing.

We all may have our A sights set on the characters showcased on PLL every week, but I think fans should start preparing for a face we haven't seen in a while to come out from underneath that black hoodie when Big A is finally revealed. For more theories, check out Bustle's Pretty Little Liars podcast below.

More like this
The 'PLL: Original Sin' Creators Say A’s Identity Will Be “Very Clear” By The Season Finale
By Alyssa Lapid
Every Horror Movie Reference In The 'PLL: Original Sin' Premiere
By Alyssa Lapid
Everything To Know About 'Evil' Season 4
By Meguire Hennes
Molly-Mae Hague Has Secured Herself A Pretty Little Fortune
By El Hunt
Get Even More From Bustle — Sign Up For The Newsletter