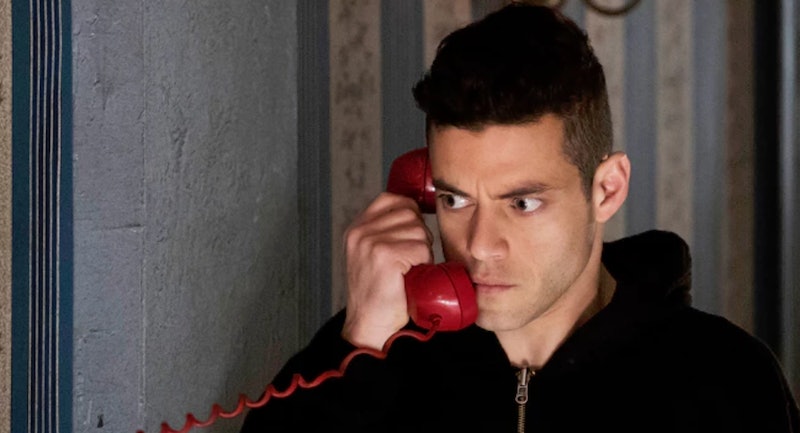 On the post-Emmys edition of The Ringer Podcast Network pod, hosts Chris Ryan and Andy Greenwald chatted with the Mr. Robot creator about the award show, Rami Malek’s much-deserved win, and this Wednesday’s finale. At the tail end of their conversation, the The Watch hosts asked Esmail to give “a little tease” for this week's episode. Careful to not spoil anything that happens on the to-be-aired installment of the two-part final episode of the phenomenal season, the showrunner told Greenwald and Ryan this and only this:

Here’s what I will say, 'cause I’ve listened to every episode of The Watch, you do want to stay, from what I’ve heard, you will want to stay after the credits. That's all I'll say.

Duly noted, Mr. Esmail. Thank you kindly for that legitimately important tip. I have zero clue as to what will happen once the credits are through (crossing my fingers for another surreal '80s sitcom bit!), but I do know that I will remain plopped in front of my television set until the finale is actually over. The mere thought of missing even a millisecond of this chaff-free show sends a piercingly cold chill down my spine. (Thankfully, I'm wearing a very Elliot hoodie right now.)

If you won’t be able to tuck into the episode when it airs, make sure you adjust your DVR recording settings beforehand.

...Unless you’re chill with the recording potentially cutting off the actual ending to the episode, that is. Maybe you're a daredevil of a TV viewer, I don’t know your story. But here's my story: I’d rather be safe than sorry, so I will extend the recording by 20 minutes even though I plan on watching it live. I know, I know. My story is so exhilarating. Some may say it's as thrilling as the final scene of "eps2.8_h1dden-pr0cess.axx."