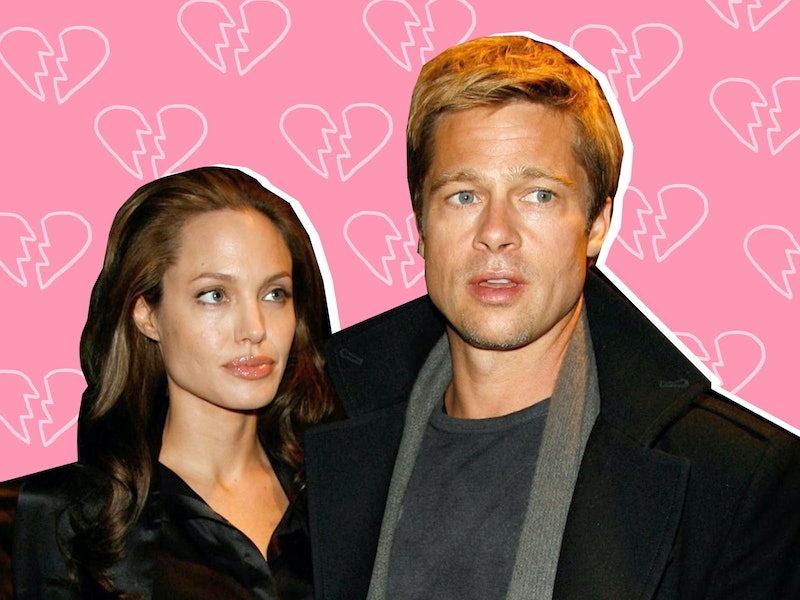 Even as I type this, I feel slightly pathetic admitting to you how bummed I am to hear that Brad Pitt and Angelina Jolie are getting a divorce. Not run-of-the-mill "If two hotties like that can't be happy, what chance do I have?" bummed; I feel it in my body, on my skin and in my stomach, a totally illogical sense of ill ease that I can't quite shake. I am not gullible enough to think that, through the virtue of watching their movies or reading tabloid articles about their union, I somehow "know" them or their family. I'm also not deluded enough to think that I, a happily average Internet writer, have too much in common with someone who's been voted both the most beautiful woman in the world and the most admired woman in the world (well, except for the fact that we both have some regrettable tattoos).

I'm not even totally sure of the last movie either Jolie or Pitt starred in. The one where she was, uh, some kind of witch? I've been aware of Jolie since 1995, when she starred in Hackers, and followed her career casually in the decade that followed. But in 2006, when it became clear that Angelina was pregnant and Brangelina was here to stay, I felt intimately connected to the tomb raider herself on that same illogical gut level. And the dissolution of her seemingly picture-perfect family makes me wonder if I've been too optimistic about my own chances at stability.

Part of what has always made Jolie such a gripping public figure is that her problems didn't feel unique to the uber-wealthy; they seemed like problems anyone could (and many of us do) have. Like Jolie, who grew up raised by just her mother and has had a contentious relationship with her father that swung in and out of estrangement, I also had a dramatic childhood in a divorced household and had a complicated, traumatic relationship with one parent — my mother's mood-swings and fits of rage colored my childhood to the point where I can barely remember friends or vacations or anything but her angry words. When I was younger, I experimented with a rainbow of substances (just like Angelina) in a way that sometimes made people who cared about me concerned. I sought out the soothing embrace of men who seemed completely inappropriate for me (just like Angelina) and I committed to relationships way too fast (just like Angelina). Jolie got married for the first time at 21, to a man she'd only dated briefly; though I can't speak to her heart, I also spent my twenties instantly committing to dudes I barely knew because I felt lost.

After watching my mother hate my father much longer than she had ever been in love with him, and feeling the deep toxicity of her love for me, I didn't really believe that love existed at all. I felt like we were all just floating through space, and that the best anyone could do was find someone who would let us hang one for a while before shaking us loose again, leaving us to ping-pong through the void on our own.

It taps into all of my worst fears — that there's no way to truly outrun a troubled childhood, that happiness is for other people. On the most secret levels of my psyche, I even wonder if I've set some kind of timer on my own relationship by getting married this year, after six years of dating.

When Jolie and Pitt were expecting their first child in 2006, I was 24 and still doing pretty much all of these troubled things — and yet, the Jolie-Pitt union somehow felt like a lifeline. Angelina had been turning her identity around for years at that point, of course, going from a woman who seemed to be chronically in search of love and meaning, to a mother and burgeoning humanitarian — worthwhile pursuits, obviously, but things I knew I couldn't do.

But the way Jolie fell in love felt different to me. I didn't have a Google alert on "are angelina and brad still together?" or anything — I'm not that big a creep — but every time I surfaced from the sloshing ocean of my own problems and saw that they were still together, still seemingly in love, still traveling the world with an ever-expanding family, I thought: maybe there's something on the other side of whatever I'm going through right now. Maybe it's worth pushing through.

Like Jolie, I got my life together before I met my spouse. At 28, I had finally gotten a handle on my drinking, started pecking at the earliest beginnings of my writing career, and had committed to a life of singlehood — not because it was what I wanted, but because it seemed more noble than the life of falling desperately for men who seemed like they could take or leave me, which was what I had been living. As Jolie told Elle in 2014, "I never thought I'd be in love, I never thought I'd meet the right person ... Having come from a broken home — you kind of accept that certain things feel like a fairy tale, and you just don't look for them." In that moment, I thought I had discovered the quiet dignity inherent in a life of not looking.

But when I met my now-husband, the world felt different. There was finally safe harbor. I realized that my wild years had all just been a defense; my childhood had been so terrifyingly unstable that the only way I had figured out how to cope was to push my own stability to the absolute limits and see if I survived. I had, and now it seemed like there was only one adventure left worth having: fall in love, and see if I could be a happy human being.

As the years went on, I felt connected not to Jolie herself, but to her family with Pitt. I liked the way they had tons of kids but just never seemed to feel like getting married — until they finally did get married, with Angelina clad in an impossibly expensive couture gown that had been scribbled on by her children. My partner and I, too, didn't feel like getting married, until we did; and though we're planning on no kids, rather than Jolie and Pitt's six, I felt some weird kinship with them — we had both made choices that made people think of us as freaks, and hell, maybe we were freaks; but we were freaks who, at long last, were happy.

The Brangelina break-up has nothing to do with me; I know that. But as an idea, it taps into all of my worst fears — that there's no way to truly outrun a troubled childhood, that happiness is for other people. On the most secret levels of my psyche, I even wonder if I've set some kind of timer on my own relationship by getting married this year, after six years of dating — what if there's some kind of dark magic to my childhood, as insensible as any fairytale, where letting my guard down and feeling secure in my relationship means that my days with my husband are numbered?

On some level, I feel shitty and selfish for even writing this — Angelina Jolie's life is her own business, not my drama. But we feel connections with celebrities for all sorts of reasons — and sometimes, those reasons are that their lives tell us stories we haven't heard anywhere else. Before Jolie became a star, I never knew of a woman who'd had a childhood like mine and moved on to an adulthood that seemed stable and satisfying, with room in it for love and family. Her divorce doesn't mean she didn't have these things, or that people who come from troubled families can't ever create new, untroubled ones. But it knocks the wind out of me, just a little. And it makes me worry that 24-year-old me, who feared that finding lasting love was a lot more difficult than anyone seemed to let on, might have known more than she thought.