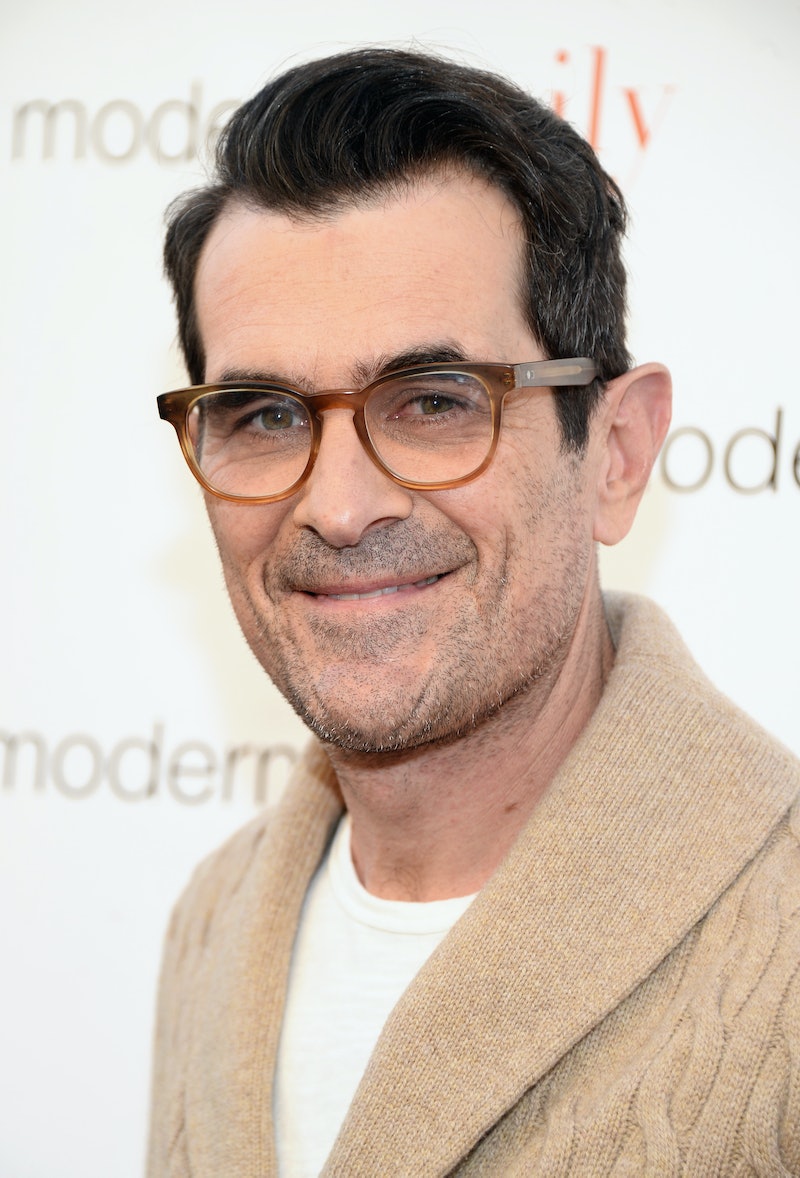 With fall TV back in full swing, fans are getting excited to not only watch the premieres of their favorite TV shows, but also to rewatch the previous seasons coming available on streaming services and DVD. Modern Family fans rejoice, the season 7 DVD became available on Sept. 20 and the Season 8 premiere is Sept. 21. So, while you embark on the new season, you can also enjoy last season, complete with a lot of cool bonus features. One extra video, in particular, is close to Phil Dunphy actor Ty Burrell's heart because it features Kids in the Spotlight.

The organization is a non-profit that trains "youth in foster care and other underserved youth to create, write, cast, and star in their own short films," according to the organization’s website. Burrell tells Bustle he was inspired to work with the non-profit because his father worked in the foster care system as a family therapist. "I heard what they were doing. Which is they were giving kids in the foster care system, in group homes, … all of the facilities to write and produce and cast and perform in their own stories," Burrell says of the organization. "And, it struck me … It really, really hit me like a ton of bricks, just how good that sounded to me. And, how good that had to be for kids. I jumped in immediately." He continues, "Like most actors, in many ways I’m useless," he says with a laugh. "They’re doing such incredible work. There’s amazing women that are running this organization. I just kind of said, ‘Is there anything I can do?’ I’ve been just trying to sort of spread the word."

Burrell’s involvement has brought Kids in the Spotlight to the Modern Family season 7 DVD, where there will be a bonus feature about the non-profit, and all the work it's doing. Burrell says giving these young filmmakers the opportunity to tell their own stories is so powerful because it gives kids a voice. "These kids [who] are essentially marginalized by society are given the chance to tell their story. Whatever it is," the actor says. "Some of them are very dark and hard to watch. And, some of them are really silly. It’s a valuable thing for these kids to be able to tell whatever story they have."

In addition to giving kids the tools to express themselves, the benefits of Kids in the Spotlight are immeasurable. Burrell says the non-profit helps give kids the opportunity and responsibility to complete an ambitious project — which builds self-esteem. "It’s a chance for them to have a real project that they have to finish. It’s an incredibly ambitious thing for anybody. Let alone kids that have even more challenges than we do. And, I think that’s an amazing gift of self-esteem to be giving a kid," Burrell said.

Additionally, the program is also a vocational tool for its participants. Burrell notes that, in his mind, the expression and self-esteem garnered by the program are its most important pieces, but adds that there are hundreds of jobs on a film or television set and that Kids in the Spotlight exposes youth to these sorts of jobs. He says the kids see all of the effort that goes into the lighting, the makeup, the transportation, and more — as well as writing and performing jobs. A few Kids in the Spotlight alumni have gone on to pursue careers in film and television, and Burrell says he hopes to see more inspired kids as the program grows. "I think there’s a real hope that if this grows that a lot of these kids with their self-esteem will see that a lot of these jobs they can do and they can thrive, that they might love some of these jobs," the actor says.

To learn more about the charity near to Burrell’s heart, check out the Season 7 Modern Family DVD features or download the Kids in the Spotlight app on iTunes. The app will show some of the short films and provide an easy way to donate to the non-profit so you can get involved, too.