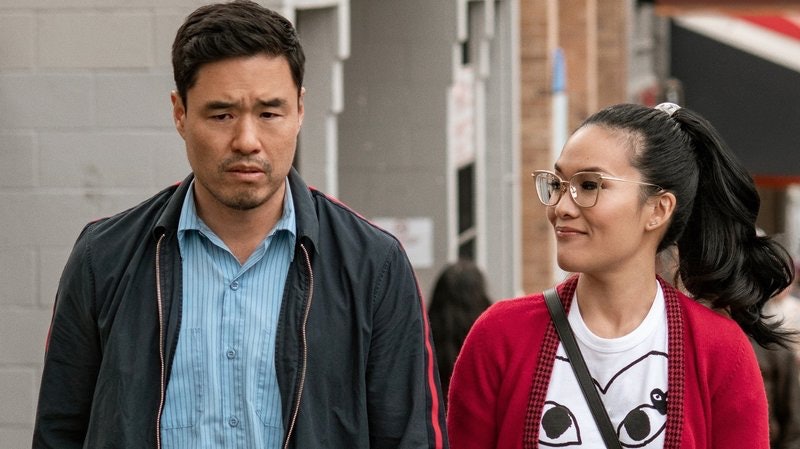 Romance alert. This movie list is all about the power of the snuggle. Is there anything better after a hard day than sitting down to a great Netflix movie to watch with your partner? Snacks? Check. Blankets? Check. Preferred alcoholic or nonalcoholic beverage? Check. It's one of those times you can just kick back and be yourself. No forced conversation about the difficult things going on in the world. Just the shared experience of a parallel emotional journey through film. Did we mention the snuggles? Finding a good Netflix movie to watch with your girlfriend or boyfriend might be hard, but this list has you covered.

This time travel rom com stars Hugh Jackman as a wealthy duke from 1876 who is propelled through time to the present day and falls in love with a very modern career woman played by Meg Ryan. The comedy here comes from Jackman’s absolute mastery of 19th Century manners and the shenanigans of the duke’s mom-mastery of modern life. Plus he’s totally swoony in the costume, he should really do more period pieces.

Anne Hathaway and Jim Sturgess star in this 2011 romantic drama about a sort of couple who reunite on the same day every year. After spending a fateful night together on July 15, 1988, Emma and Dexter agree to meet again the following year to see how their post-graduation lives have come along. Their meetings turn into yearly events, some loving, some filled with tension, all leading up to one final July 15.

Angelina Jolie and Johnny Depp star in this sexy thriller that has everything: clever disguises, gorgeous European scenery, riveting action scenes, relatively confusing plot twists, and stunningly beautiful dresses. The movie doesn’t really know if it’s a comedy or a drama, but it’s a heck of a lot of fun to watch, and despite its tonal confusion was nominated for a number of Golden Globe awards.

Is Jerry Maguire the movie that made Tom Cruise Tom Cruise? Maybe, maybe not. But his guttural screaming of “Show me the money!” will go down in history as one of cinema’s most exciting scenes. As will co-star Renee Zellweger’s uttering, “You had me at hello,” before the duo of Jerry and Dorothy end up together in the end. Sigh.

Sure, Robin Hood: Men in Tights is a mockery of this very Robin Hood adaptation. And sure, Kevin Costner's British accent goes in and out throughout the entire movie. But the action here is fun, the arrows plentiful, Morgan Freeman's sarcasm surely quippy, and the romantic glances between Costner's Robin and Mary Elizabeth Mastrantonio's Marion swoon-worthy. Stick around for the Bryan Adams music video for "Everything I Do, I Do It For You" that rolls through the credits.

Always Be My Maybe

This Netflix original was a hit when it first premiered back in May of 2019. Comedian Ali Wong co-wrote this rom com in which she stars as a celebrity chef whose reunion with her childhood somewhat sweetheart throws a damper into her plans. An ace cameo here from Keanu Reeves playing an exaggerated version of himself is a true gut-buster.

Joaquin Phoenix stars in this film from director Spike Jonze set in an unspecified near future. Theodore (Phoenix) installs a new operating system on his computer, phone, home, and basically his entire life. Scarlett Johansson plays "Samantha," the voice of the operating system. There is a love story in here about a man falling in love with someone who doesn’t exist, and sure the end of this movie might just be the beginning of Terminator’s Skynet, but it’s so quirky and cute!

The night that Moonlight won Best Picture at the Academy Awards won't soon be forgotten for movie buffs. But even if you didn't witness envelope-gate first hand, you should still see this stunningly beautiful love story. The film explores three stages; the childhood, adolescence, and young adulthood of in the life of Chiron, a young black man in Miami and touches on black masculinity and sexuality.

Science is sexy! This drama tells of the love story between astronomer and physicist Stephen Hawking and his wife Jane. Eddie Redmayne won Best Actor at the Academy Awards for his portrayal of Hawking, with Felicity Jones earning a Best Actress nod. Even if you're not terribly into astrophysics or the cosmos, their story or survival through Hawking's ALS diagnosis is quite moving.

To All The Boys I've Loved Before / P.S. I Still Love You

Another set of Netflix originals, 2018’s To All The Boys I’ve Loved Before and it’s 2020 sequel, To All the Boys: P.S. I Still Love You, stars Lana Candor as Lara Jean Covey, a teenage girl whose love letters get “accidentally” sent to her secret crushes. While the first movie finds Lara Jean ending up with one of those crushes, the sequel explores a romance with another. The movies are based on the books of the same names by Jenny Han, with a third, To All the Boys: Always and Forever, Lara Jean, in the works.

Another big one at the Oscars. This dramedy earned Jennifer Lawrence her big Best Actress win. She co-stars along with Bradley Cooper as a couple who deal with their own mental health issues while also trying to move forward after some tragic events. The film culminates in a ballroom dance competition that is kind of hilarious in its awfulness. But Cooper and Lawrence have great chemistry, and Rober DeNiro's supporting performance is lovely.

Speaking of ballroom dance, did you know that before he hit it big stateside with Romeo + Juliet, director Baz Luhrmann utilized his highly stylized design for an Australian romance about ballroom dance competitions? If you're a serious Luhrmann fan, you probably have this memorized, but for casual fans of his bright, shiny, snappy, musical movies, Strictly Ballroom is a must-see in the director's "Red Curtain Trilogy." Now, show me your paso doble.

This sci-fi epic from the Wachowskis stars Mila Kunis as the descendant of an intergalactic queen, with a hunky Channing Tatum as a space-surfing guardian who is kind of half wolf? Sean Bean co-stars here as a guy who is also half bee, and Eddie Redmayne whisper-screams his way through playing a bad guy. It sounds awful but it's actually amazing.

Guess Who's Coming to Dinner

This 1967 comedy starring Sidney Poitier, Katharine Hepburn, and Spencer Tracy was ahead of its time, by two weeks to be exact. Just a half a month after the film, which focuses on interracial marriage, finished shooting, anti-miscegenation laws were struck down by the Supreme Court in Loving v. Virginia. The movie has also been selected for preservation in the National Film Registry by the Library of Congress for being "culturally, historically, or aesthetically significant."

If you're in need of a little raunchy comedy with your romance, the 2005 Ryan Reynolds movie Just Friends is one of those early-aughts gross-out comedies that is actually pretty sweet. Reynolds plays a formerly overweight high school nerd who tries to ignite something with his high school crush while home for Christmas. The VIP here though is Anna Faris, who is hilarious as Reynolds' characters current girlfriend.

Back to the Future Part III

The third trip for Marty McFly (Michael J. Fox) back through time takes him to the 19th Century Old West wear his mentor Dob Brown (Christopher Lloyd) has been trapped. The third movie in the trilogy is another fun time travel adventure, but the real heart of it lies within the romance between Doc and Clara (Mary Steenburgen).

Based on the popular 1989 book by Mexican novelist Laura Esquivel, Like Water For Chocolate follows the story of a young woman named Tita (Lumi Cavazos), whose mother forbids her from marrying the love of her life, Pedro (Marco Leonardi). Tita channels her passion and frustration into her cooking, and makes it look oh so sexy, while the magical realism of the novel takes over.

Speaking of cooking, it's always a plus when the food on screen actually makes you hungry in real life. This delectable comedy simultaneously tells the story of Julie (Amy Adams with a bad haircut), a food blogger, and Julia Child (Meryl Streep), one of the world's most beloved chefs. The romance here lies in the seriously sweet pairing of Streep and Stanley Tucci as her husband. Honestly, you can just skip the Julie parts.

This coming of age romantic drama stars Miles Teller and Shailene Woodley as teen sweethearts who deal with trauma and alcoholism. The 2013 film is based on the 2008 novel of the same name by Tim Tharp. This movie is also a who's who of up and comers for the time, with Mary Elizabeth Winstead, Kaitlyn Dever, and Brie Larson co-starring along with Kyle Chandler, Jennifer Jason Leigh, and Bob Odenkirk. Keep it on your list of movies to watch with your girlfriend on Netflix.

The Mask of Zorro

Antonio Banderas, Anthony Hopkins, and Catherine Zeta-Jones star in this 1998 adaptation of the legendary masked swordsman. Hopkins plays the original Zorro, Don Diego de la Vega, who has escaped from prison to find his long-lost daughter Elena (Zeta-Jones) and avenge the death of his wife. He trains Banderas to be the new Zorro, who then falls on love with Elena for some swash-buckling romance.

Domhnall Gleeson stars as a charming young man whose father (Bill Nighy) informs him on his 21st birthday that the men of their family have the secret ability to travel back in time. He meets and falls in love with Mary (Rachel McAdams) and uses his abilities to improve his life. Trust us when we say this is the better time travel love story featuring Rachel McAdams. It's also one of those good movies to watch with your girlfriend on Netflix

One of director Kevin Smith's 90s classics, Chasing Amy stars Ben Affleck as a comic book writer who gets involved in a relationship with a woman named Alyssa (Joey Lauren Adams) who is a lesbian. Jason Lee co-stars as Affleck's co-writer who is secretly in love with him. The movie has lot to say about slut-shaming, sexual orientation and fluidity, and attraction. Surefire hit for a sexy night.

So if you're staying home tonight, and really, file these under your list of movies to watch with your boyfriend on Netflix.

More like this
Here’s Everything Coming To & Leaving Netflix In February
By Jake Viswanath
12 Years Ago, Austin Butler Manifested His Oscar Nom In This Disney Movie Scene
By Jake Viswanath
Sandra Bullock’s Razzies Speech Proves She’s The Ultimate Miss Congeniality
By Sam Ramsden
Anne Hathaway Shared A "Thrilling" 'Princess Diaries 3' Update
By Darshita Goyal
Get Even More From Bustle — Sign Up For The Newsletter
From hair trends to relationship advice, our daily newsletter has everything you need to sound like a person who’s on TikTok, even if you aren’t.

This article was originally published on Sep. 28, 2016