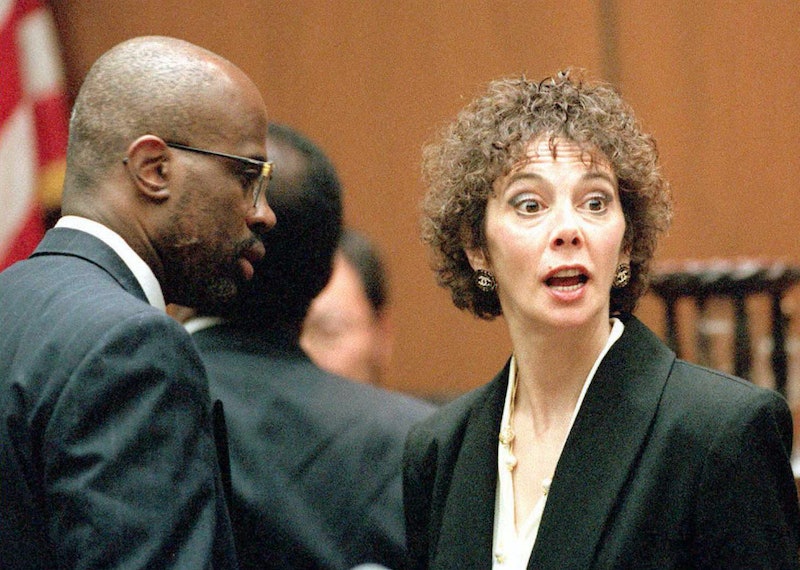 There was more to the O.J. Simpson case than just the case itself: Two of the main prosecutors in the O.J. Simpson case, Christopher Darden and Marcia Clarke, had pretty obvious chemistry together — though, of course, they've consistently been pretty hush hush about what the status of their relationship back in the day. This tendency to keep secrets has undoubtedly left spectators that much more intrigued — and now, even more so that the palpable chemistry between the was referenced in Ryan Murphy's FX show The People v O.J. Simpson: American Crime Story. But, were Christopher Darden and Marcia Clark ever together?

Thanks to Murphy's show, people who remember the mid-'90s trial relived the unmatched chaos, and younger folk were captivated by the insanity of the case. Of course, one of the most significant storylines of the double-murder case was the connection between Darden and Clarke, both during the trial and the 2016 show, which brilliantly portrayed their deep bond birthed from their irreparable stress. When it came to the show, they were the ones fans were rooting for. While the show hinted at a romantic and possibly sexual past, it still left things ambiguous, though. But now, it looks like we might have some answers: Maybe it's the magic of the show's numerous Emmy wins, but, according to ET Online, Darden has finally revealed what happened between him and Clark all those years ago.

Turns out, something did. The real-life Darden sat down with Entertainment Tonight to reveal he and Clark, who both have families of their own now, "were more than friends" during the trial. "We were inseparable back then," he said. He admits the two cautiously chose their words when asked about their relationship until this point. "I think I have told the truth. In lawyer land, a half truth is a truth," he said. Interestingly enough, though, endless nights at the office, ridiculous sexual tension, and mutual respect never led to kissing. "I’m not a kisser. Kissing is intimate. Kissing is more intimate than sex," the 60-year-old revealed.

"I think if I called her tomorrow we’d probably laugh our butts off," he continued. "Talk about our kids and people and talk about how we miss some people from the trial."

Whoa, that's huge. This isn't the first time we've received some sort of hint, though it is the first time it's been that straightforward. Previously, the best we got was a line from Clark's 1997 memoir, which was: "Chris Darden and I were closer than lovers. And unless you’ve been through what we went through, you can’t possibly know what that means."

With this, fans, Twitter, and the whole world can finally rest easy knowing efforts put into shipping these two since '95 have finally paid off.